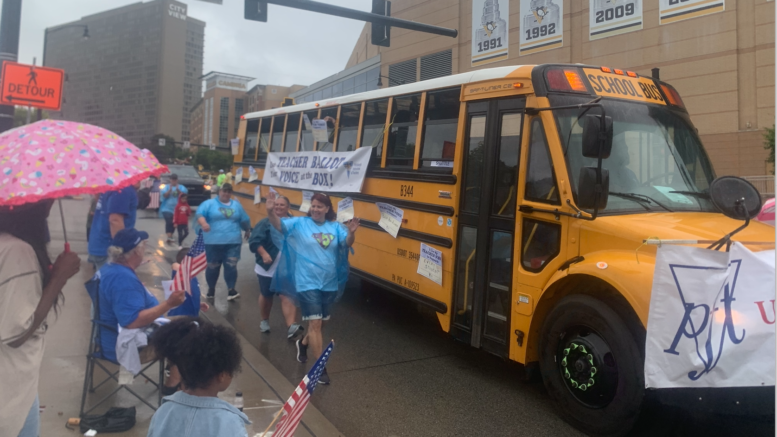 PITTSBURGH, PA.  – It’s the morning of the Labor Day parade around 8 a.m., and many union members are nervous that an early thunderstorm will return as a slow drizzle continues to fall.

For more than two years, the nation’s largest Labor Day parade held in Pittsburgh has been canceled due to COVID, and many are worried that the celebration of Western PA’s proud unions, in which tens of thousands of ordinary, working-class union members march, will once again be called off.

But today, for the first time since 2019, tens of thousands of union members and their families have assembled at PPG Paints Arena’s 28-acre hockey arena parking lot dressed in outfits color-coded by their union. Union members are setting up tents and grills and grabbing hot dogs before forming lines to file into the march, gathering behind the banners of their unions.

It’s rare for regular working folks to march through the streets of downtown Pittsburgh, but on Labor Day in Pittsburgh, you can. Now, with much excitement, and after a two-year hiatus, the Labor Day parade has begun.

“When you look at this, it’s pouring down rain, and we got one of the biggest crowds we ever had,” says 47-year-old Labor Council President Darrin Kelley, a local firefighter. “This is a signal that we rebuilt after the pandemic, and now the labor movement is taking over.”

Pitt Faculty members representing the over 3,000 newly organized faculty at Pitt are marching under the banner of the Steelworkers. Marching under the banner of United Museum Workers, also an affiliate of the Steelworkers, are art curators and museum staff representing the over 500 Carnegie museums. The recently unionized reporters at the NPR affiliate WESA and WYEP are also marching, while scores of grungy-dressed-in-black Starbucks workers from the dozen recently unionized stores are also in the crowd.

Some members of labor’s old guard have even embraced some of labor’s younger activists with construction workers carrying signs in the parade reading “Labor for Summer Lee”. (Previously, the construction unions had spent heavily to defeat Lee because of her opposition to fracking in a congressional primary that she won this past May.)

“Look at all these young people — it’s great!” says Darrin Kelly as he stands in front of the review stand that features a photo tribute to Jack Shea, the recently deceased 79-year-old labor leader who led the Labor Council for 30 years prior to 2017. “Jack is in all of our hearts — he would have been so excited by this.”

Many of the younger workers, who grew up hearing stories of the unions building Pittsburgh from their parents and grandparents, were also excited to be in attendance.

“I think a lot of the stores that have unionized in Pittsburgh have been looking forward to joining the sort of storied, Pittsburgh labor history,” says 28-year-old Starbucks union leader Jacob Welsh. “A lot of people were excited about being in the parade today.”

Welsh is part of a growing movement of people flocking to the labor movement. Union elections have been up by 58% since 2021. A new strike wave has already begun to appear this fall as labor unions have an approval rating of 71%, the highest ever recorded in the history of Gallup.

Shannon McBride is a 39-year-old nursing assistant on strike at “The Grove” nursing home in Irwin, where she has worked for 16 years. She’s part of a group of over 700 nursing home workers, members of SEIU, striking at 14 nursing homes throughout the state.

‘’We are on strike because we deserve fair wages, better health insurance. We are doing this for the residents — they deserve better care and consistent case management,” McBride says.

“Something happens when dreams get deferred,” Randi Weingarten, the 64-year-old president of the 1.5 million-member American Federation of Teachers, says as we walk poncho-clad in the rain. “People either abandon hope and that dream gets shriveled, they feel betrayed and angry, or, they rise up — and you are seeing people rise up.”

While educators enjoy widespread community support in some areas, Weingarten sees a ferocious counterattack against teachers coming in this fall’s election. Already, right-wing anti-union forces have poured tens of millions into attacking teachers’ unions that are calling for safe COVID conditions and the ability to teach about diversity and inclusion.

“They are going so hard against us because they know we are popular,” says Weingarten as we march down the Boulevard of the Allies to the sounds of cheers from supporters. “They are trying to make teachers a wedge issue in the election this fall, and they are failing.”

Likewise, despite Starbucks Workers United having organized a dozen stores in the Pittsburgh area, the corporate arm has been fighting back by firing workers.

But as raindrops hit young and old workers alike at Pittsburgh’s relaunched Labor Day Parade, there was a sense that things were moving and people were moving.

“It was really devastating at the time when I got fired,” says 23-year-old Starbucks worker Tori Tambellini. “But, you know, it’s only made me fight a lot harder.”

Donate to Help Us Cover a Changing Labor Movement

Be the first to comment on "On a Rainy Day, Labor’s Old Guard & New Energy Celebrate"