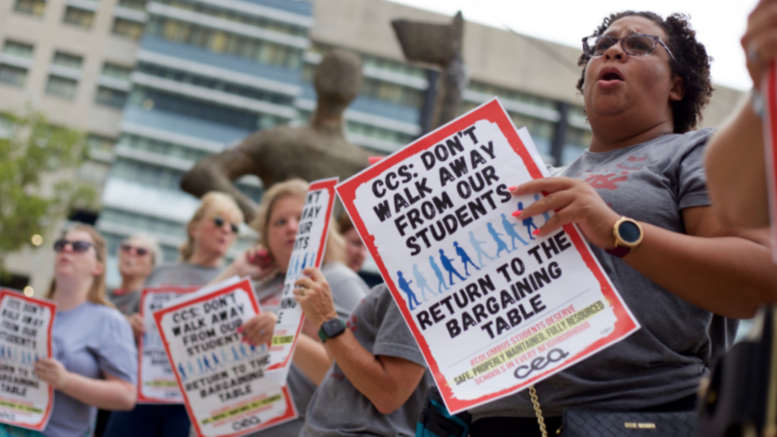 Greetings from the Burgh, where we are in close communications with our publishing partner, John Russell of the Holler, who’s on the ground in Columbus.

We will have a longer story and more videos tomorrow, but here’s a quick update on what’s happening in Ohio.

Several teachers in Ohio were injured yesterday when they were attacked with a pellet gun by a driver passing the picket line. But they’ll have to pay out of pocket to see a doctor since the Columbus School District cut off health insurance to all striking teachers.

“I am extremely troubled to hear that health insurance for striking teachers has been canceled,” said state Sen. Hearcel F. Craig in a statement. “I find it unconscionable to endanger the lives of teachers and their families, and I call on the Columbus City Schools to reinstate their health insurance immediately.”

As the strike enters its fourth day, teachers and the Columbus City Schools are at the bargaining table with the assistance of a federal mediator.

The Columbus Education Association has organized a GoFundMe to help provide for medical and other expenses. So far, the fund has raised $60,000. You can donate to their strike fund here.

Meanwhile, the school district is attempting to replace more than 4,000 striking teachers by hiring a crew of 600 substitute teachers to instruct via remote learning.

Out of Solidarity with the teachers, some parents are refusing to cross the “virtual picket line.” Others, however, fear that truancy charges could be brought against their kids if they do not cross the picket line.

A group of parents has organized an effort to fight truancy charges that could be brought against kids for skipping the virtual training by scabs. Some parents have even launched their own alternative education programs.

“We plan to spend the week talking and reading with our kids about the labor movement and unions, with some visits to picket lines,” parent Chris Wood of Beechwold told the Columbus Dispatch. “We have friends who are teachers and, thinking about what they’re sacrificing and putting at risk, we agreed that not going to class is the sacrifice we can make.”

For more on parents organizing in support of the strike, check out the Columbus Dispatch.

With devastating property tax cuts hitting school districts around Ohio, teachers elsewhere in the state are striking. In Niles, just outside of Lordstown, where a General Motors factory shut down in 2019, teachers are planning to go on strike next Thursday, Sept. 1.

The Niles school district already voted to cut off health insurance for teachers who strike.

Teachers there earn $6,000 to $8,000 less than teachers in surrounding school districts and say they are determined to strike.

“We cannot allow the base salary of our teachers to continue to hover around life support any longer,” NEA spokesperson Traci Kempe told the Tribune Chronicle. “What does that say about the future of the quality of education in the city of Niles? We will never be attracting, much less keeping, quality young teachers in the Niles School District.”

For more, check out the Tribune Chronicle.

Help us Travel to Niles, Ohio, Next Week

Payday Report hopes to be on the scene with teachers striking next week in Niles.

Donate to help us pay for the food, gas, and hotel necessary to cover this vital strike in a factory town that’s taken a beaten.

That’s all for today, folks. Donate to pay for gas to travel to Ohio to cover these important teacher strikes  And if you can, sign up as one of our 708 recurring donors today.

Thanks again for all the support & ideas.