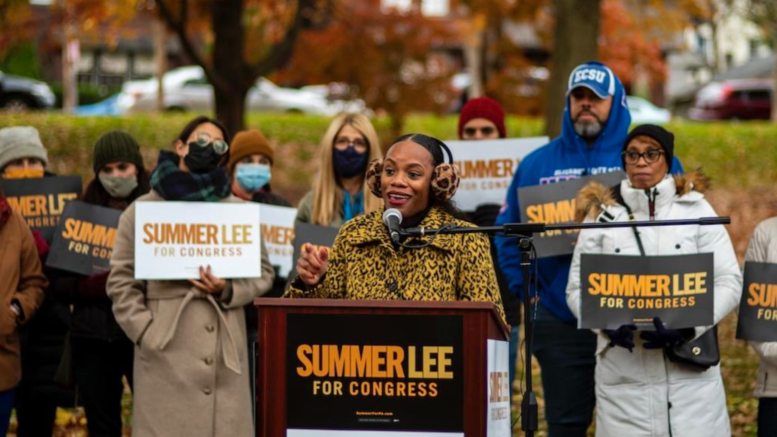 PITTSBURGH – Pennsylvania state Rep. Summer Lee was cruising to victory in a high-profile Pittsburgh-area congressional primary to be held next Tuesday, in the open-seat 12th District replacing longtime Rep. Mike Doyle. That was before big-money groups like AIPAC spent over $2 million against her, with dubious ads painting the progressive candidate as a Trump supporter.

It’s part of a strategy to use mountains of outside cash to stop progressives. But a more surprising aspect of the race is this: Despite the fact that Lee’s opponent, Steve Irwin, co-owned a law firm that did anti-union work, eight unions, largely construction unions, have endorsed Irwin, and are spending against Lee in the race.

Throughout her political career, Lee has struggled to win the support of organized labor, despite having previously worked as an organizer for the Fight for $15, which is backed by the SEIU.

Few unions have backed her because of her opposition to fracking, and her calls for a crackdown on pollution from U.S. Steel. When Lee ran for re-election in 2020, she was the only incumbent Democratic state legislator that the Pennsylvania AFL-CIO actively spent money against, with unions spending over $170,000 in an attempt to beat her. She still won with 72 percent of the vote.

In a famous incident in 2019, over 200 union members heckled and shouted Lee down for calling for a crackdown on violations of the Clean Air Act by U.S. Steel.

“I’m tired of being … intimidated and shamed for ‘threatening jobs’ when we still can’t go outside!” an exasperated Lee tweeted after the hearing.

However, Lee and her UNITE! PAC, which has unseated several incumbent Democrats in Pittsburgh, including the former mayor of Pittsburgh Bill Peduto, has slowly begun to win support from labor for policies like the Green New Deal. Additionally, Lee’s organizing efforts have helped inspire Black workers to unionize in Pittsburgh.

Her success offers a model of how young and particularly Black workers are changing the labor movement.

“I really think of her in terms of labor leaders like A. Philip Randolph,” says Black 41-year-old UE Local 610 President Swanny Gibson, a Wabtec manufacturing worker. “I think the labor movement is changing because people are fed up and realizing that they have the power.”

Gibson’s employer Wabtec is threatening to close its factory as it attempts to seek concessions from the union in contract talks. While unions like the United Steelworkers, whose members have faced numerous layoffs in Pittsburgh, have spent against Lee in the past, Gibson says the labor movement needs a broader view.

When Lee first ran for state representative in 2018, Gibson’s union, the United Electrical Workers (UE), was the only union that backed her in a bid that unseated 20-year incumbent Paul Costa. Slowly, Lee has grown her labor coalition, with other unions such as SEIU, the Pittsburgh Federation of Teachers, and UFCW Local 1776 endorsing her.

“I lived in her district for all of my life. Living in our district, the politicians in that community just didn’t seem to care at all,” said Gibson. “So when Summer came along, she was the first politician who was out and about, doing things for the community.”

(Full disclosure: Lee and I attended Woodland Hills High School together while it was still under a federal integration order, grew up near each other, and were once teammates on a track team.)

After winning in 2018, Lee founded the group UNITE!, which began primarying Democrats in Pittsburgh. In 2019, Lee backed Bethany Hallam, who toppled County Council President John DeFazio, who was the district director of the Steelworkers in Pennsylvania. (DeFazio died last year.) Then, Lee backed two state representative candidates, Emily Kinkead and Jessica Benham, who beat incumbents, as well as several judges.

“I couldn’t do it without her. Summer really inspired me and gave me the confidence that I could win,” Gainey told me at the time.

As a result of Lee’s political victory, the 34-year-old is now the front-runner in the race for Pittsburgh’s open congressional seat. Sen. Bernie Sanders (I-VT) visited Pittsburgh last night to rally with Lee against the flood of outside money.

Lee has not just achieved political victory but has inspired workers in organizing.

At Lee’s kickoff rally, 28-year-old Black Pittsburgh native Khalil Brown recounted how Lee helped him recover from panic attacks he suffered while attempting to unionize at UPMC, the biggest hospital network in the region.

Brown, 28, had risked his life during the pandemic working at UPMC Presbyterian hospital as a food service worker for $16.58 an hour. For two years, Brown said he had braved management and participated in walkouts and rallies, but this last August he found himself at a breaking point as he collected menu requests from patients.

“I went downstairs to go start taking menus … I just stopped,” said Brown, speaking to a crowd of 200 activists in Westinghouse. “And I just froze. And I just felt like I couldn’t move. And at that moment, I just realized I had to get out of there because I didn’t think I was gonna make it.”

Realizing he was having a panic attack, Brown walked out of work on August 3rd and went to the Resolve Crisis Center in Wilkinsburg to see a mental-health crisis counselor.

“I just felt like I’m on the edge,” he recalled. “And I just don’t want to go over that edge because if you go over the edge like that, when it comes to mental health, sometimes you don’t come back.”

As he was recovering, he got invited to a Zoom call from Lee, who was concerned about how he was dealing with the psychological pressures of organizing.

In April, Starbucks workers at their Bloomfield branch became the first store in Pennsylvania to unionize. Initially, some workers were on the fence, but after Lee showed up and held a passionate rally, the workers voted 20-0 to unionize.

As Election Day nears, the same group of activists who have been organizing with Lee for the past four years are once again at work: knocking doors, making calls, and even soliciting votes for her on dating apps. Confident from recent victories, many Black workers in Pittsburgh feel like they are building something bigger.

“As Summer always says, the power of the people is stronger than the people in power and things are changing in the labor movement because of her,” said Swanny Gibson.