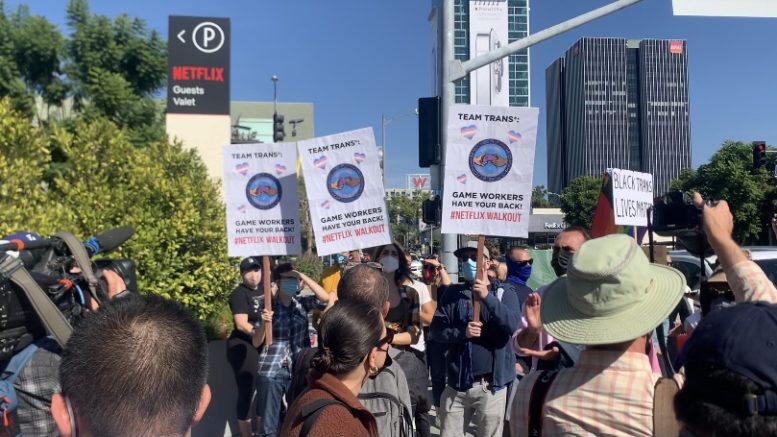 Greetings from LA, where Payday just attended a walkout of trans employees who were chanting “Trans Lives Matter” outside of Netflix’s headquarters in Hollywood.

Donate to help us continue to report here in LA.

Dozens of Netflix Employees Walk Out in Solidarity with Trans Employees

Today, dozens of Netflix employees walked out to protest the airing of Dave Chappelle’s “The Closer” comedy special, which many trans activists have considered offensive and dangerous to their community, which has been the target of numerous hate crimes.

Trans employees and their workers also drew attention to the need for better treatment overall.

“We [just don’t] need to be more inclusive, but we need equity, pay equity for trans employees, who rarely get promoted and make far less than their peers said,” said Sepi Shyne, the West Hollywood Mayor Pro-Tempe who spoke at the rally in support of trans employees.

Yesterday, socialist PA State Rep. Summer Lee, the first black woman elected to the State House from Western PA, entered the race to become the next Congresswoman from Pittsburgh.

Her announcement comes a day after 14-term Congressman Mike Doyle announced his retirement. Lee now enters the race as a front-runner.

Lee and her organization UNITE worked tirelessly to elect Gainey for mayor. In addition, Lee received the support of Justice Democrats, Alexandria Ocasio-Cortez, and more than a half-dozen local elected Pittsburgh officials, who her organization helped to elect.

Check out Lee’s powerful announcement video, which has garnered more than 850,000 views since its Tuesday release.

Also, be sure to check out Lee opening our Emmy-nominated CNN United Shades of America documentary “Where Do We Even Start with White Supremacy?”

At the University of Pittsburgh yesterday, election officials announced more than 3,300 faculty members voted to unionize with the United Steelworkers by a margin of 1511-612.

The election victory is one of the biggest union organizing wins in the country this year.

“I’m really excited. And I’m just so proud of our organizing committee and the literally thousands of faculty who put in time and effort to make this happen,” Pitt Professor Marian Jarlenski told The Pitt News. “I’m really confident it’s going to improve our University.”

For more, check out The Pitt News.

Donate to Help Us Stay on the Ground in LA

While there is a lot of action happening in Pittsburgh, we’re still here on the ground in LA as we pre-booked travel and accommodation for a week to cover the IATSE strike.

We are still out talking to IATSE workers as many continue their fight against ratification of the contract and 14-16 hour workdays. In addition, we are covering other stories, including organizing among Latino truck drivers in Southern California.

With Biden’s polling numbers beginning to sag, many have called on him to get out and walk picket lines with workers to show their support.

This week, the Biden Administration signaled that they were going to become more active in supporting strikes. Now Secretary of Agriculture Tom Vilsack, the former Governor of Iowa, is expected to visit John Deere picket lines.

For more, check out KCRG.

Dozens of workers at Child Haven, a Las Vegas group home that serves abused and neglected children, went on strike on Tuesday.

The union is calling on the Department of Family Service to increase hiring at the facility as workers claim understaffing has led to unsafe working conditions.

“According to a report from an independent study, to bring working conditions back to a safe level, DFS needs to hire 106+ new employees,” the union said in a statement.

For more, check out KLAS.

To see more strikes, make sure to visit our Strike Tracker that recently documented its 1,600th strike since the pandemic began in March of 2020.

Please sign up as one of our 625 recurring donors today.