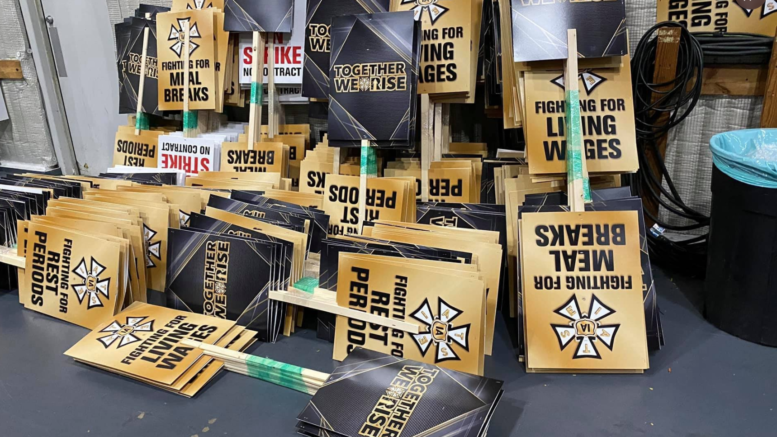 Greetings from the Burgh, where it’s been a hectic day as I’ve been desperately trying to find a dental clinic that will remove a broken wisdom tooth.

Keep on donating so we can get back to work.

In an unusually high-turnout vote, IATSE announced today that a proposed tentative agreement narrowly passed by a .6% margin.

Under IATSE’s complex voting system, a contract passes if a majority of its members vote for “basic agreement,” which covers workers based in Hollywood, as well as the “area agreements,” which covers film production workers not based in either NYC or LA.

However, a little more than half (52%) of union members voted for the “area agreement,” with the rest voting against it. As a result of the combined vote total from the members, the union contract narrowly was approved by a majority of IATSE’s 60,000 members by a margin of 0.6%.

The election was also one of the highest turnout elections in recent union history, with 72% of the union’s 60,000 members voting.

The tentative agreement would improve wages for many workers, bringing the salaries of streaming companies in line with studio companies. It would also infuse $400 million of cash into the pension fund, and lastly, offer higher penalties for skipping meals. (A full breakdown of the contract can be seen here.)

But while unions typically let their membership vote on a proposed contract within a week or two, IATSE delayed the vote for nearly a month. During that time period, the union used that time to aggressively push the benefits of the contract to its membership.

“From start to finish, from preparation to ratification, this has been a democratic process to win the very best contracts,” IATSE International President Matthew Loeb said in a statement. “The vigorous debate, high turnout, and close election, indicates we have an unprecedented movement-building opportunity to educate members on our collective bargaining process and drive more participation in our union long-term.”

Other members were less happy about it

“I am disappointed,” IATSE member Iván Herrara, whose work was covered by the basic agreement portion of the contract, told Payday Report.    “[IATSE’s] electoral system is what screwed us because the majority voted against the basic agreement.”

School bus drivers in Berkeley County are demanding to have these issues addressed as well in their school district.

For more, check out WSCS.

A strike of Akron Metro Regional Transit Authority bus drivers in Ohio was slated to begin today. However, the strike is now on hold as the executive board of the national union put the local union into temporary receivership.

For now, decisions for the local Akron union will be made by the national union’s leadership until an investigation of action by the local Akron’s union leadership can be made, as they wanted to assure passengers that there wouldn’t be a strike today.

For more, check out the Akron Beacon Journal.

Staten Island Amazon Workers Withdraw Petition for New Union
In Staten Island, the Amazon Labor Union (ALU), a new independent union, announced on Friday that it has withdrawn its request for a union election.

The union cited high turnover and a sophisticated anti-union campaign by Amazon as the reason it will not go forward with the union election right now.

“We will resubmit as soon as we can,” ALU leader Chris Smalls told Reuters.

Alright, folks, that’s all for today. Donate to our travel fund to cover the Huntington, West Virginia strikes as we’re planning on making a return trip. (Please be sure to check out our story from last week here.)