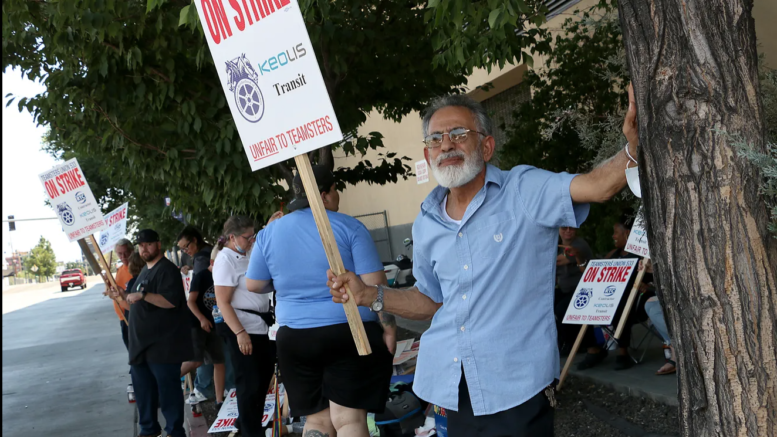 Greetings from the Burgh, where it’s another orange air alert day with the smell of sulfur and rotten eggs hanging over the city.

Donate to help keep my asthma treatment on bad air days like today.

Reno Bus Drivers on Strike For 3rd Time in 4 Months

Reno bus drivers, employed by private contractor Keolis, are on strike again for the third time in four months.

The striking began in August when the bus drivers, members of Teamsters Local 533, went on a 10-day strike. They ended that strike after winning agreements to some parts of their proposed contract. Then, they went on strike again in late September for 25 days and won additional agreements.

They hope to go on strike one last time to win final agreements on wage and pension issues. Currently, starting wages for bus drivers in Reno is $17 an hour, and the contractor’s proposed wage increase wouldn’t keep up with inflation.

“It’s sad because we drive around with these ads on our bus, these huge ads that say go do housekeeping at Grand Sierra Resort for $20 an hour,” Reno bus driver Amanda Nelson told Payday Report. “I’m like, why don’t we pay $20 an hour, why are we advertising for these places?”

The decision to strike comes after more than 90% of workers voted to reject the contract and only 6 of 90 bus drivers crossed the picket line. Workers hope this is their final strike as their finances have been stretched to the max after striking for 36 days in the past four months.

Already, the union has begun charity drives to help pay for Thanksgiving dinner as so many bus drivers in Reno have financially suffered. The company, however, has claimed that their last contract offer is their final offer.

For more, check out the Reno Gazette-Journal. (Also, be sure to check out our piece at Capital & Main on how bus drivers are fighting back and winning during the pandemic.)

Wages for positions as bus drivers in the district start at $12.21 an hour with no benefits. Bus drivers add that the wages aren’t high enough for the quality of work that they do.

For more, check out WRAL.

In Howard County, Maryland, school bus drivers won a one-time bonus of $5,000 expected to be paid out by mid-December. The increase comes after drivers there went on a half-day strike.

“They woke up but it was a little too late so we had to do what we had to do [and strike],” bus driver Dianne Withers told WBFF.

For more, check out WBFF.

Finally, a huge congratulations to 257 reporters at POLITICO who won voluntary recognition for their union yesterday.

Dave Jamieson, a veteran of the successful 2015 union campaign, looks at how the sale of POLITICO from the Allbritton family to the German media conglomerate Axel Springer created momentum for the union drive. In particular, Axel Springer temporarily suspended 401K payments for several months as the company took over, outraging many workers.

Workers have many different reasons for joining a union effort, and several Politico employees said they have broader concerns over pay equity and working conditions. But the temporary loss of a 401(k) plan hits everyone on the income scale who participates ― including high earners who might otherwise be lukewarm on a union ― and serves as a reminder of how easily benefits can disappear when they’re not contractual.

Gavin Bade, who covers trade for Politico Pro and is a member of the PEN Guild organizing committee, agreed that the 401(k) likely contributed to the union’s extremely high signup rate, though it was not “the overwhelming factor.” The committee tracked support over time and could see a boost after the 401(k) brouhaha.

“We were obviously talking to a lot of people throughout the newsroom, and pressing people to sign union cards,” Bade said. “But we definitely saw another surge of support after the 401(k) issue, and just solidifying support among people who might have been on the fence.”

Four other Politico and E&E staffers said they agreed with that assessment.

Alright, folks, that’s all for today. Donate to our travel fund to cover the Huntington, West Virginia strikes. (Please be sure to check out our story from last week here.)

Be the first to comment on "Reno Bus Drivers on Strike For 3rd Time in 4 Months – Fayetteville Bus Drivers “Sickout Strike” – Maryland Drivers Win a $5,000 Bonus"