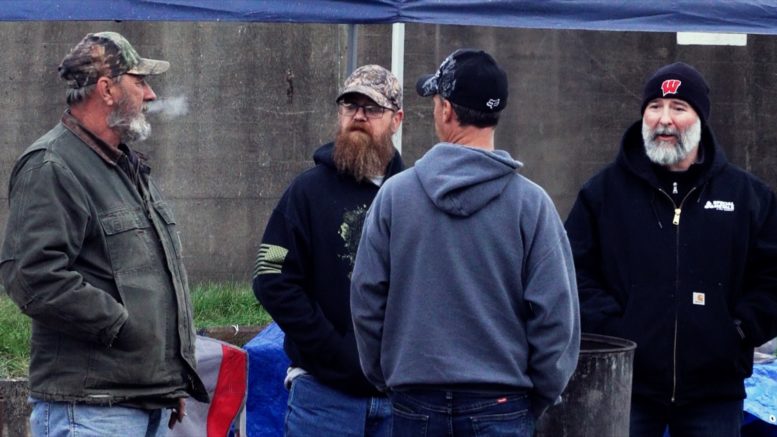 HUNTINGTON, West Virginia – As I arrive at the picket line outside of Special Metal’s 99-year-old plant here in Huntington, the workers seem surprised to see a labor reporter out there.

“Boy, are we glad to see you,” a steelworker tells me. “Nobody has been out to interview us at all.”

Another half dozen steelworkers huddle around the fire bin on this cold November evening in West Virginia. Others stand in front of the giant 20-foot flood walls that surround the gigantic plant based on the banks of the Ohio River.

The strike began October 1 after the company demanded cuts in overtime pay, seniority, and vacation days for the union’s 450 members, most of whom have worked at the plant for a decade or more.

Most drastically, the company demanded a drastic increase in healthcare costs that would force some workers with families to pay as much as $700 a month more in health insurance costs. The steep increase has many members unwilling to accept the proposed deal and head back to work.

“I think everybody is willing to stay out here as long as it takes, you can’t just can’t go back for that,” says Chad Thompson, president of United Steelworkers Local 40. “I think it will break a lot of families.”

While the union has offered to negotiate around-the-clock, Special Metals has not scheduled a bargaining session until December 14 and 15. In fact, since September 30, the company has not adjusted its proposal at all, leading many to believe the company is in for a long fight.

As we stand on the picket line, private security consultants sit in black cars with tinted windows and record the actions of workers on the picket line. Many workers declined to give their names for interviews out of fear of retaliation.

So far, the workers have drawn Warren Buffet’s Special Metals into a stalemate as the company has struggled to find “scab” replacement workers.

Many of the scabs, who came up from South Carolina to work at the plant, quit working there quickly in a matter of weeks.

“The first group that they got in here, they all quit,” says Buck. “They got their next group in there right now for the training.”

With the plant holding many Department of Defense contracts, it appears that Special Metals will struggle for some time to get the plant running without the skilled union workers of Special Metals in there who need specialized government certifications to work on certain government projects that the plant sometimes performs for the military.

Without the skilled unionized workers, one worker on the picket line said a manager even FaceTimed him from his old position in the plant to ask how he operated the machinery. Buthe union members are refusing to volunteer advice on how to keep the equipment running. For now, the company is struggling to get production back up and running as the union is standing strong together on the picket line.

Back on the picket line, workers are having fun, telling jokes, and working hard to build a sense of solidarity. Local supporters of the unions, many blue-collar, stop by with food, coffee, and words of encouragement.

One local hot dog shop owner stopped by with over 300 hot dogs wrapped in individual wrappers from the landmark chain Stewart’s, a historic 90-year old food chain owned by local WV Republican State Representative John Mandt Jr, who is stepping down from office at the end of his term this December.

“These [strikers] with special metals have put it all on the line,” says Mandt Jr., dropping off the hot dogs. “They’ve worked hard, they believe in what they do. It’s not okay that they’re not being treated fairly.”

Back at the Steelworkers Local 40 union hall, other workers organize food banks as some families struggle to put food on the table with workers out on strike.

However, Thompson, who was involved in the strike at the plant in 1998, knows that as the holidays approach, so too does the financial pinch on families.

“I don’t think you can prepare for it and I really don’t know if you can,” he says.

While talking with Thompson, union activists work busily behind him in the union hall organizing food banks and donations tables for those in need. For now, the 450 union members at Special Metals are digging in for a fight that will determine the future of their union.

“You can’t come in and take stuff like you just came,” says Thompson. “We’re not going to let them — that’s why there are unions.”

Donate to Help Us Continue to Cover the Huntington Strikes