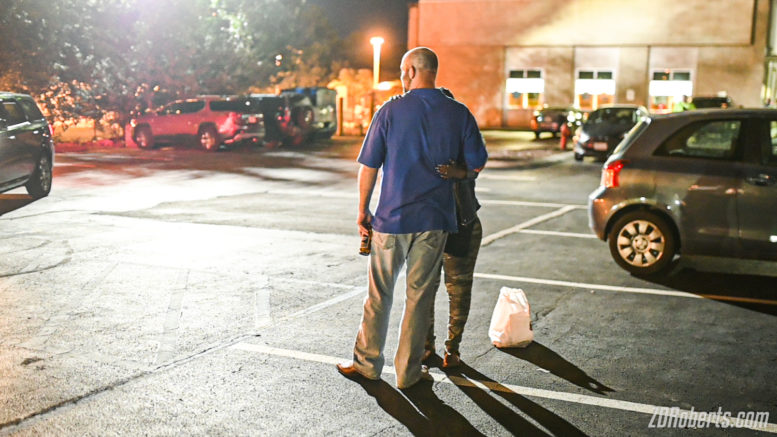 UAW Local 42 leader Billy Quigg hugs a co-worker in the parking of the UAW Local 42 parking lot following the defeat of the UAW for the second time at Volkswagen's plant in Chattanooga, Tenn in June of 2019. (Zach Roberts/Payday Report).

As I was talking on the phone to my old activist friend Austin Sauerbrei-Brown about how I felt traveling down to cover the Amazon union election, I found myself reflecting on the nearly decade-long battle to unionize Volkswagen in Chattanooga.

My friend Austin was the first paid organizer in many years for the Chattanooga Area Central Labor Council and had witnessed a new level of coordination and direct action by local unions in the wake of the defeat of two UAW drives at Volkswagen in 2014 and 2019.

I joked with him that I felt like a veteran of Dunkirk getting back on the boat for the invasion of Normandy.

More than seven years ago, I was in Chattanooga when the UAW union election was defeated by a margin of 712-626. The election was particularly painful given that the UAW was facing a corruption scandal at the time.

It was my first time in the Deep South as a 27-year-old labor reporter. I discovered that many Southern workers voted against the union not because they disliked the union, but because they saw the UAW as corrupt.

I wrote about my findings at the time in a New York Times opinion piece titled “Sweetheart Deals Hurt Labor.” Later, several top union officers of the UAW, including the president, pleaded guilty to federal charges of embezzling millions of dollars within the union while accepting bribes from automakers to cut backroom deals undercutting their members.

Now, a very different union election is happening at Amazon in Alabama.

Instead of an outside Northern union like the UAW saddled with corruption issues coming in, RWDSU, which has 15,000 members in Northern Alabama, has largely driven the election from the local union based in Birmingham instead of the international one based up North.

In the Chattanooga campaign, anti-union groups ran TV ads, billboards, and even video advertisements at gas station pumps with photos of bombed-out factories warning that if workers voted in a union as corrupt as the UAW, it would lead to their town becoming the next deindustrialized Detroit.

Unlike the Detroit-based UAW, the RWDSU union has avoided being painted as outsiders while mobilizing national and international support on behalf of workers. While UAW lost momentum in the closing days, RWDSU has been gaining momentum especially after President Joe Biden endorsed the union drive in late February.

“I think it’s exciting to see this sort of organizing happening in the south,” Sauerbrei-Brown told me, seeming excited about the possibilities. “And, you know, I think it has a lot of implications for potential new organizing to happen specifically in this moment coming out of COVID-19. I think there’s a lot of energy and excitement and enthusiasm to see the potential of something happening at a scale.”

I decided to seek out old union activists that I had met at Volkswagen over the last decade. But as I made phone calls to 10 different Volkswagen that I had known for years, I had trouble finding any of my union sources that still worked there.

Without a union, many Volkswagen workers, who had supported the union, faced targeting and harassment following each defeat. Worse, many become disillusioned with the UAW as it faced corruption scandals and complaints that they didn’t pump enough resources into the fight.

“After what happened with the UAW, I just couldn’t really care less. So many of these unions only care about their dues members,” one former Volkswagen worker, who wished to remain anonymous, told me.

Many Volkswagen workers, who have struggled to keep the union spirit, have experienced burnout and despair as they’ve come close to unionization twice, but have ultimately failed to reach enough votes by only a few dozen votes.

In June of 2019, the UAW lost by a narrower margin than in 2014, losing by a margin of only 67 votes in a vote of 833 to 766. Workers were optimistic that maybe the union could try again in two years, but two years later, there doesn’t seem to be much momentum for a third try in Chattanooga with the UAW having dramatically scaled back its staff presence in the region.

Now with the UAW struggling to keep the momentum going in Volkswagen’s Chattanooga plant, many of their union activists have simply left for better jobs, leading to a demoralizing drain of experienced union leaders at the plant.

“I left in February of 2020,” said Billy Quig, who led a successful pre-holiday wildcat strike over paid time off issues at the German automaker in December of 2018. “It was the happiest decision of my life.”

Still, others, who had kept working inside the plant were scared to speak up as Volkswagen regularly monitors social media and has been accused of targeting workers who speak out publicly.

“They’ll fire you and it just ain’t worth it especially with a union look far off,” said another current Volkswagen worker, who also wished to remain anonymous for fear of retaliation.

“We have a whole bunch of facilities in Chattanooga that we have a lot of under-privileged community members that work there. So if this movement goes full spread to all Amazon facilities, then that would help our community also,” said local union activist Erin Kellam, a member of IATSE.

A win at Amazon could be a gamechanger for union organizers attempting to overcome the despair inflicted by anti-union psychological warfare.

“I think seeing an example of this kind of organizing in the South, and especially just right down the road, and especially seeing a facility that’s predominantly black workers, and in a region where there’s a long history of black-led organizing, I think that’s incredibly inspiring for everyone in the south, and certainly, for folks in Tennessee,” Sauerbrei-Brown said.

If the RWDSU does lose this election at Amazon in Alabama, the union will have to dig-in with serious resources for a long fight, and perhaps as long as the 15-year campaign by the UFCW to unionize 5,000 workers at Smithfields Foods in Tar Heel, North Carolina, which won in 2008. (Unions often lose union elections and win them on the second try like workers with the IBEW at Electrolux in Memphis in 2016 and Kumho workers with the Steelworkers in Macon, Georgia in 2020.)

In a statement, the UAW said that despite a scaled-back presence, the union is still committed to eventually winning a nearly decades-long battle to unionize Volkswagen’s Chattanooga plant.

“Like nearly two-thirds of the general public, workers at Volkswagen understand the value of forming a union and engaging in collective bargaining. These workers continue to discuss the best path forward, especially knowing how hard companies like Volkswagen will try to intimidate and pressure their co-workers into opposing unionization,” said UAW spokesperson Brian Rothenberg in a statement emailed to Payday Report. “We will continue to support and stand behind these workers as they organize and fight to win their union.”

The stakes at Amazon in Alabama are high. If the union wins, it could open the door to more organizing. If the union loses, many workers could be intimidated and disillusioned like the workers at Volkswagen were after their two failed union elections under the leadership of a troubled union.

But workers at Amazon in Alabama are optimistic that they can avoid the fate of the UAW in Chattanooga.

The next week in Bessemer, Alabama could change things for burned-out workers in Chattanooga. It could provide a new symbol of hope for workers throughout the South.

But if workers lose, even narrowly, the labor movement must be prepared for a long fight and avoid the fate of UAW at Volkswagen in Chattanooga as so many workers all over the country have placed so much hope on workers at Amazon in Alabama.

“We know that it’s a long-term struggle,” said Sauerbrei-Brown. “And I think the more that people see each other standing up together, you know, that’s a step.”