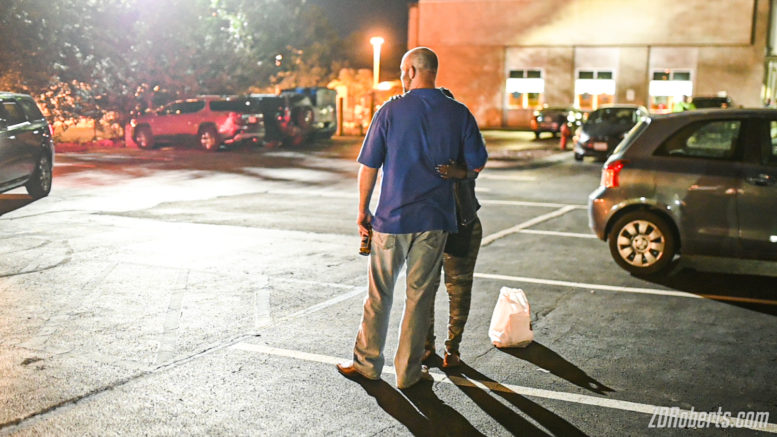 UAW Local 42 leader Billy Quigg hugs a co-worker in the parking of the UAW Local 42 parking lot following the defeat of the UAW for the second time at Volkswagen's plant in Chattanooga, Tenn. (Zach Roberts/Payday Report).

CHATTANOOGA, TENN – Hours after the UAW received the heartbreaking news that the union lost by 29 votes in its second attempt to unionize Volkswagen’s Chattanooga plant, 33-year-old Marine Corp veteran Billy Quigg is leaning up against his sister’s silver Ford Ranger pick up truck with a beer in his hand.

Quigg, a Volkswagen employee and the recording secretary of the plant’s minority union UAW Local 42, is bummed that the UAW has lost, but also excited about the future.

“While I am hurt, it also strengthens me because I have seen such an outpouring of support from co-workers,” says Quigg. “I have seen a lot of people push and stand up to the company on a lot of issues.”

Quigg’s eyes light up as he begins to recall the day that he led a wildcat strike against the company and gave many workers a new sense of confidence. He says that the wildcat strike could be a model for how UAW Local 42, a minority union, could continue to build support through shop floor action despite lacking collective bargaining rights.

Right before Christmas, Volkswagen gave its workers a lump of coal when it announced that it was eliminating more than 60 hours of paid time off that workers could use during biannual unpaid plant shutdowns.

On December 21st, Quigg helped organize a group of 45 workers primarily from the door assembly line to shut down production around 10 am that morning. Then, they marched upstairs to HR, where they insisted that they would stay until they could talk to management about the loss of their paid time off.

“I led it and as we walked up to the stairs and I can tell you there were butterflies in my stomach. I am a Marine veteran that was almost … the most nervous I’ve ever been. I got two kids at home, I got a wife — and what happens if [the company doesn’t] listen,” says the grizzled face Quigg.

“Every step I took, I got more and more nervous until I got to the top and I finally looked down the stairwell when I saw my co-workers in back.  Knowing that not only was I in front of them as a leader but that they were behind me pushing me – that’s a great feeling,” says Quigg.

“Then, when you walk into the main part of HR’s office, and you got 45 people strong coming through there, and all of these people were never expecting, never had any idea that would happen, look up from their desk and look completely shocked. That was a damn good feeling!” says Quigg as he laughs.

Quigg and his 44 co-workers met with management and explained in vocal terms how the changes to paid time off negatively affected families. Management listened.

The wildcat strike had begun at 10 am and ended shortly before noon. However, by 1 pm, management stopped assembly line production to read a special message announcing that the administration had reinstated the paid time off requested by the wildcat strikers.

“That was a great feeling – that’s really when we had a first true taste of solidarity,” says Quigg.

Previously, UAW Local 42, the minority union established after the union’s initial loss by 43 votes in 2014, had held meetings and called on the company to make changes. However, the wildcat strike on December 21st was the first time the union had won big changes through direct action; leading to a surge in support for the union.

He says that the wildcat strike led many workers to shift their expectations of what UAW Local 42, even as a minority union, could do.

“It felt great [that] the union was now ‘oh you guys can actually do something’ — let’s not just talk about how great it could be, but we’ve seen what you can do,” says Quigg. “Local 42 had been here for a long time. We started the local in 2014, but that was the first time that workers felt solidarity, felt like they had a voice”.

The new burst of enthusiasm persuaded the UAW to invest big, sending more than 40 UAW organizers down to assist in the union election, and spending tens of thousands on pro-UAW TV ads to build community support for the union drive.

Unlike the first union election in 2014, which was driven more by UAW staff, Volkswagen workers say that the militancy on the shop floor led to the election being called this time around.

“We had an actual grassroots movement because none of this happened until we pushed. So once the UAW saw that we were pushing back against the company, it made a big difference,” says Quigg.

“If we didn’t have such an anti-union onslaught from the company, I think people would talk about that [wildcat strike] and realize that man we really can do something,” says Quigg.

However, during the union election, the company and its anti-union allies were able to completely change the conversation by focusing on the corruption scandals embroiling the UAW in a federal investigation.  The UAW has seen 4 top officials convicted for accepting bribes from Chrysler in exchange for concessions at the bargaining table; an issue that anti-union forces hammered away at in billboards, facebook ads, and TV ads.

The company repeatedly warned workers that the UAW officials from Detroit wouldn’t look out for Chattanooga workers, but instead use them as dues-payers to prop up their own “dying organization.” The company warned that this could result in disaster, citing the 1988 closing of its unionized Westmoreland County, Pennsylvania plant.

(Full Disclosure: My mother worked on the assembly line at Volkswagen’s Westmoreland County plant and was involved in several wildcat strikes there)

Fisher sent a letter to all employees apologizing for the previous mistreatment of plant workers while asking workers to give management one last chance to improve things before bringing in an “outside organization.” In one captive audience anti-union meeting, Fisher told workers that it would be better to have someone, who knew the plant, help fix things rather than an outside group like the UAW.

“I’d rather have someone who works and breathes the same air that I do represent me than someone up in Michigan, who don’t know me, who don’t know shit about me or what I go through every single day,” says “Chuck.”

Chuck, a worker in his early 20s, who has worked at the plant for a year and a half and makes $17 an hour, nearly doubled what he made at his previous job.  For many young Southern workers, the job at Volkswagen is the best job that they have ever had in Chattanooga, where wages are 15% lower than the national average.

Many workers like Chuck also have never been members of a union and know little about how unions or collective bargaining operates.

When Volkswagen management brought back Frank Fisher and issued a letter personally apologizing for the treatment under previous management, it persuaded many workers that it was best to stick with familiar faces rather than take a gamble on the UAW, which could lead management to close the plant.

Union leaders like Billy Quigg tried to point out to their co-workers that the company only brought back Frank Fisher to appease UAW Local 42’s demands for change. However, in a plant where turnover is high, and the majority of workers had not experienced the previous union election five years ago, most did not listen.

Knowing little about unions, workers like Chuck bought the anti-union side’s argument that the UAW was a corrupt organization from up north in Detroit that would put the UAW leaders’ personal interests ahead of member service.

“Honestly, I think [a union] would turn into a good old boys’ club, where if you are part of the union, you are inside that circle, you can be well taken care of. Anybody outside of that circle is going to be treated like a second-class citizen,” says Chuck.

However, Chuck, a Tennessee native, says that while he’s not entirely opposed to unions, he felt uncertain about a Northern union coming down to represent him.

“If it was a union from around here, it wouldn’t be so bad. I’d much more open to it if it was someone from Chattanooga representing me versus someone from Michigan,” says Chuck.

Now, it’s up to shop floor leaders like Billy Quigg to persuade workers like Chuck that the union is a local union that represents them. Quigg says more actions like the wildcat strike could help build trust in UAW Local 42 being an organization made up of workers like themselves that is willing to take risks to stand up for them.

“You can’t back down, you can never let it die out because there is always hope,” says Quigg.

Hardly giving up, Quigg says the vote — which the company won by only 29 votes — was closer than the 2014 election and motivates union activists like him to keep pushing. Quigg says that his union, both through actions and education, isn’t going to give up on trying to get workers like Chuck from believing in the union.