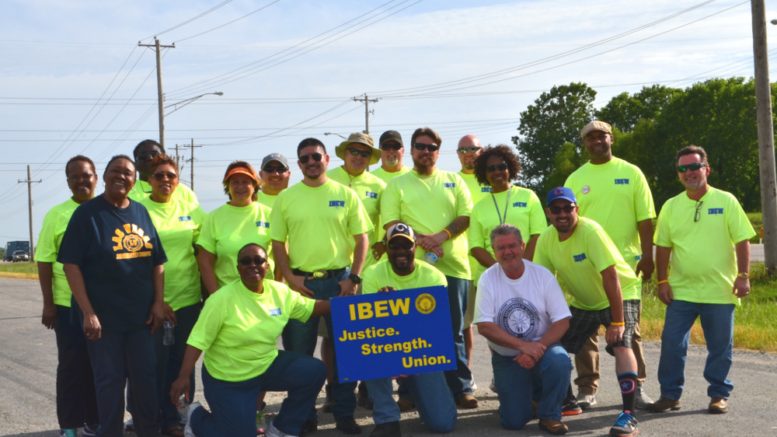 A blowout 461-193 union representation election in favor of the IBEW at Swedish oven manufacturer Electrolux in Memphis has the IBEW optimistic about organizing in the South. The victory comes after the IBEW was defeated by a margin of 57 votes in May of 2015. The turnaround of workers’ attitudes towards the union is vindication of the IBEW’s southern organizing strategy.

Before the previous election, Electrolux management told workers that conditions would improve at the plant, where workers earn $10 an hour making high-end ovens that sale for $10,000. Instead of giving up, the IBEW continued organizing.

“We never stopped from last year,” said Paul Schaffer, who was the lead organizer on the campaign. “Our volunteer organizing committee kept fighting and kept going on strong.”

Schaffer said that the company held captive audience meetings criticizing the IBEW, despite it being a unionized company in Sweden that often touts its good relations with unions abroad. Management told workers in these meetings that the Memphis facility might be shut down if workers voted to unionize. However, the IBEW – with the help of IG Metall, who represents thousands of Electrolux workers in Sweden – was able to push back against this rhetoric.

The two unions worked hard to educate workers on the reality that the company was unlikely to close the plant anytime soon. In part, this is because the facility received more than $150 million in public subsidies for its construction just a few years ago and continues to receive local and state tax breaks.

Eventually, workers began to see that the promises that Electrolux had made to defeat the first union campaign were empty. According to Schaffer, workers at the plant began to see other union activists get fired. In Schaffer’s view, the company’s arbitrary discipline policies are what helped the union persuade workers that the company could not be trusted.

“They didn’t feel like the system of discipline was being administered fairly or consistently,” Schaffer said.

IBEW organizers were quick to tout the win at the 750-person plant as a sign that organizing in the South is not impossible – it just requires dedication.

“I think that this campaign is a good indicator of what the South is ready to do,” said John Murphy, the IBEW’s Organizing Coordinator for Tennessee. “The Electrolux victory has proven that [workers] can be successful and the IBEW has proven that we can assist them in their efforts to gain respect.”

Murphy said that the win at Electrolux has opened the door for organizing opportunities elsewhere. “Not only manufacturing workers are looking for opportunities to improve their lives but skilled tradesmen,” said Murphy. “We got a lot of organizing campaigns going on right now.”

Be the first to comment on "On Second Try, IBEW Scores Major Victory for Southern Organizing at Electrolux"