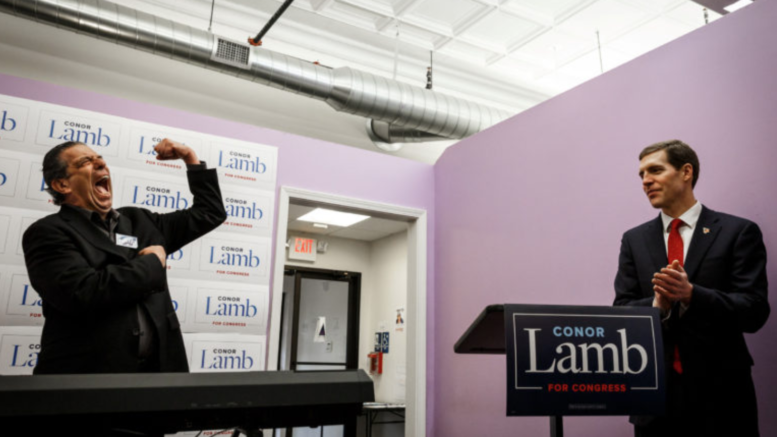 Jon “Bowzer” Bauman was a household name in the 1970s and 1980s as the leader of the band Sha Na Na. However, he’s not very well known to a generation of Americans under 45.

Bowzer both starred in Grease in the band at the school dance, and performed the bulk of the movie’s soundtrack. Later, the band hosted a hit variety show called “Sha Na Na,” and Bowzer became one of the first VJs on VH1.

Today, Bowzer, who now serves as President of Social Security Works PAC and as Vice Chair of the DNC’s the Senior Council, still tours and plays shows, but for different reasons and venues.

“I love this crowd. This is exactly my kind of crowd!” Bowzer told me he set up his piano in the back room of Lilja’s Pizza in Hempfield, PA, to play for a crowd of approximately four dozen activists during the 2018 election. (Read our full dispatch on Bowzer barnstorming throughout Western PA)

Now, Bowzer plays approximately 50-60 shows every election cycle on behalf of Democratic activists, often in the back of pizza parlors, VFWs, and Get-Out-the-Vote rallies, posing with old fans with his signature arm flex move.

However, under the age of 45, few have watched his TV shows. Often, they are first introduced to Bowzer when they hear him play at an activist event.

“I love it, it’s allowing a whole new generation of fans,” says Bowzer.

Most importantly, Bowzer loves connecting with younger fans because it allows him to demonstrate how intersectional senior issues are.

Bowzer also says that senior activists, many of whom got their starts in their civil rights and anti-war movements, also care deeply about many other issues.

“Older people are very much conscious of what kind of world are we leaving to our kids and our grandkids,” says Bowzer. “So it’s not like seniors just deal with Social Security and Medicare and Medicaid and drug prices. We’re constantly in seniors organizing, dealing with climate, voting rights, and, and women’s issues”.

78-year-old Robby Stern, President of Puget Sound Advocates for Retirement Action, is emblematic of a new generation of senior citizens that is much more radical in their activism than previous generations.

“I started with the civil rights movement, and the anti-war movement, became an activist in the labor movement,” says Stern. “And so it’s just simply carrying on the work that I’ve done all my life, different issues, but just continuing to do it.”

When Stern set out to help start Puget Sound Advocates for Retirement Action, he and many activists didn’t just want an organization that took on what were traditional senior issues.

“Of course, we became active on issues like climate change and racial justice, racial and economic justice, and became also a senior supportive group for younger people that were fighting the battles that come up around income inequality and respect on the job,” says Stern.

Often, the key to successful intergenerational organizing is finding links between struggles.

Marianne Pizzitola is the president of the NYC Organization of Public Service Retirees. A 53-year retired, disabled EMS worker, she leads one of the most vocal and militant retiree organizations in New York City that has been taking on Medicare Advantage plans.

“Younger retirees were mostly fired EMS police, where most of us are disabled on duty,” says Pizzitola.

Many disabled Americans have relied on Social Security and Medicare for decades. However, these

“We don’t have the money to do [print mailings]” says Pizzitola. “And you’ll struggle with educating seniors, to learn how to utilize the tools of Zoom, mute buttons, where the camera is, how to even work their camera, and it requires a lot of patience.”

However, in addition to teaching seniors how to utilize social media, Pizzitola says that her group regularly does in-person meetings, flyers at senior citizens’ centers, and does active phone outreach to senior citizens with limited mobility.

Senior citizens of this era may be some of the most progressive senior activists in history; focusing on issues that traditional senior groups did not focus on as much in the past. However, massive barriers exist to connecting this new class of senior citizen activists to younger activists.

“The biggest challenge in intergenerational organizing is the way in which everybody tends to be siloed. And we need to get over that, you know, the siloing in general is just a mistake,” says Bowzer.

“I love getting out the road. I really missed it,” says the aging Jewish Doo Wop Star. “I love interacting with young activists because that’s who we are going to leave this mess to when we are gone. They are the ones that gonna have to figure out how to fix this”.

This is the first of a three-part series on “The New Class of Senior Citizen Activists,” underwritten with a grant from Social Security Works.

Donate to Cover the New Class of Senior Citizen Activists