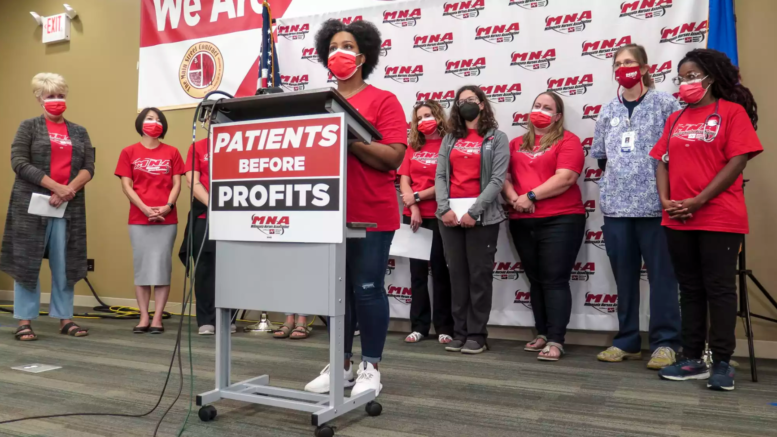 Greetings from the Burgh, where I have begun fostering a Puerto Rican street dog from the group “Save a Friend Puerto Rico”. The group collects stray dogs in Puerto Rico, where there is a massive problem with strays, and flies them up to Pittsburgh to find homes. (Check them out and consider adopting one if you live in Pittsburgh)

Dylan arrived in Pittsburgh two days ago and I can’t imagine how bewildering it must be for him to suddenly be living in Payday Report HQ.

Save the Carpet Fund

Until arriving in Pittsburgh, Dylan lived primarily in the forest in Puerto Rico and wasn’t properly housetrained. When I take him for walks, he seems to be over excited by all the beautiful sights and smells of Pittsburgh and doesn’t use the bathroom; he prefers to use my carpet when we get back.

Please, if you can, sign up as one of our 710 recurring donors today so we never have to worry about cleaning up shit stains.

The Minnesota Nurses Association, one of the most militant unions in the country, yesterday gave 10-day notices that nurses intend to strike at 15 different hospitals owned by a variety of chains throughout Minnesota.

“Corporate healthcare policies in our hospitals have left nurses understaffed and overworked, while patients are overcharged, local hospitals and services are closed, and executives take home million-dollar paychecks,” said Chris Rubesch, RN at Essentia in Duluth and MNA  vice president. “Nurses have one priority in our hospitals, to take care of our patients, and we are determined to fight for fair contracts so nurses can stay at the bedside to provide the quality care our patients deserve.”

While it’s unclear how many ultimately will strike, with so many different Minnesota hospital chains targeted, the likelihood of major hospital strikes is high.

To see a full list of the hospitals, go here.

In Southern California, more than 150 workers, members of the non-traditional labor group Inland Empire Amazon Workers United walked off the job at San Bernardino Amazon Airhub. The walkoff is one of the largest labor actions at Amazon to date.

Workers, many of whom make as little as $17.30 an hour, say they simply can’t survive on those wages in Southern California.

“We’re not making enough to save anything,” Sara Fee, a lead organizer of Inland Empire Amazon Workers United told the Washington Post. “If something goes wrong with my car, I don’t have savings. I can’t afford to eat healthy food. I have to buy chicken nuggets or noodles.”

At a popular South Carolina pizza chain MOD, workers have gone on a strike over complaints of racism.

“Management is very disrespectful towards workers of color,” Rae Evans, a MOD Pizza employee, told The State. “I’ve watched our general manager yell at my coworker for studying, while her white counterpart is allowed to do school assignments at work. … White workers get leeway from management while Black workers get constant disrespect.”

For more, check out the State.

Nurses at 39 facilities owned by 3 different nursing home chains throughout Pennsylvania are threatening to strike over understaffing and underfunding.

“Earlier this year, it got so bad that we actually were rationing ravioli,” Donna Pronio, a CNA at a nursing home in Shenandoah told WOLF TV. . “Literally counting the number each resident got on their plate because we barely had enough to go around.”

For more, check out WOLF.

Finally, a Tik Tok group calling itself “Gen Z for Change,” with a combined following of more than  51 million, is targeting Amazon by launching a campaign called “People over Prime Pledge” The Washington Post has more on how this could helping organize efforts at the company:

The campaign is a public setback for Amazon, which has sought to develop tighter relationships with young influencers in recent years. In 2017, the company launched the Amazon Influencer Program, allowing creators to earn revenue by recommending products in personalized Amazon storefronts. Earlier this year, Amazon flew more than a dozen Instagram, YouTube, and TikTok stars to a luxurious retreat in Mexico to encourage influencers to grow their presence on the platform. In June, Amazon built a massive VIP lounge at VidCon, an annual conference for online video stars, where influencers could learn about ways to work more closely with the company.

“I think their method of offering influencers life-changing payouts to make them feel as if they need to work with them while also refusing to pay their workers behind the scenes is extremely wrong,” said Emily Rayna Shaw, 24, a TikTok creator with 5.4 million followers who has partnered with Amazon in the past. “I want to feel comfortable recommending Amazon products to my community because it is so reliable, but I can’t do so until I know that they are treating their workers fairly.”

Alright folks, that’s all for today, we are taking a few days off from the newsletter for a retreat of staff here in Pittsburgh. We will have plenty of content pre-programmed while we’re away.

Donate to help us continue bringing you labor news. Please if you can, sign up as one of our 710 recurring donors today

Be the first to comment on "15,000 Nurses to Strike in Minnesota – Nurses Forced to Ration Ravioli Could Strike – Amazon’s BIG Tik Tok Problem"