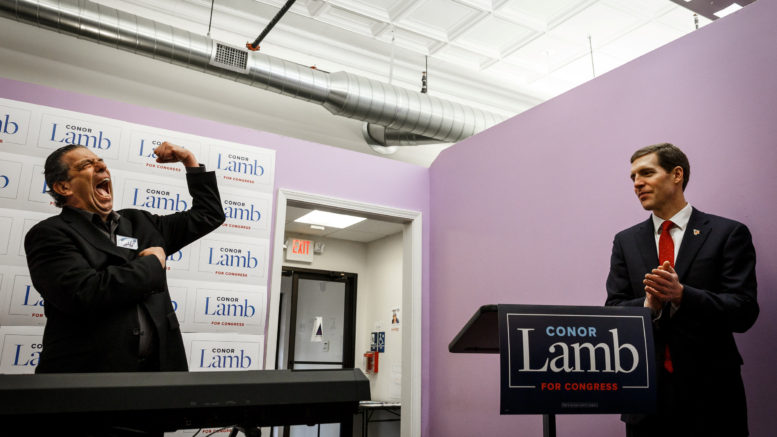 Hempfield, PA – “I love this crowd, this is exactly my kind of crowd!” shouted Jon “Bowzer” Bauman of Sha Na Na fame as he set up his piano in the back room of Lilja’s Pizza in Hempfield, PA while a crowd of 30 local Westmoreland County Democratic Committee Members passed the hat to share the cost of that night’s pizza pie.

“I love Western PA,” Bauman said as he unbuttoned his shirt to reveal a Steelers t-shirt.  Western PA is familiar territory for the Bowzer, whose band Sha Na Na would sometimes sell out three nights in a row at the old Stanley Theater back in the late 1970s when their TV show was a smash hit.

“I love being here with all of you,” said Bauman as his voice shifted into TV-character mode. “And I’m here to say that on the night of March 13th, Conor Lamb is gonna be doing this!” Bauman then gave his signature fist bump as the attendees put down their pizza to clap for him.

The 70-year-old “Bowzer” was featured in the movie Grease and his band Sha Na Na opened Woodstock for Jimi Hendrix, but he is best remembered for his hit variety show Sha Na Na that was focused on the music of the 1950s and syndicated nationally for four years.

A pioneer in the field of reviving 1950s Doo Wop, which he dubs “the classical music of Rock N’ Roll,” Bauman occupies a unique position for a celebrity. For a generation of millennials, he is as obscure as the soda shops where doo-wop once roared from radio speakers, but to a generation of people approaching retirement age, he remains a household name.

After he finished his warm-up routine, the “Bowzer” got serious and began speaking in the voice of Jon Bauman, political activist.

“You all know that I love the music of the 50s and 60s, but that does not mean that I want to return to the 50s and 60s,” Bauman explained. “The early 60s were a time before Medicare when over 35% of the senior population lived below the poverty line.”

“And I certainly don’t want to return to a time before Social Security was passed in 1935 when, think about this: over 50% of Americans over the 65, more than 1 out of every 2 seniors, lived in poverty,” said Bauman.

“Social Security and Medicare are two of the most important social programs in the entire history of the United States of America and we need to keep them intact,” Bauman said, his careful remarks earning the wild applause to the crowd.

Still a self-described “roadhog” at age 70,  “Bowzer” now performs 100 events a year on behalf of candidates supporting his progressive politics. He says that while he may not be the biggest name anymore, his skill as a performer and charismatic presence still inspire people.

“I think my celebrity helps with revving up the troops, getting people excited to do the stuff they are doing anyways in some cases, but, you know, I’m trying to get them further motivated to do it even more and realize how important it is,” said Bauman.

“Volunteers are more than just the lifeblood of campaigns,” Bauman continued.  “They are way more important to campaigns than the volunteers could ever realize but often there is no one to tell them that. I go out of my way to remind them how valuable they are. People knocking on doors are tremendously important because that’s how you win.”

Tonight, “Bowzer” is pitching the activists in Westmoreland County on the necessity of promoting Social Security issues when going door-to-door in the district on behalf of Conor Lamb in the #PA18 special election.

Nearly all polling shows Lamb tied head-to-head with Saccone, and all polls show seniors constituting one of his key bases of support.

In 2016, seniors voted for Trump by a margin of 53%-45%. If seniors in Western Pennsylvania break for Lamb, Bowzer remains convinced that Paul Ryan’s plan to cut Social Security and Medicare would be essentially dead in the water.

My native Westmoreland County is where the Democrats will have to stop the bleeding if they are to win. While polling from Monmouth shows Lamb leading by a margin of 54% to 40% in the white-collar suburban Pittsburgh areas of Allegheny County and running neck-and-neck in coal counties like Greene and Washington along the district’s West Virginia border, it is in Westmoreland where his campaign could ultimately falter as he trails Saccone by a staggering margin of 63% to 32%.

“You guys really are ground zero,” Bauman told the Westmoreland County crowd. “The whole country is watching this.”

With Pennsylvania having the fourth highest opioid death rate in the country, former federal drug prosecutor Lamb has used his campaign ads to focus on how important entitlements like Social Security and Medicare are to the ravaged region.

“I met a guy the other day who is 65, and he was taking care of his 14-year-old niece because there was no one else to do it,” said Lamb in his TV ad “Entitlements.” “And if you mess with his Social Security, he won’t be able to take care of her anymore.”

As seniors over age 65 make up a whopping 140,000 voters in the district, Lamb’s focus on senior issues will likely make the difference between victory and defeat. And it’s an issue that resonates deeply with many people including himself, “Bowzer” explained to the crowd.

“I refer to doo-wop as the classic music of rock n roll, but a lot of you don’t know that I started out in real classical music that sounds like this,” said Bauman as he played a few notes of Chopin on his portable piano.

“I started playing the piano when I was 7 years old and I started at the Juilliard School of Music at age 12. If you are a little kid learning how to play classical music in New York City, going there is a dream come true,” said Bauman.

Finally, in 1973, “Bowzer” and his band Sha Na Na were invited to play at Carnegie Hall.

“So there we were, Sha Na Na playing at Carnegie Hall,” said Bauman as he once again dropped into his TV character’s voice.

Turning back to his activist voice, he then segued into a more serious story by playing his mother’s favorite melody, Chopin’s subdued “Prelude in E Minor.”

After he stopped playing, “Bowzer” broke the somber mood of the room to speak of his father’s passing in 1973.

“After my father passed away, her life would have been a whole heck of a lot different if it hadn’t been for Social Security and her Medicare. Remember, Medicare was a new program that started in 1965 and we are talking about this happening in 1973,” said Bauman.

“So I know firsthand in the same way that most other Americans do about how important those programs have been to lives of older Americans, how important it is for us to fight every single minute and work to elect leaders who will advance the quality of life for older Americans rather than going backwards in the way that Republicans in Congress have wanted to take us,” Bauman said.

“Grease is for peace!” proclaimed “Bowzer.”

“Wow,what a show…thank you,” said 70-year-old former State Senator Allen Kukovich as he clapped from the front row.

After Bauman finished speaking, over a dozen activists lined up to get an audience. As “Bowzer” signed autographs and talked to people, many in the crowd came up and embraced him.

As Bauman was wrapping up his impromptu autograph session, a man wearing a Canadian tuxedo — all denim apparel from head to toe — calling himself “Fast Eddie” from a local doo-wop band entered the dining room via the bar area and asked, “Is that Bowzer?”

When I said “yes,” he just couldn’t believe it.

The answer was simple: for Jon “Bowzer” Bauman, this is simply his kind of joint.

“I’ve played all kinds of big shows, but these events are more rewarding and more important than the arena rallies during campaigns,” said Bowzer as the crowd at Lilja’s Pizza milled around, everyone still waiting for a chance to talk with the aging but dedicated doo-wop star.

Donate So Payday Can Continue to Cover the #PA18 Election.

Be the first to comment on "With Seniors Breaking for Dems in #PA18, Bowzer of Sha Na Na Tours Pizza Parlors of Western PA Rallying Support"