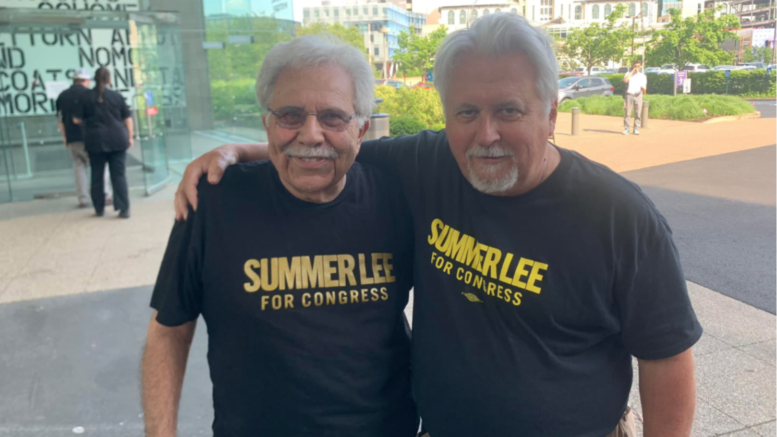 This is the second of a three-part series on “The New Class of Senior Citizen Activists,” underwritten with a grant from Social Security Works. Check out part 1 here and part 3 here.

It was primary election night in Pittsburgh last May, and my high school classmate, Summer Lee, was narrowly edging out opponent Steve Irwin (who had more than $4.5 million in backing from AIPAC and its corporate allies) in her bid to become Pennsylvania’s first Black Congresswoman. The atmosphere was tense. Summer had a narrow 40-vote lead, and her supporters were on edge as the results came in.

Summer Lee’s grandmother Marcella Lee-Wilson, a retired Verizon worker, was one of those nervously watching the results.

“In all of Summer’s other elections [for State Representative], the polls closed and Summer was declared the winner,” says Marcella. “I’m nervous.”

Suddenly, 71-year-old Wilmderding native John Serrapare steps up to the front of the sweltering room and begins singing “Power to the People,” the Vietnam-era anti-war anthem.

“Power to the people,” the crowd sang out in unison. People suddenly began to relax and enjoy the momentum as Summer narrowly took the lead in the nail-biting congressional primary.

Summer was fond of saying on the campaign stomp that the “power of the people was stronger than the people in power.” And as a mixed-age, mixed-race crowd sang the anti-Vietnam protest anthem by John Lennon, it seemed like the people in Pittsburgh might take back power.

As the crowd sang, it struck me how many older people who had protested the Vietnam War were present. While much attention has focused on how 34-year-old Summer Lee represents a new generation of activists, a large core of her supporters are from previous generations.

In Lee’s election night victory speech, she took pains to recognize the role of many older activists in her campaigns.

In the course of Braddock native’s two previous campaigns for state representative and her current campaign for Congress, few people knocked on more doors than 76-year-old filmmaker Tony Buba. Dubbed “The Bard of Braddock” by The New York Times, Buba estimates that he knocked on thousands of doors to support her.

“She does have a really strong base among older people. You know, older activists have been looking for someone like her for a generation to come along,” says Buba.

For decades, Summer’s home of Braddock and the Mon Valley has faced devastation due to industrialization and pollution. In 1950, Braddock had a population of 18,000. With a current population of only 1,800, it is one of the poorest communities in Pennsylvania.

Traditional Democratic politicians are calling for looser environmental regulations in the hopes that it will keep U.S. Steel and its few thousand jobs in the region. Meanwhile, the community has become unlivable, with some of the country’s highest asthma rates. On many days, the air in the Mon Valley ranks as the nation’s worst.

Ed Cloonan, a 75-year-old retired liquor store worker, says that Lee was the first candidate he had seen to talk about the Green New Deal and challenge the unregulated power of U.S. Steel.

“The biggest reason I can think of that I supported Summer is Eighth Avenue in Homestead, Braddock Avenue in Braddock, and Fifth Avenue in McKeesport, and Miller Avenue in Clairton, every one of those streets. You look at them today, they all look like they’re bombed out,” says Cloonan. “And they’ve been that way for 45 years, since I’ve been 30 years old.”

The elder socialist activist pauses and says, “You know why they call it the Steeler Nation? It’s because so many Pittsburghers left in the 1980s when the mills closed.”

“That’s why you can find a Steelers bar in any city in the world, because there was a diaspora of Pittsburghers all over the country looking for work in the 1980s,” says Cloonan.

“Politicians would come down to the Mon Valley and make empty promises. She is the first one to really speak for the people,” says Cloonan.

Before Summer Lee, he hadn’t been involved in a political campaign since Robert Kennedy in 1968.

Kipp Dawson, a 77-year-old retired teacher and union activist says that Summer Lee was the first candidate that she had volunteered for since Kennedy as well.

She said that in all her time knocking doors, she had never seen the kind of support that Summer Lee had. “In all the neighborhoods I went to, with a couple of exceptions, people recognized her as somebody who was really their representative.”

United Electrical Workers (UE) union activist Al Hart, who is 73 years old, says he likely talked to thousands of voters throughout the campaign for Summer Lee. He says his emblematic is symbolic of many senior citizens of his age, who got their start in the politics of the 1960s and 1970s before finding themselves frustrated for decades.

“For me, it’s like a lifetime of somewhat being in the political wilderness,” says Hart. “People of my generation, leftists of my generation, have waited 50 years for candidates like this. We never figured out how to do this. We ended up supporting liberals that were a little better than centrist Democrats, that were a little better than the centrist Republicans, for decades.”

Hart says it should be no surprise that senior citizens like himself, who live on fixed incomes, would back radical congressional candidates like Summer Lee.

“Senior citizens have as big a stake in radically changing socio-economic conditions as anybody does. If you’re too old to work, how the fuck are you going to live in this country?”

Hart says that many seniors don’t hear Democrats address their real needs and fall prey to the demagogues of outlets like Fox News.

“If you don’t address their needs, then they fall for ‘cultural issues’ that appeal to some sense of the good old days.”

Tony Buba agrees that Lee achieved breakthroughs because of her ability to address core issues without compromising.

“She’s never backed down from anything,” says Buba. “I think that’s why people are so afraid of her.”

“Mostly for people my age that have been involved in this stuff for a long time, it’s really time to step back out of any leadership roles. Just be there if anybody asks for advice, or if they don’t want your advice, just go out and work for them,” he says.

“In the first Summer campaign, I just used to go in and sweep up the office. I was just fascinated listening to all the young folks talk. They’re dealing with issues that I have no understanding of. So it’s really great for me to just sit there and listen and hear the conversations, and try to understand what they’ll be facing in the future, and what their fears are.”

Summer Lee got lots of seniors excited about politics again. Now they hope to expand their efforts to other parts of Pittsburgh.

“I guess what I would like to see is for us to be able to reach more people our own age,” Buba says, “and persuade them to get on board with folks like Summer.”

Donate to Help Us Cover Activists Organizing Across Generations