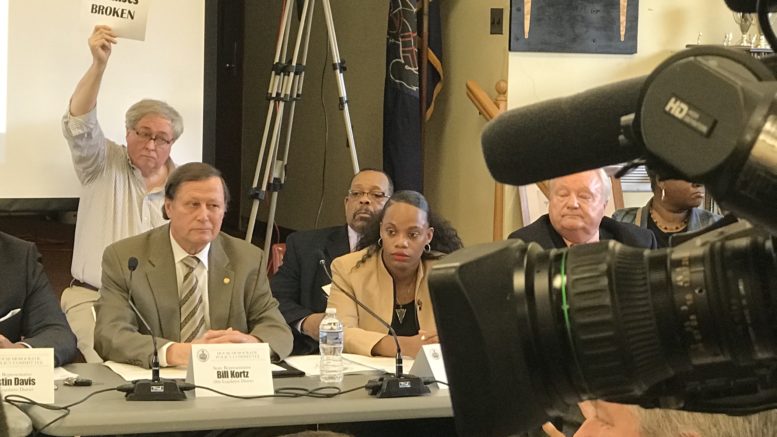 Steelworkers heckled Summer Lee, the first African American ever elected to State House in Western PA at a state legislative field hearing on the air quality crisis in Pittsburgh on Thursday February 7, 2018

Clairton is a bombed-out , 14 miles south of Pittsburgh, in the heart of the Monongahela River Valley, where steel was born. On this day, its tiny 1950s eras municipal building is quickly overwhelmed by coke workers in their coal-stained orange work outfits.

Strategically positioning themselves in front of local TV cameras, the orange brigade of coke oven workers practiced Steelworkers’ union chants while waving signs emboldened with the emblem of their union and the slogan, “Fighting for Good Jobs in Our Community.”

Despite an overflow crowd that ran out of the door, nearly 200 steelworkers were able to cram into the tiny hall for this field hearing of Joint Pennsylvania Senate and House Democratic Policy Committee hearing on toxic emissions from the plant where they work; forcing a line of workers out the door nearly 200 deep, making it nearly impossible for even many members of the media and even state officials to make their way to the front.

Since a fire at the plant on Christmas Eve destroyed critical emissions regulations equipment, unprecedented air quality alerts have left many Pittsburghers including myself struggling with respiratory conditions. Steel has faced massive public criticism over why they waited nearly two weeks after Christmas Eve till January 9th to finally inform elected officials of the full extent of the fire.

With Pittsburgh facing a clean air crisis, the orange Steelworkers brigade assembled to protests against calls for 2 of the plant’s 10 coke oven from being “hot idled” until they undergo necessary repairs as required by federal and state law.

For years, many community members felt that the largely white Steelworkers local union, whose members largely live outside of Clairton, have impeded progress needed to finally make Pittsburgh’s air safe by claiming attempts to crack down on U.S. Steel coke works in Clairton would result in job loss.

While the community of Clariton is 30% black, none of the 13 witnesses called to testify before the state legislative committee black.

“The plant should have been in hot idle. They should have been “hot idled” because they have been out of the exceedances in the Clean Air Act, says Melanie Meade, an African American Clairton resident holding a sign reading “No City is Liveable with Dirty Air,”.

For nearly 6 weeks, Pittsburgh has been paralyzed by an air safety crisis caused by the excessive emissions from the plant. Since January 1st, more than 25% of the days in the Pittsburgh region have deemed unsafe for people with asthma to go outside according to Environmental Health News.

On Sunday night, iPhones all over Pittsburgh began binging with pop notifications informing Pittsburghers that not only was it unsafe for asthmatics to go outside, but that it is unsafe for anyone to engage in outdoor exercise on a day when many hoped to take advantage of the unusual 60-degree winter day.

Air pollution monitors even showed that Pittsburgh’s air quality was worse than many large industrial cities in China.

Despite the panic that has spread throughout Pittsburgh, the Steelworkers with the assistance of US Steel have so far persuaded the vast majority of the region’s Democratic politicians to resist idling the plant.

US Steel has estimated that they wouldn’t be able to reinstall new emission regulation equipment until May and that any attempt to idle the battery would result in long-term job loss.  In the meantime, US Steel has proposed to continue operating the two malfunctioning coke batteries on reduced operations until the repairs can be made.

Despite promises from the company that they are paying for extra union labor to fix the problem, many activists remain skeptical given US Steel’s long history of deceiving regulators.

Since 2007, US Steel has violated 4 different consent decrees to clean up their act in order to continue operating. Federal regulators in 2016 even found that US Steel had purposely lied to inspectors and instructed employees to hide environmental regulation problems at the plant.

Earlier this year, the Pittsburgh-area Allegheny County Health Department fed up with using consent decrees, told US Steel that they had 6 months to either clean up their act or the county would consider using its authority under the Clean Air Act to “hot idle” the plant.

Some like Representative Summer Lee, the first African American woman to be elected to the State House from Western Pennsylvania, don’t want to 6 months to idle the plant, she says the time to do it is now.

“If a restaurant breaks Allegheny County Health Department (ACHD) rules, the restaurant gets shut down until the problem is fixed, but when a major polluter breaks ACHD air rules, the polluter gets to continue to make a profit while residents are told to stay indoors,” wrote State Representative Summer Lee from nearby Braddock on facebook in late January when the problems at the problem, where revealed to the public.

Among local elected Democratic officials from the industrial Mon Valley, where United Steel claims to still employ 4,000 workers, Summer Lee is the only one calling for the plant to be “hot idled.”

A former civil rights lawyer and Fight for $15 movement organizer, the 31-year-old DSA member defeated a 20-year white incumbent, Paul Costa, backed by the AFL-CIO. Despite having the backing of only one union in Pittsburgh, the progressive-minded, independent United Electrical Workers (UE) union and a scrappy of environmental, community and civil rights groups, Lee pulled off a stunning 34% over the labor-backed Costa in the heart of steelworker country: the Mon Valley.

(Full Disclosure: As kids, Summer and I studied and ran track together at nearby Woodland Hills High School, which was still under federal integration order when we attended in the early 2000s.  As a result of its proximity to US Steel’s nearby Edgar Thompson Steel Works, a nearly a third of the children raised in the district, including myself, have asthma).

With many of the Democratic machine politicians in the Mon Valley, owing their careers in large part to the support of the Steelworkers union and their allies in the AFL-CIO building trades unions, the bulk of the local Democratic officials have so far shied away from embracing calls to “hot idle” the plant while calling on the plant to improve.

“Simply put, if US Steel ends up idling batteries, our members will their jobs,” testified United Steelworkers Local 1557 President Dan Furko, who represents 1,200 members at the plant,. “This will begin a chain of events that will have a devastating impact on them, their families, and our communities across the Mon Valley.”

US Steel officials made sure to harmonize their talking points with the songbook of the Steelworkers.

Barshick warns the assembled Democratic state officials that without the Clairton steel works it would be impossible for them to support a network of over 4,000 U.S. Steel jobs throughout the Mon Valley. He also subtly reminds the audience that US Steel is one of the last remaining major corporations to be headquartered in Pittsburgh, where they were founded.

“Please understand that the men and women of U.S. Steel take great pride in producing, great steel products that are mined, melted, and made in America” concludes Brashick to a loud roar of claps, whistles and “Oorahs,” the Marine Corp’s battle cry.

After 30 seconds of clapping, an old middle aged yinzer stands up and shouts “STEEL CITY!!!!” as he looks around to his comrades to join in “STEEL CITY!!!”.

Just last September, the Steelworkers had voted to authorize a strike against U.S Steel.  But now old drama seemed forgotten as dozens of Steelworkers joined in the chants of “U-S STEEL!! U-S STEEL!!”

“That was odd that happened,” admits local Steelworkers Union President Don Furko. “But you know how it is: the power of suggestion, one person starts chanting something then everyone starts chanting it.”

To the many local African American residents, the chants by the overwhelming white steelworker’s brigade weren’t just odd, they were intimidating.

“So you have all these workers here, that don’t live in the community, and the community can’t come in and then look at these big burly guys, did you hear all the noise they made, but the community wasn’t invited and they were permitted to speak,” says Melanie Meade.

Twenty minutes after the crowd is revved up by the “US Steel” chants, Representative Summer Lee takes to the microphone to question an Allegheny County Health Department official on what would be the acceptable level at which they would step into to force US Steel to idle production that is causing harmful emissions.

“Right now, we don’t know if our kids can go out and play. So whether that number was lower than ten years ago we still can’t go outside”  exclaims the Howard Law School graduate to claps that are quickly drowned out by the sound of boos and heckles from a group of steelworkers in the back of the room.

As an African American woman attempts to tell the hecklers to leave, Summer Lee interrupts them to ask the heckler to come forward to speak.

“Let him speak. I am open” says an emotional Lee. The heckler declines to come forward to speak.

“I’m tired of being in intimidated and shamed for “threatening jobs” when we still can’t go outside!” tweeted Lee after the hearing.

While Lee and community activists were being drowned out by the chants of angry steelworkers, 230 miles to the South in Washington D.C., another DSA backed candidate, 29-year-old Congresswoman Alexandria Ocasio-Cortez (D-NY) and veteran Massachusettes Senator Edward Markey (D-MA), were introducing the Green New Deal.

The legislation mandates cleaning up environmental problems by providing guarantees of the job so that workers like those employed at the Clairton are pitted against community members, who want clean air.

The Green New Deal could finally bring to fruition, what Steelworkers union leader Tony Mazzocchi famously called the “just transition” process, where laid-off workers in dirty industries are promised more than job re-training but a good union job in a cleaner industry.

“Today is a big day for workers in Appalachia. Today is a good day for children who have been breathing dirty air in the Bronx,” said Ocasio-Cortez when introducing the Green New Deal yesterday.

Back in Pittsburgh,  though, the dream of a Green New Deal and a “just transition” are still distant ideas removed from the realities lives of many steelworkers.

“I got almost 1,200 members,” says United Steelworkers Local 1557 President Don Furko. “If we lose even one job to this fire that happened that wasn’t my members’ fault then that’s a tragedy in of itself.”

For many frustrated residents of Pittsburgh, the Steelworkers’ embrace of U.S. Steel is yet another reminder of how disjointed the labor movement can be from the communities in which their members are employed.

“It’s disheartening because they are dying as well,” says Clairton resident Melanie Meade. “They are suffering from the same illness that we are, but they have support. They have a union to support their families, but I don’t have one to support mine.”

This reporting funded by support from the Jewish Yinzer Fund for Immigrant and Racial Justice Labor Reporting, created to honor the 11 victims of the Tree of Life Synagogue Massacre.I