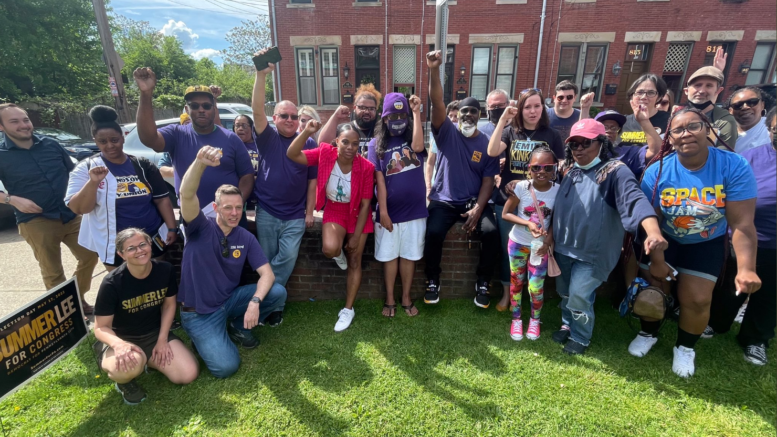 PITTSBURGH, PA –  Woodland Hills Class of 2005 alumni Ashley Comans is 9 months pregnant and expected to deliver her second child on election day, but this weekend the 34-year-old Black political activist was volunteering for Summer Lee, her former Woodland Hills classmate. At the same time, AIPAC was spending over $2 million in attack ads against Lee, feared by many in the white Western PA political establishment so, despite Comans being ready to give birth any day, Comans was determined to go door-to-door.

“How historic would that be! My baby’s born day is the day PA elects its first Black woman to Congress. This mama will never let him forget it,” Comans said before heading out in the 85-degree heat to knock on doors.

For a school that’s prided itself on its racial diversity, it’s been amazing to watch my high school classmates get excited for Lee, who they see continuing the multiracial vision of many alumni of the legendary school affectionately dubbed “Woody High.”

The consent decree, which created the school district in 1987, had unique measures that called for racial education, and for nearly 25 years the school was required to provide regular reports on racial equity measures to a federal judge. (Racial equity indexes, which Summer often notes in speeches, declined considerably after the consent decree was lifted in 2004).

Woody High promoted a sense of school pride in our multiracial student body, which was aided by a powerhouse football team that was ranked in the top ten in the country in the early 2000s. (As an autistic Jew, I’ve written at length about the role multicultural curriculum and Black educators played in teaching me to accept my differences and pushing me into journalism.)

When we were kids, Summer Lee was seen by myself and many others as a leader in the classroom, as a track and field athlete, and as the drum major of our marching band. Covering Summer for these past four years as an adult, it is amazing how many fellow alums I’ve seen working on Summer’s campaigns, people who knew her as a leader from her days in high school.

“We may have gone away, graduated, gone on with our lives, but the way that high school and our experience connected us, and Summer being the kind of candidate that we can get behind, is encouraging,” says Comans, who graduated in 2005. “We know that she is coming from a good space in her heart.”

After graduating from Woody High, Lee and Comans — who previously served on the Wilkinsburg school board — stayed in touch.

“She has a fire that everybody doesn’t have,” says Coman.

The mother of a 3-year-old daughter, Comans often has trouble getting her daughter to sit through political rallies like the one that Summer Lee threw with Senator Bernie Sanders and Mayor Ed Gainey last Thursday.

So this weekend, despite being expected to give birth on Tuesday, Coman was out knocking on doors for her old high school friend.

Comans wasn’t the only Woodland Hills alumni out knocking on doors in the heat this weekend.

Summer Lee was 32-year-old white activist David Greve’s drum major in the marching band. Since her first campaign for state representative in 2018 and now for Congress, Greve estimates that he has knocked on over 5,000 doors for Lee.

“All the time when I am going door-to-door, I tell people that she was my drum major in high school and it excites people,” says Greve. “She is really kind of a symbol now of the kind of revitalization of my generation getting back involved in local politics.”

Greve grew up in the affluent neighborhood of Edgewood, where many white parents didn’t send their kids to Woodland Hills, because of the false, negative stereotypes associated with it being such a heavily Black school.

“It’s great to see somebody from the school rise to such a position of prominence because, in the past, Woodland Hills is sort of looked down upon as a school with a great football team and that’s all there is to it,” says Greve. To see someone like Summer Lee on the cusp of being the first black woman elected to Congress from Pennsylvania, he says, “is quite amazing.”

Filmmaker Tony Buba was dubbed the “Bard of Braddock” by the New York Times. As a kid at Woodland Hills, I fondly remember when he would regularly come into school for assemblies to show films like “Struggles in Steel” about how the Steelworkers Union discriminated against Black workers. (Ironically, the Steelworkers Union is backing Lee’s white opponent Steve Irwin, a union-busting lawyer, due to Lee’s calls for a crackdown on pollution by US Steel. Several unions including the UE, the Teachers Union, UFCW, and SEIU are backing Lee).

Buba looks at Lee as yet another example of how multicultural education at Woodland Hills was a success despite the negative stereotypes.

“I mean, look at two young Black women in their thirties who graduated from Woodland Hills: Summer Lee and LaToya Ruby Frazier,” says Buba. “LaToya Ruby Frazier just won a MacArthur Genius grant and is considered one of the top photographers in the world. While Summer Lee is a national political figure, who is the most feared person by the political establishment in Western PA.”

Buba says that in many ways the trailblazing efforts of Lee are a continuation of the community activists who fought for the federal integration order that created Woodland Hills in the 1980s.

Another Woody High alum, 41-year-old United Electrical Workers (UE) Local 610 President Swanny Gibson, was the first union leader to back Summer when she ran for state rep in 2018. His union (UE) was the only one to back Lee  when she successfully ran for state representative against 20-year incumbent Paul Costa in 2018.

“She’s young. She’s inspiring and she’s exciting. I mean, just look how many people are here today,” Gibson says, pointing to the crowd of 500 that packed Lee’s rally last Thursday. “Just look at this energy. It’s the first time in decades that someone from the neighborhood has come and just lit a fire in people.”

As I watch the crowd chant “Summer Lee” at the rally, I find myself thinking of the first time that I heard people chant her name. She was a freshman on the track team when a crowd of my teammates began shouting “Summer Lee! Summer Lee!” as she competed in sprints.

A 14-year-old freshman at the time, she had this fierce look of determination, strength, and self-confidence that was unusual as she took sprinters years older than her. She was the kind of teammate who could give a real boost of confidence to other teammates with her shows of strength and grit.

Last Thursday after the rally, I watched as Summer took tough questions on whether environmental policies would destroy jobs. This was from a heavily white local press corps that has refused to cover her accusations of racism or even print that her opponent was a union buster. Still, I see that same look of determination on Summer’s face as she enters the final lap of a nationally watched congressional campaign.

“I feel tired. It’s been a long run, a long run. We have been out knocking on doors, talking to voters, and building community for the better part of a year now,” says my old teammate. “But it’s also exhilarating. And it’s also energizing because we get the opportunity to empower and to engage people who might otherwise have not participated in the process. And that’s what this is about.”

Donate to Help us Cover this Crucial Congressional Election