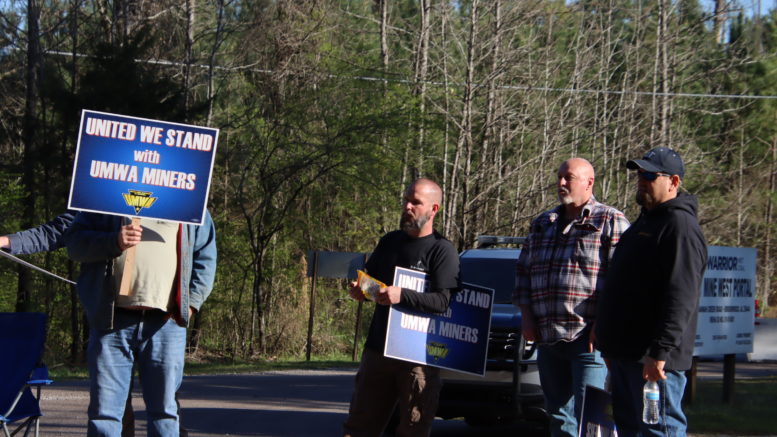 Greetings from the Burgh, where I have returned to Pittsburgh while the Amazon vote count continues. We couldn’t afford to keep three reporters on the ground any longer so I came back.

Fortunately, Alexander Richey, the first Bill Greider Grant grantee, lives in Birmingham and will stay on the ground to continue reporting.

It’ll take nearly two weeks to count the votes at Amazon, so, if you can, please donate today so we can keep paying Alexander to stay on the ground and report in Bessemer.

While the Amazon count carries on, we’re hoping to cover what looks like the closing days of the Warrior Met Coal Miners strike where more than 1,100 coal miners went on strike last Thursday night in the hills around Brookwood, Alabama.

Yesterday, the union announced they had reached a tentative agreement with Warrior Met Coal. However, the strike won’t end until the union has a full chance to debate and decide whether they will accept the deal. This process is expected to last until at least Friday.

“The decision to begin this strike rested with me,” said United Mine Workers of America President Cecil Roberts in a statement yesterday. “The decision to end the strike now rests with the membership of the union at Warrior Met. If they ratify this tentative agreement, the strike will end and they will have a new contract. If they do not ratify it, the strike will continue and we will seek further negotiations with the company.”

For more, check out AL.com.

With 1,300 Steelworkers Strike Raging in Pittsburgh, Conor Lamb Calls on Congress to Give COBRA to Striking Workers

Back here in Pittsburgh, a 1,300-person Steelworkers strike has been raging for nearly a week at ATI.

According to the union, both sides are still far apart in reaching a deal with ATI not improving on their last offer in late March, which led the union to strike.

The Steelworkers have had a bitter relationship with ATI (Allegheny Technologies Incorporated) as ATI locked out the Steelworkers union for six months back in 2016.

“The chief negotiators have had multiple conversations and discussions since the strike began, and for the ATI website to say otherwise is more than disingenuous,” said the union in a statement released online earlier this week. “During those discussions, management’s position has remained unchanged, and … management’s last response to the union was they would get back to us.”

Earlier this week, Congressman Conor Lamb went out on the picket line for the workers. He is now calling on Congress to pay for full COBRA coverage for striking workers because ATI has been cutting off the steelworkers’ health benefits. (Under the American Recovery Act, Congress pays the full amount of COBRA for any worker who loses their health care coverage.)

In a letter to Treasury Secretary Janet Yellen and Labor Secretary Marty Walsh, Lamb called on them to extend full COBRA benefits to striking workers as well.

“Those workers should not have their health care — for themselves and their families – put in jeopardy during a strike,” Lamb wrote. “The American Rescue Plan offers workers protections, and we need the Administration to ensure those protections are put in place immediately.”

For more on the strike, head to the Pittsburgh Tribune-Review.

Democratic Nashville Representative Jim Cooper is one of the most conservative Democrats in Congress and still routinely brags about how he is proud of voting against the bipartisan Americans with Disabilities Act.

However, he represents Nashville, a city that has grown tremendously and has become far more cosmopolitan and progressive since he was first elected to office in 1983.

Now, he faces a challenge from 39-year-old Black organizer Odessa Kelly of the labor-community group Stand Up Nashville, an organization whose efforts to win community benefits agreements, workplace improvements, and wage increases have been covered extensively by Payday Report since 2017.

Alex Sammons took a look at the American Prospect on what her election may mean:

Kelly also has a proven history of enacting meaningful change for working-class people in Nashville. When Major League Soccer picked Nashville in 2018 as its newest city to host a professional franchise, a decision that came with a $275 million contribution from the city to build the team a new stadium, Kelly’s organization Stand Up Nashville, a coalition of labor and community leaders, got the ownership group to sign a binding community benefits agreement, which set a new standard for equitable development in Nashville. As part of that commitment, Nashville Soccer Holdings agreed to directly hire stadium workers and pay them all at least $15.50 an hour with a targeted hiring program, dedicated 4,000 square feet of the development site to a child care facility, and pledged to set aside 20 percent of the housing units built on the development site as affordable and workforce housing, priced at 30 percent or less of the indexed household income. The arrangement was a “historic,” “first-of-its-kind” agreement for a government-led project, according to local news.

Stand Up Nashville was also active in fighting a proposed satellite headquarters for Amazon in Nashville, part of the company’s HQ2 sweepstakes. Amazon received $102 million in state and local economic-development subsidies to locate offices in Nashville for 5,000 workers, at the same time that the fast-growing city was crying so poor that it reneged on $38 million in promised cost-of-living increases for 9,300 city workers. A “Do Better” ordinance that Stand Up Nashville helped pass forces companies like Amazon to disclose information about worker wages and local hires, which the coalition is using to hold companies accountable to their promises.

Finally, Payday mourns the death of Washington Teachers’ Union President Elizabeth Davis who died in a car crash this week. Davis led her union during a time when Democrats in DC were attacking the teachers’ union and turned her union, which had been marked by corruption scandals, into a fighting force.

The Washington Post has a moving obituary for her:

Davis was a straight-talking and tireless old-school organizer who helped to revamp the beleaguered union when she took it over, imbuing it with a broad social-justice mandate.

Teachers frequently would get frustrated because Davis allowed everyone to speak at union meetings, making them drag into the late evening hours. She was known to give every teacher her cellphone number and told them to contact her with any issues they encountered, no matter how small.

But Davis said she believed democracy is at the core of any union and the Washington Teachers’ Union needed to have the backing of its members and public before it took any drastic measures such as a strike.

For more, read the full obituary at The Washington Post.

Please donate if you can so we can keep the union vote count at Amazon in Alabama.