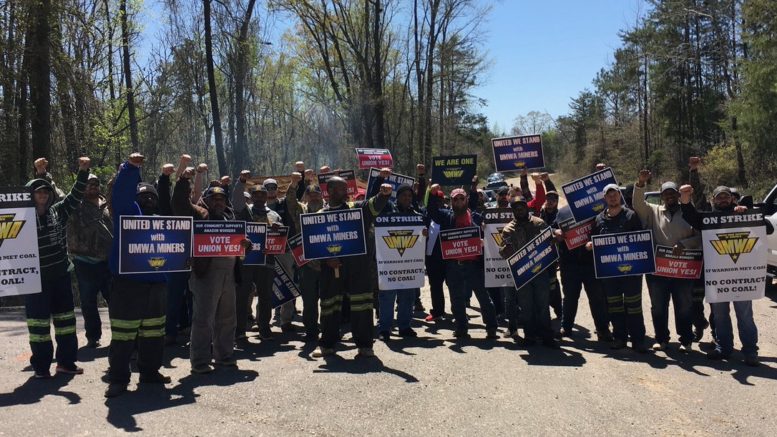 1,100 Coal Miners Go on Strike in Brookwood, Alabama (United Mine Workers of America)

BROOKWOOD, ALABAMA – “Look I ain’t been to sleep since yesterday,” said United Mine Workers of America District 20 Representative Larry Spencer as we arrived outside of UMWA Local Union Hall 2397 on Friday around noon.

Spencer wasn’t the only one who hadn’t gotten much sleep at the Union Hall. At midnight on Thursday, more than 1,100 coal miners went on strike at Warrior Met Coal in the hills of Brookwood, Alabama, 45-minutes outside of Tuscaloosa.

Many of those miners, particularly the “old-timers,” had been up all night getting picket signs, food, and coffee ready for picket line duty.

It was the first time UMWA coal miners went on strike at the gigantic mine complex in 40 years. For more than 100 years, the mineworkers union in Northern Alabama has been racially integrated and in this part of rural Alabama, nearly one-third of the workers in the coal mine is Black.

Workers both Black and White were excited about the strike — high-fiving, telling jokes, and taking turns working the grill.

Workers like Wright see the strike as a good opportunity to build on the traditions of Black and White coal miners, whose labor struggles have formed unique bonds of racial solidarity in the hills of Northern Alabama.

“It’s just a special bond, man,” says Wright. “When you talk to them, and they say, yeah, we’re part of the UMWA, that means something that’s big time. And you just automatically feel that connection. Because this is, like I said, a brotherhood.”

Five years ago, workers gave up concessions as Warrior Met went into bankruptcy. Now they are demanding a fair share as the metallurgic coal market has become more profitable.

Additionally, under bankruptcy, workers say management has become stricter, even penalizing workers for taking sick time off and forcing workers to work holidays.

Brookwood, Alabama is a community that knows struggle. In 2001, 13 miners were killed in an explosion at Jim Walter Resources Mine No. 5 just a few miles down the road from the union hall. Now, some miners fear that 20 later the lessons of that coal mine explosion have largely been forgotten.

“Well, I just see things that’s happening that scares me as far as can this happen again, you know, I see some unsafe things going on that people have taken for granted that happened back then,” says Spencer.

However, the union feels a new burst of energy from a younger generation of workers who are more open to unions and feel confident in this strike.

“A lot of the management team that they have at some of these mines treat you like a substandard person, you know, and, you know, these young guys are realizing, I don’t have to live like that, you know, I can I can do better than that,” says Spencer.

While workers an hour down there in Bessemer, Alabama are fighting for a union at Amazon, workers at Coal Met see a new resurgence of solidarity in the coal mines, particularly among younger workers.

“Some of them grew up in Union families. And, you know, times have changed so much that it’s hard to show as much solidarity and stuff,” says Spencer. “You can, you can go up here and ride down that road and look at the picket line, when you go back down there and run out there, you’ll see, you’ll see the solidarity.”

The workers say that they are prepared for a long fight to win back the power that the union once had in the hills of Alabama.

“I guess the exciting part of it is that you don’t really know what’s gonna happen,” says Wright. “We are here to make a statement, to let this company know that we mean business. And I think that they know we mean business now.”

Be the first to comment on "1,100 Coal Miners Go on Strike in Northern Alabama"