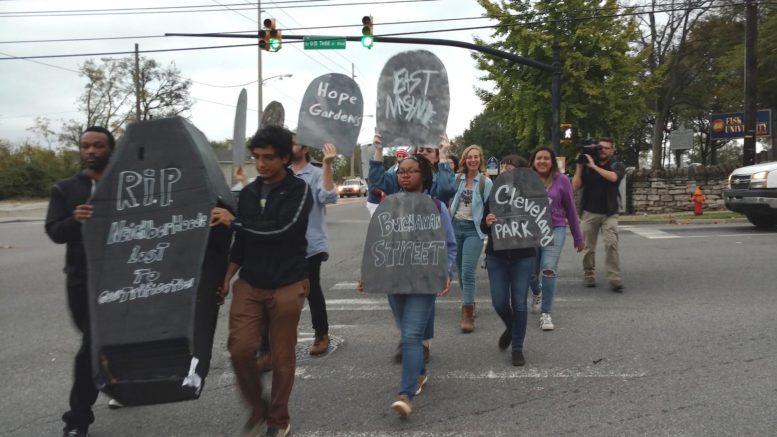 PATHE activists march in a funeral procession to mourn neighborhoods that would be lost to the Mayor's new $5.4 billion transit plan. (PATHE)

As Mayor of Nashville Megan Barry hopes to get community support for her $5.4 billion transit plan, she has decided to sign on to the “Do Better Bill,” which workers’ rights groups say would improve contracting in the city.

The move by the Mayor comes after Barry faced criticism for not doing enough on workplace rights from advocates in Nashville.

In May, Payday broke the story of how Sergio Gutierrez, a 31-year-old Guatemalan immigrant, was electrocuted to death while working on a construction site.

Then, this summer, two more Latino workers were killed on the job last summer.

Workers’ rights groups begin to criticize the Mayor’s office for not doing more to ensure safety standards on construction sites in the city.  Payday highlighted for a national audience how the Mayor’s office refused to speak about the death.

After facing criticism, protest, and negative press coverage all year, the Mayor finally decided this month to sign on to the “Do Better” bill, which would require a standardized report card judging a contractor’s workers’ rights record for Nashville Metro’s 40 city council members to use when voting on who should get a contract.

“We are asking that a report card be created and on that report card that they report certain things so we can decide as a city if that’s a good way to spend tax dollars, what are the wages, what are the kind of jobs being created,” said Odessa Kelly of Stand Up Nashville, a workers’ rights coalition that helped design the bill in conjunction with Nashville Metro City Councilman Anthony Davis.

Despite being one of America’s fastest-growing cities and having an unemployment rate of 3%, the city still retains a poverty rate of 17%, Kelly says that more must be done to ensure that city contracts don’t contribute to keeping workers impoverished.

“We have 3% unemployment but the poverty rate is staggering at 17%. Think about the math on that, how does it happen that you have a city with 3% unemployment but with a 17% poverty rate? It means you literally have a socioeconomic class of working people who are impoverished,” said Kelly. “When we talk to these people, we learn they work for public entities, they work for companies that have received a bunch of public money and get tax breaks from the city. This is why Stand Up Nashville wants more accountability and transparency.”

With many of Nashville’s 40 part-time Metro city council members having to work full-time day jobs and lacking time to investigate each proposed contract, the report cards would make it easier for city council members to reject contractors with poor workers’ rights histories. This makes workers’ rights advocates optimistic that the bill could improve conditions for workers in the city.

On Tuesday, the “Do Better Bill” passed Nashville Metro Council by a margin of 30-6 and will face a final vote by the council on January 2nd. The Mayor’s Office has said that if passed, the Mayor intends to sign the bill, which would give city council more power in deciding how contracts are awarded.

“Mayor Barry’s Office of Economic and Community Development has been pleased to work with Council Member Anthony Davis and Stand Up Nashville to develop BL2017-983 [“Do Better Bill’],” said Nashville Mayor Megan Barry’s spokesperson Sean Braisted in a statement to Payday Report.

“The public should have confidence that any incentives used to grow or attract companies to Nashville benefit the entire community,” Braisted. “This legislation will help to do that for future incentive agreements by promoting even greater transparency and gathering more data to inform the decision-making process.”

While workplace safety advocates are happy that Barry has signed on to the bill, they are concerned that she is still not doing enough to address the need for affordable housing and good jobs.

However, critics of the bill say that it does not do nearly enough to address their concerns that the transit line will be set up to primarily benefit high-income residents flocking to one of America’s fastest-growing cities.

They worry that instead of investing in existing bus lines that have seen service cuts, the plan would focus heavily on creating transit lines to wealthy communities while pricing out many of the working class families located along existing transit lines.

“While no one denies that our public transit system needs major expansion, we still have not been presented with a plan that addresses the most pressing crises facing our communities, mainly economically distressed neighborhoods and residents,” said the People’s Alliance for Transit, Housing, and Employment (PATHE), a coalition of labor, community and civil rights groups, in a statement issued after the Mayor announced her plan.

Nashville’s population has grown by 11.6 percent between 2010 and 2016, according to U.S. Census population estimates; this has led to massive increases in housing prices.

However, over 203,700 Nashvillians, nearly one-third of the city, are unable to afford the cost of housing in the city according to a report published by the Nashville Metro government.

According to the report, more than 44% of the city is cost-burdened; meaning that they spend more than 30% of their income on housing.

“The experience of other cities, including Denver and Atlanta, has shown that without explicit community benefits (or equivalent measures) legally written into or alongside major transit projects, there are unintended, devastating consequences for everyday people,” said PATHE.

Worse, the plan would create a new transit system and activists in the transit union worry that the jobs won’t be covered under the existing unionized transit system, but instead under a new separate non-union authority.

PATHE is demanding that the mayor revise her plan to include an enforceable community benefits agreement that includes $775 million to build 30,000 affordable housing units. The group also wants to see bus expansion into transit deserts and 24 hour bus service for late night workers as well as an agreement that the workers employed by the new rail line are represented by the Amalgamated Transit Union Local 1235.

Finally, the group wants to see that all workers are paid living wages and that they use apprenticeship programs that target youth from historically disadvantaged and marginalized communities in Nashville.

“She isn’t doing much for working class people who take transit for traditional reasons,” said Bobbie Negron of PATHE. “What she is doing is very good for only a small minority of people.”

Donate to Help Payday Continue to Nationalize the Fight for Workers’ Right in Nashville, the Most Dangerous City for Construction Workers in The South

Be the first to comment on "IMPACT: Following Outrage, Nashville Mayor Signs On To Workers’ Rights Bill"