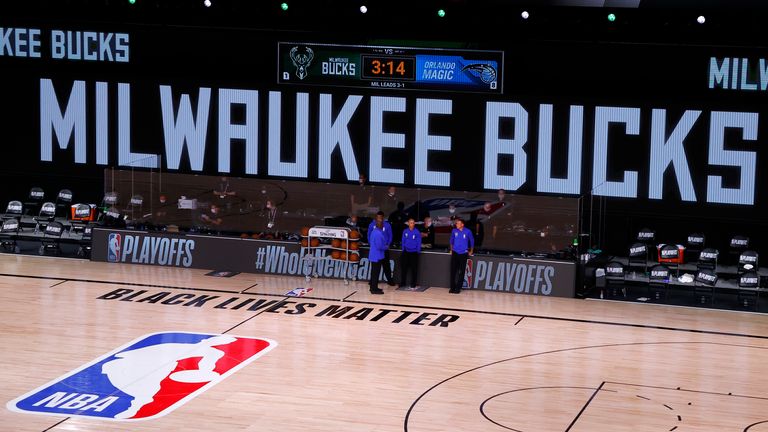 Greetings from the Burgh, where the City of Pittsburgh just granted Payday Report an alcohol permit for our 1st Annual Labor Day Picnic on Monday September 7th in Frick Park starting at noon.

Mark your calendars and donate to help us pay for the alcohol permit (not cheap) for our first Labor Day Picnic.

We have plenty of space, so don’t worry, we will be socially distancing and have folks with masks on.

Milwaukee Bucks Go on Wildcat Strike in Solidarity with Kenosha

The wildcat strike movement inspired by BLM protests (now at over 600 strikes since June 1 according to Payday Report’s Strike Tracker) appears to have spread to NBA basketball.

Despite tonight’s Game 5 of the NBA Playoffs being a potential series clincher, the Milwaukee Bucks are refusing to play out of solidarity with protestors in Kenosha. Their protests against the shooting of Jacob Blake have been met with repeated violence, including the murder of two protesters.

“We are tired of the killings and the injustice,” Bucks Guard George Hill told The Undefeated.

In response, the Portland Trailblazers, the Los Angeles Lakers, the Houston Rockets, and OKC Thunder have also announced they plan to join the strike. The strike could spread quickly as all NBA players are located in the same NBA bubble in Orlando, Florida.

The NBA has already announced they would be canceling all games tonight. It’s unclear how long the strike will last.

As Payday’s newsletter went to press, CBS Sports reported that the Milwaukee Brewers players had decided not to play their games against the Reds tonight in solidarity with the protesters.

“It’s a tremendous stand. …We have to bring light to this situation that we have, it’s a big thing,”

The strikes come as many teachers feel unsafe about returning to teach in classrooms across the US. Already, both major teachers’ unions, the AFT and NEA have pledged their financial support to support “safety strikes” over unsafe school reopenings.

Reduced school hours has meant dramatically reduced pay for bus drivers with drivers only being paid for 18 hours of work instead of the typical 30 hours they would receive.

Because the school also caps pay for bus drivers at $15 an hour, it has kept many bus drivers in poverty. The Dispatch has more:

The new schedule means there are fewer students on buses, which translates to faster routes, but drivers said they are being asked to perform other work that they weren’t required to perform prior to COVID-19.

“We spend a lot of time with sanitation,” Prince said. “A lot of us are also providing snacks for the children out of our own pocket. We are essential workers. We’re not asking for anything extra, just what we were told we were going to get.”

Spears said he had discussed calling a special meeting to address the situation, but after talking with Labat, he said the superintendent has the authority to address most of the issues without board approval.

“The only thing, really, that would require board action is pay adjustment,” he said. “That hasn’t been proposed.”

For more, check out The Dispatch.

Dunkin Workers in rural Western New York also went on a sickout over unsafe conditions. The Daily News has the story:

“We the Dunkin the crew have a few concerns that seem to go unnoticed from you. The mold in the store being a big (one), but also your refusal to supply us with masks, which is a New York State law, and the lock on the thermostat that causes the store to become so hot employees feel as though they may pass out,” the letter reads. “We feel until these issues are addressed we cannot continue to do our jobs to the best of our ability. You also give us a manager who is no help to us as a team. She spends most of her time in the back office and not coming up.”

Carol said the problems go back to the previous district manager, who said the store wouldn’t provide them masks because they were part of everyday life, and that employees would need to provide their own. The thermostats were locked, so on hot days temperatures could reach into the hundreds and the frosting on the donuts would start to melt.

For more check out, the Daily News.

If you have any stories or suggestions for our next newsletter, send an email to [email protected].