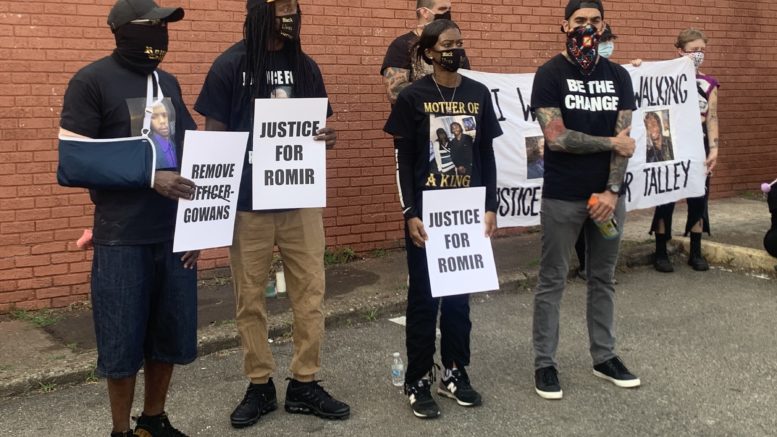 WILKINSBURG, PA – “Romir Talley was a freedom fighter, and he taught us how to fight,” sang a crowd of over 500 Black Lives Matters protestors at the march this past Saturday afternoon in the 15,000-person borough of Wilkinsburg right outside Pittsburgh’s city line.

For more than eight months, protesters like Saturday’s have been demanding answers from Wilkinsburg’s Black Mayor Marita Garrett into the fatal shooting of 24-year old father Romir Talley last December.

Like many of the inner city suburbs and boroughs that ring the outside of Pittsburgh, Wilkinsburg’s police force has been accused of poor oversight and lack of accountability. But despite having a city council and Mayor’s office controlled by Black politicians as well as a Black woman police chief, the borough still doesn’t require its police officers to wear body cameras.

Worse, Talley’s family says that police have rebuffed their efforts to uncover information about the shooting and details about the white officer who shot Talley. Eight months later, Officer Robert Gowans, who shot Talley, still remains on the force in Wilkinsburg.

“For Marita and [Wilkinsburg Police Chief Ophelia Coleman] to treat me like was I nothing pisses me off,” says Talley’s mother, Tasha Talley. “This is the same place that I have been living for years, paying taxes to the same damn officer that killed my son.”

When protestors even marched on WIlkinsburg Mayor Marita Garrett’s house, where she responded by visibly brandishing a gun while she confronted them.

“They don’t care about us,” says Black activist Rose Price. “These cops still remain, riding around here with no body or dash cams, we gotta get them out of here.”

For many activists, seeing a local municipality led by Black people and still failing to listen to protesters is more than frustrating.

“Here in Wilkinsburg, we see Black people more invested in the systems of white supremacy than in members of their own community,” says Jasiri X, a leader of 1Hood, a collective of artists and activists that have played a central role in helping to lead the protest movement in Pittsburgh.

“A lot of times, when we see people in office that look like us because we get a feeling— we get a beautiful feeling— that because we believe that those people in power will understand our conditions will understand our circumstances and speak for us,” says Jasiri. “But in this moment, the people in power in Wilkinsburg choose to protect this white officer before showing humanity to a Black family, and that cannot be excused.”

Black Lives Matter activists are vowing to take on officials in Wilkinsburg, who have angered family and community members over their inaction over the killing of Romir Talley.

“Whether you resign today or get voted out of office tomorrow, we are gonna be going because that cannot be excused – not today, “says Jasiri. “We are choosing sides today, and if you are on the side of white supremacy, no matter what color you are, your side is out of here.”

In Wilkinsburg, the pain of this inaction by Black elected leadership in Wilkinsburg runs deep.

Tasha Talley, the mother of Romir Talley, embraces her orphaned grandson as tears run down her face as she speaks to the crowd of 500 at the rally in Wilkinsburg. “My baby here, he asks for his dad all the time, but he told me, “You know what Grandma, I’m gonna be strong and I’m gonna take care of you, and my mom and my other grandmother cause my daddy always told me to look after everybody.”

Tash paused as tears break on the faces of herself and many in the crowd. “I’m sorry y’all this is so hard,” says Tash as other family members come to hug her.

Donate to Help Us Cover the Fightback Against Racial Injustice

Be the first to comment on "After Black Mayor Pulls Gun on BLM Protesters, 500 Show Up to Fight Back"