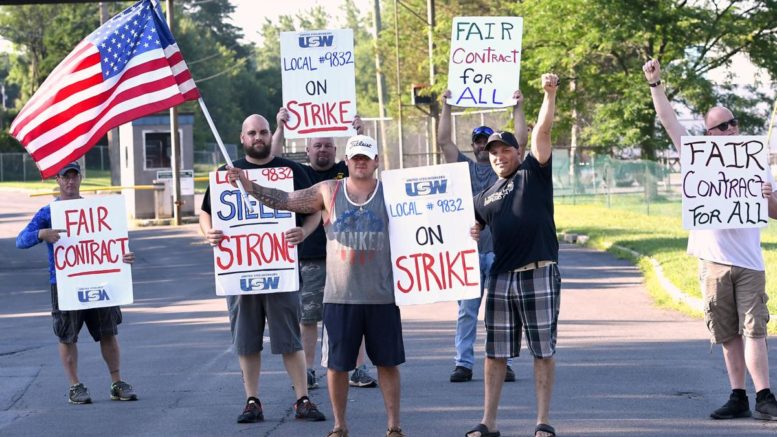 Greetings from the Burgh, where we’re nearing our end-of-the-month fundraising push.

Every month, we ask subscribers like you to help us meet our monthly budget of approximately $6,000.

We’re three days away from the end of the month, and we are only $1,130 short of meeting our $6,000 goal. If you can, join the hundreds of monthly recurring donors and become a recurring donor. Thank you.

Donate today to help us cover our monthly costs and take home a decent salary.

Earlier this month, the American Federation of Teachers President told Payday Report in an exclusive interview that her union was prepared to strike, if necessary, to prevent unsafe school openings.

Now, the American Federation of Teacher’s 45-member Executive Council has passed a resolution offering the international union’s support in backing strikes nationwide this fall over safety.

“Let’s be clear,” Weingarten told the 4,000 AFT delegates assembled virtually online. “Just as we have done with our healthcare workers, we will fight on all fronts for the safety of our students and their educators. But if the authorities don’t get it right, and they don’t protect the safety and health of those we represent and those we serve, nothing is off the table-not advocacy or protests, negotiations, grievances or lawsuits, or, if necessary as a last resort, safety strikes.”

For the full AFT Resolution, head to AFT.org.

With childcare workers now being deemed essential workers during COVID, many are hoping this will create momentum to organize and improve working conditions for underpaid childcare workers.

This week, in what is one of the largest union victories for workers in decades, over 45,000 childcare workers in California opted to unionize with AFSCME and SEIU.

Roughly 43,000 childcare providers will now be able to negotiate with the state over a contract that could impact the funding and training they receive for their work. The election was the result of a 17-year campaign waged by public-sector unions to pass state legislation allowing these workers to bargain collectively.

The workers, who provide child care to low- and middle-income families generally in home-based businesses, get subsidies from the state. They are not technically government employees, but Gov. Gavin Newsom (D) signed a law last September granting them the right to bargain with the state over their reimbursement rates and other working conditions.

After the union vote tally was announced Monday, Miren Algorri, a child care provider in Chula Vista, noted in an online press conference that the win had taken close to two decades. Many child care providers joined the Zoom call from their in-home classrooms.

“This feels surreal,” said Algorri, who is licensed to care for up to 14 children in her house. “But we prevailed because that’s what we child care providers do. We work tirelessly, we don’t give up … and we do it because we care.”

For more, head to HuffPost.

Starting at 11:59 p.m. Saturday, workers at Xylem Pump Factory who are members of United Steelworkers Local 9832, went on strike.

The 175 workers in Auburn, New York say they are upset over the company’s attempt to cut retiree healthcare in the midst of a pandemic. Younger workers are also angered, citing the need for better retirement benefits for workers like themselves who are on a two-tier retirement system.

The company has refused to meet to bargain with the union again until August 11, signaling that they may attempt to force the union on a long strike in order to win concessions.

However, the union says it’s prepared to stay out for as long as it takes.

“We are prepared to be out here seven days a week, 24 hours a day,” local union president Shawn Jakaub told the Auburn Citizen. “You’ve got to stand up for yourself.”

To read the full story, head to Auburn Citizen.

The latest Senate COVID relief does not include measures to protect workers from COVID relief. The National Employment Law Project blasts the bills many anti-worker provisions in a statement:

In addition to abandoning unemployed workers, Senate Republicans have also laid bare their plans to abandon workers in essential and in-person-reopening jobs by granting long-term legal immunity to irresponsible employers who fail to protect the health and safety of workers and consumers. Such legal immunity would be a disincentive for employers to protect their workers, exacerbating a situation in which workplace safety standards are already insufficient, given OSHA’s refusal to issue an emergency standard and the lack of retaliation protections for whistleblowers and workers organizing for safer conditions.

The Senate Republicans’ bill also contains a dangerous corporate giveaway for so-called “gig companies” that would restrict their workers from fighting for their rights as employees. Under the proposal, if a “digital marketplace company” such as Uber or DoorDash provides financial assistance to their workers, or provides certain health and safety benefits or training to their workers (such as First aid at work, basic safety measures, etc.) , such actions could not be used to find that the company’s workers are employees. This provision has no place in a COVID relief bill, or anywhere.

For more, go to the National Employment Law Project.

Be the first to comment on "AFT Votes to Back Safety Strikes – Steelworkers Strike in NY – 45,000 Childcare Workers Unionize"