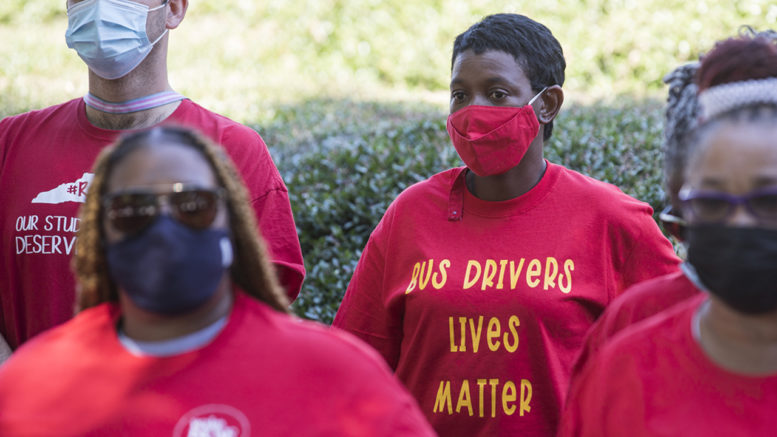 School bus drivers in Raleigh strike in 2022 (The News & Observer)

Greetings from the Burgh, where it’s been an exciting day as I just got my booster COVID at a vaccine clinic sponsored by Casa San Jose Latino Immigrant Resource Center.

Elsewhere, workers in Pittsburgh are on the march as the strike wave rolls on.

GetGo Workers Walk Off Job in Elite Suburb of Pittsburgh

In Moon Township, an elite South Hills suburb of Pittsburgh, workers have walked off the job at a GetGo convenience store.

Recently GetGo, a gas station convenience store chain owned by the Giant Eagle supermarket company, posted advertisements throughout the Pittsburgh region that they were paying $15 an hour.

However, increased wages haven’t been enough to help the chain keep all of its workers happy.

GetGo workers posted a sign on the door, saying that their treatment caused the walkout.

“Closed because the people of Moon Township treat our employees horribly [and] ran off our staff,” read the sign the workers left behind.

For more, check out the thread on Reddit, where the image was shared.

We are preparing to cover a big strike of hundreds of healthcare workers at UPMC in Pittsburgh on Thursday. Workers are tired of the treatment by UPMC, the mega-hospital chain that is the largest employer in the state of Pennsylvania.

“The way they treat us is absolutely dehumanizing after so many of us risked our lives to work at UPMC through the pandemic,” said 28-year-old Khalil Brown, a food service worker at UPMC, who makes $15.50 an hour. “It got so bad that I had to go to a mental health crisis center because I was having so many anxiety attacks at work.”

Payday will be out in the streets of Pittsburgh, covering the strike on Thursday. We hope to get enough money to bring in a videographer.

Donate today to help us cover the strike on Thursday.

Also, please consider signing up as one of our 631 recurring donors today.

School cafeteria workers in North Carolina’s Wake County are on strike today in over 30 school districts.

In North Carolina, public employees are banned from engaging in collective bargaining. However, the strike wave has grown even in North Carolina, a state with the lowest percentage of union workers in the country.

Earlier this month, school bus drivers in Raleigh-based Wake County went on a 3-day sickout strike and won $1,250 bonuses, a small 1% wage increase, and a promise of improved working conditions.

The strikes come as the Wake County school board considers additional bonuses of $3,750 to each school district employee and other wage increases.

However, the North Carolina Association of Educators (NCAE) says the one-time wage bonuses aren’t enough. They want the school district to set a minimum wage of $17 an hour for all school support staff.

“We appreciate Wake County Schools’ attention to the staffing crisis and their acknowledgment that they have more resources available than they suggested on Nov. 2,” said Kristin Beller, president of Wake NCAE, in a statement released last week. “But WCPSS continues to sit on millions of federal dollars that could be put to use today, providing long-awaited raises and compensation for the extra work created by staffing shortages. Our kids can’t wait any longer.”

Read more at The News & Observer.

Following the deaths of 6 workers, Georgia Company Sanctioned for Destroying Evidence of Malfeasance

Following the death of six workers in an accident at Messer Gas last January, Messer Gas has been sanctioned for destroying evidence.

The Atlanta-Journal Constitution has the story:

The victims’ families sued Messer Gas, which manufactures industrial freezer units for meatpacking, alleging the company could have prevented the Jan. 28 disaster involving one of its machines. Nitrogen — which is frigid and can displace oxygen from the air around it — overflowed from one of the units, court records show.

A Messer employee threw away a machine part that should’ve been preserved for testing, the judge said, calling the trashed Evidence critical to the plaintiffs’ case. State County Judge Emily Brantley also faulted Messer for concealing the incident, saying the company’s conduct threatened the victims’ families’ ability to have a fair trial.

“It would be a disservice to our system of justice for these families to believe that their opportunity for a fair trial in these cases was compromised by Defendant Messer’s abuse of the discovery process,” Brantley wrote in her Friday order. “The conduct of Defendant Messer demonstrated throughout the discovery process is shockingly unacceptable and at best is grossly negligent.”

The sanctions include the judge’s intention to explain to the jury at any eventual trials that Messer destroyed Evidence of manufacturer error that would’ve have hurt Messer’s case and that Messer then lied about it.

For more, check out the Atlanta-Journal Constitution.

Alright, folks, that’s all for today. Donate to help us cover the UPMC strike this week in Pittsburgh.

Be the first to comment on "NC School Worker Strike Wave Spreads – After Getting $15 an Hour, Pittsburgh Workers Still Walk Out – Kellogg Looks to Hire Scabs"