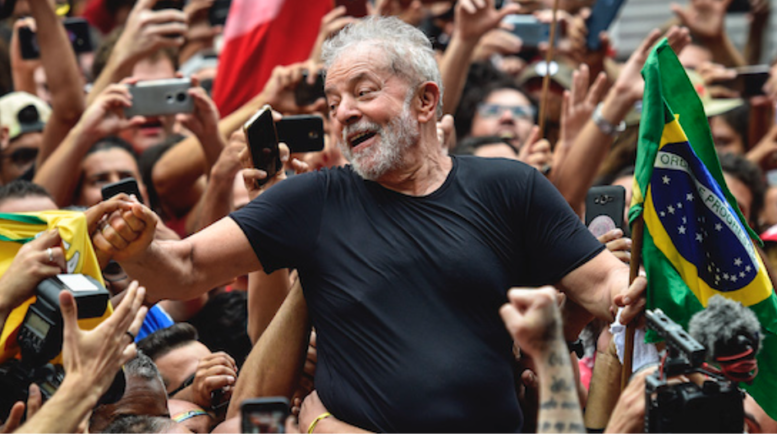 Already, warning signs have shown that supporters of Bolsonaro, a former Army captain who rose to prominence in the 1980s by calling for the re-establishment of the military dictatorship, will once again attempt a coup in Brasil if Lula wins.

“If need be, we will go to war,” Bolsnaro said in a recent speech.

If Bolsonaro wins,  many fear that the streets of Brasil will erupt with mass violence as paramilitary gangs that support Bolsonaro has begun to mobilize. More than 2,000 Bolsonaro fan clubs have started gun clubs that many on the left say closely mirror paramilitary groups.

A coup in the largest democracy in Latin America could set a very negative precedent for democracies worldwide.

The entire globe will be negatively affected as Bolsonaro has pledged to dramatically expand development in the Amazon, which is being destroyed under his watch at an alarming rate.

Thanks to our generous readers’ donations, I am proud to say we have raised enough money for a round-trip plane ticket so I can cover this election in Brasil.

I am traveling down to Rio de Janeiro for a six-week stay in Brasil to cover the election . But, the more Payday raises, the more Brazilian workers we can interview, and the more places we can go to report on this critical election. Most importantly, we can hire local journalists to help us understand some of the stories that we may be missing.

Donate to help us cover this crucial election in Brasil.

If Bolsonaro attempts to ignore the election results, American union activists will play a crucial role in pushing the Biden administration to pressure Brasil to respect the election results. That’s why it’s so important that American trade union activists have a trusted labor reporter on the ground who speaks Portuguese and who helps foster communication between the two movements.

As a journalism student, I spent two years studying in Brasil and still speak the language pretty fluently. I have maintained contact with trade unionists throughout Brasil. My old Brazilian host family from when I lived there 15 years ago has even agreed to host me for part of the journey.

I went to college for nearly two years in Rio de Janeiro during Lula’s re-election campaign for president in 2006. I know the city well, and I’m sure there will be lots of exciting stories in Rio de Janeiro, but we hope to raise enough money to get outside Brasil’s second biggest city and into the far less well-known parts of Brasil.

Donations will also go toward hiring local Brazilian freelance journalists to film and help guide us around during certain parts of the trip. They’ll also be crucial for traveling the country to visit Brazilian trade unionists, along with paying for places to stay and eat.

Additionally, every cent helps pay the salaries of Payday’s staff, including those who will keep a regular newsletter covering the U.S. running while I am overseas.

For American trade unionists, it’s necessary to focus on what’s happening in Brasil. Lula got his start in politics as a local autoworkers’ union president in the interior of São Paulo. He coordinated a series of bold country-wide strikes in the 1980s that helped bring down the dictatorship.

To rally international support against the dictatorship, Lula built close ties with the American labor movement and received funding from the UAW, which counts the former Brazilian president as an honorary member of the UAW.

For decades, Brazilian workers have come to the U.S. to show solidarity with American workers organizing at multinationals. This group includes the Brazilian Renault Nissan workers that Payday covered in Canton, Mississippi, in 2017, who had been traveling to Mississippi for more than a decade to help workers organize there.

My plan is to be in Brasil from late September until early November, covering the first round of the presidential election on October 2 and then the likely second round of the runoff on October 28. If I can, I’ll stay until November, possibly longer if we raise enough money.

With your donations, I hope to travel extensively so I can talk to as many Brazilian workers as possible. With major news outlets cutting their foreign desks, it’s crucial that Payday and its readers continue to fund our efforts to cover the election in Brasil.

Donate today to support our travel to these places.

Brasil is a huge country, and very diverse — there are many places I hope to visit, such as Curitiba, where Bolsonaro is popular and is home to the Brazilian Nissan Renault auto workers that I got to know when they traveled to the U.S. five years ago to show their solidarity with Nissan workers in Mississippi trying to unionize.

I hope to go up to the Northeast of Brasil to João Pessoa and travel with some long-time friends that are Catholic worker activists. If we can raise enough money to travel there, I hope to spend time with the Landless Workers Movement.

By squatting on unused arable land, the Landless Workers Movement has used legal provisions from the 1988 Brazilian constitution to gain land ownership rights for more than 370,000 families on a combined 7.5 million acres of land. They have over 900 occupations underway in Brasil right now and have faced brutal violent attacks from Bolsonaro’s paramilitary gangs.

There are so many inspiring stories like this one to tell in Brasil.

Several readers and activists have already contacted me, offering to help arrange trips throughout Brasil. It’s just a question of finding the money to travel around and hire local journalists to help me out when I get there.

With our reader support, I am certain Payday will make a big impact with our coverage of Brazilian workers fighting for democracy in this election. I am sure there will be much Brasil that will inspire you too as readers.

Payday has shown a consistent ability to impact the conversation about workers organizing. Last year, The Washington Post cited our work tracking strikes in a front-page cover story. The New York Times described us as a publication with “new energy.” PBS American Portrait profiled our work tracking the strike wave, and Esquire described our work as “invaluable.”

Donate today to help us report on this pivotal election this October. Or, if you can, please sign up as one of our 721 recurring donors.