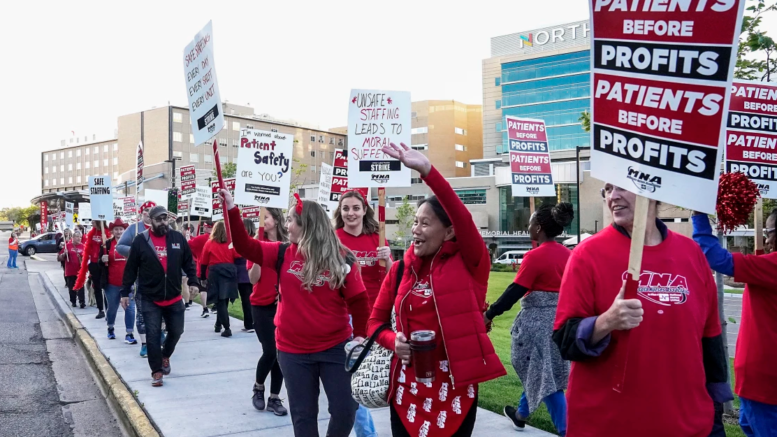 Greetings from the Burgh, where we are tracking a very exciting strike wave.

Strike Tracker Sees August Strikes Doubling Since July
For the past month, we have seen a steady uptick in strikes. After analyzing the data from Payday Report’s Strike Tracker, we have found that strikes more than doubled in August compared to July.

In July, Payday Report’s Strike Tracker counted 50 walkouts across the country. This August, we counted 106 walkouts. And, already this September, we have seen large strikes emerging.

Fifteen-thousand nurses are striking in Minnesota today, along with the more than 7,000 teachers currently on strike in Seattle. This strike follows the nearly 5,000 teachers who struck in Columbus in late August.

As with past strike waves, when workers get high-profile attention for large strikes like these, it often inspires more people to head out to the picket line and strike.

Help Us Continue to Track the Strike Wave

Like previous waves, the mainstream media is once again ignoring this uptick in strikes. However, as a result of Payday Report’s Strike Tracker, we know the signs of a significant strike wave are on the horizon.

If you can, donate to help us continue to track this upcoming strike wave.

Or, please, sign up as one of our 721 recurring donors today.

In Minnesota, more than 15,000 nurses have continued their 3-day strike at 13 different hospitals, saying they are fed up with chronic understaffing, low pay, and poor treatment from management.

According to the Minnesota Nurse Association, this strike is the largest private-sector healthcare strike in the history of the U.S., as the hospitals are owned by different chains in the Twin Cities and Duluth.

“I can’t give my patients the care they deserve,” Chris Rubesch, the vice president of the Minnesota Nurses Association and a nurse at Essentia Health in Duluth, told The Washington Post. “Call lights go unanswered. Patients should only be waiting for a few seconds or minutes if they’ve soiled themselves or their oxygen came unplugged or they need to go to the bathroom, but that can take 10 minutes or more. Those are things that can’t wait.

For more on the strike, check out the Minnesota Reformer.

90,000 Rail Workers Could Strike on Friday

On Friday, more than 90,000 rail workers could go on strike nationwide as the federally imposed “cooling off” period is set to expire on September 16, giving workers legal to strike.

While some unions have settled for a 21% wage increase over five years, other union members remain upset that the proposed contract does not address workplace issues, including shifts that can sometimes last up to 14 to 16 hours, as well as the industry push to have only one-person crews manning large freight trains.

It appears that rail management is also preparing for the possibility of a strike. On Friday, the nation’s largest rail companies began informing shipping companies that they would not be loading certain types of shipments for rail transportation as they prepared for a strike.

Under the Railway Labor Act, Congress can stop any rail strike by voting to impose a contract unilaterally on workers who haven’t accepted them. (This last was done in 1980).

House Majority Leader Steny Hoyer (D-MD) told Bloomberg today that if the rail union strikes, that Congress would act to stop it.

Union leaders feel that the decision to stop shipping a certain type of freight was designed to pressure lawmakers to quickly settle any strike of the nation’s railroads.

“The railroads are using shippers, consumers, and the supply chain of our nation as pawns in an effort to get our Unions to cave into their contract demands knowing that our members would never accept them,” said the union leaders in a joint statement issued on Sunday. “Our Unions will not cave into these scare tactics, and Congress must not cave into what can only be described as corporate terrorism.”

For the latest on the strike, check out Reuters.

In Moreno Valley, California, the independent Amazon Labor Union (ALU), which won a historic union election at Amazon on Staten Island, has decided to launch a union drive at Moreno Valley. With elections underway at facilities in Albany, New York, and Campbellsville, Kentucky, the drive in Moreno Valley is yet another sign of the fledgling union’s national ambitions.

While the workers, who had formed an informal advocacy group during the pandemic called United 4 Change ONT8, were courted by several larger unions, including the Teamsters, they ultimately decided to go with the independent, upstart Amazon Labor Union.

“[ALU] felt us, they felt our pain,” Nannette Plascencia told the LA Times. “Only people who work in [Amazon] are gonna know how it really is and what you really need to do. You gotta think outside the box with Amazon ‘cause they’re a different breed. You can’t be conventional with them.”

For more on the drive, check out the LA Times.

Alright folks, that’s it for today. Donate to help us keep tracking this emerging strike wave.  And please, if you can, sign up as one of our 721 recurring donors today.

Be the first to comment on "Strikes Doubled in the Last Month – 15,000 Minnesota Nurses Strike – 90,000 Rail Workers Could Strike on Friday "