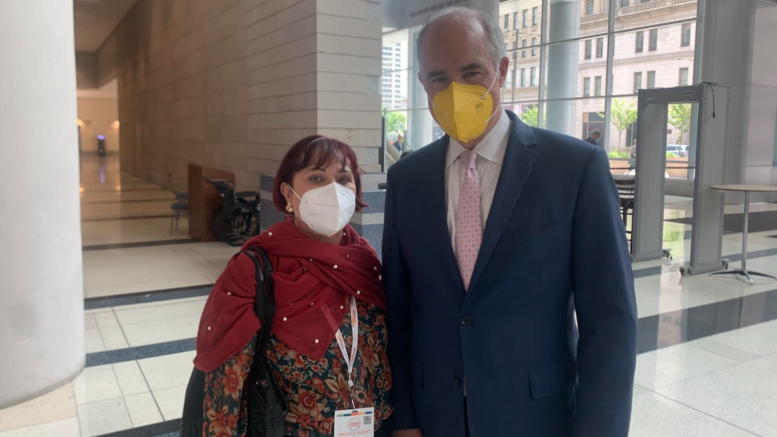 Earlier this month, a delegation of Brazilian trade unionists traveled to the AFL-CIO Convention to exchange ideas. This happened at a crucial time in the country’s democracy. This October, Brazil will undergo one of the most important elections against the nation’s fascist-leaning president Jair Bolsonaro and former president and trade union leader Luiz Inácio Lula da Silva.

In the 1980s, while Lula was leading strikes to topple the dictatorship, Bolsonaro was an army captain blowing up government buildings in Rio de Janeiro to intimidate pro-democracy activists. Violence is likely to reappear, as it’s expected that Bolsonaro will attempt to steal this election.

While Lula is leading by 20% in the polls, there are already indications that Bolsonaro may follow the example of Trump and try to strongarm his way into retaining the presidency. This week, he announced that Braga Netto, a retired army general, will serve as his running mate. This is a sign that Bolsonaro is trying to foster close relations with the military.

“They are going to try to steal the election,” says Miguel Torres, the president of Força Sindical, a trade union federation. “There is so much fake news on Facebook and elsewhere. Fake news and elsewhere is a global problem.”

For Brazilian workers, getting rid of Bolsonaro is a life-or-death struggle.

“In this moment that we are living, we have a government that hates the trade union movement,” says Trajano dos Santos. “This is the worst moment in the history for Brazilian workers with a fascist government.”

International solidarity has always been important for the Brazilian trade union movement. In the 1980s, as Lula and other unions lead strikes in Brazil against the dictatorship, the Brazilian trade union movement built extensive solidarity abroad. Groups like the UAW sent staff and financial support to bolster union and pro-democracy movements in Brazil.

“Lula is a citizen who doesn’t just think of Brazil, but of the world as whole,” says Trajano dos Santos. “He has always had a deep vision of global social movements.”

In addition to rallying solidarity for Brazilian trade unionists ahead of the upcoming elections, they were also meeting with trade unionists to gain support and learn lessons from them.

Amazon has a large presence in Brasil, and it is expanding. The recent victory by the Amazon Labor Union on Staten Island has excited many Brasilian trade unionists.

“We watched what happened with Amazon here in the U.S. and it inspired us in our organizing,” says Trajano dos Santos. “The only problem is that with the current government, we don’t have a chance to organize workers.”

At the same time, Brazilian trade unionists have also inspired many American trade union movements. In the years leading up to the 2017 union election at Nissan in Canton, Mississippi, unionists arrived from Brazil to help American workers in the UAW’s organizing efforts.

(Watch: Payday’s Interview with Brazilian Workers During the Nissan Union Drive in 2017)

While workers in Mississippi had struggled for decades to unionize at Nissan, all of the company’s plants in Brazil were already unionized. Not only did they attend protests, but Brazilian trade unionists also went door-to-door with workers in Mississippi, attempting to build support for the union at Nissan.

However, Brasilians fear that this could change if Bolsonaro was re-elected again. With American companies like Amazon and Uber moving to Brazil, they are looking for ways to implement the worst aspects of American labor law in the country.

“We are seeing labor law diminishing in Brazil because of these platforms,” says Miguel Torres. “In Brazil, we have big movements against these platforms. We have people working 12-14 hours a day for these platforms and they’re barely making minimum wage, with no protections if they get hurt on the job, no days off. There’s no health insurance. There is nothing.”

For Brazilian trade unionists, everything is at stake in this election and solidarity between workers in a global economy is crucial.

“We need Lula to win,” says Trajano dos Santos. “He knows workers  like no one else because he knows workers he was a metal work. He never lost the sense of what it meant to be a worker and look out for the most vulnerable”.

Interviews conducted in Portuguese and translated by Mike Elk

Donate to send me back to Brazil as an election observer