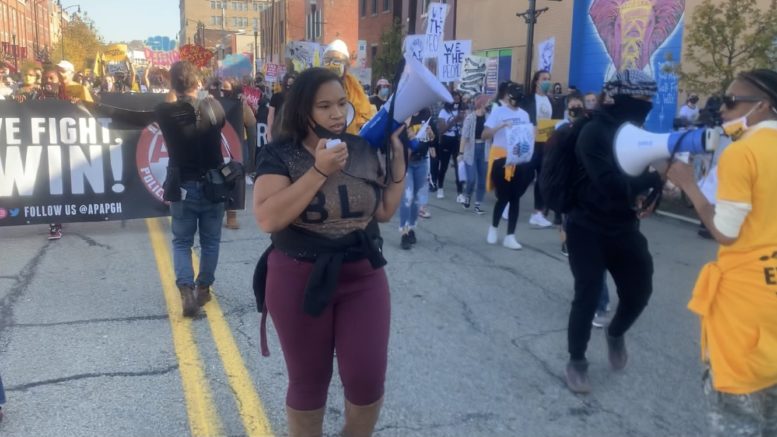 PITTSBURGH,PA – The rally demanding every vote be counted was scheduled to start at 1 p.m. on Saturday in Pittsburgh’s South Side. Instead, Black Lives Matter activists and the Alliance of Police Accountability quickly changed the theme of their protest.

At 11:24 a.m., NBC News announced that a batch of 29,000 ballots from Pittsburgh’s Allegheny County had put Joseph Biden above the margin needed for victory, and the pre-planned rally quickly turned into a victory parade of nearly 1,000 dancing down Pittsburgh’s 2-mile long strip of bars known as East Carson Street.

“Movements are born because of the work of Black folks,” announced Summer Lee, the first Black woman ever elected to the State House from Western PA.

She was standing on the back of a trailer next to a DJ as the crowd cheered in unison with Lee, a socialist State Representative with a history of celebrating the work of activists and artists.

The crowd responded in unison: “We win.”

After Lee and others spoke, marchers set off down East Carson Street behind the banner reading, “We Defend Our Democracy with Solidarity.” With them was a procession of bright multi-color paper mâché floats celebrating “Black Joy” and calling for a revolution, while a DJ on a trailer pumped up the crowd.

Earlier in the week on Election Day, I had covered Black artist Jacquea Mae singing Marvin Gaye’s “What’s Going On” outside of a polling place in the housing projects of Northview Heights. Today, she was getting the dance party going to Apache among a multi-racial crowd of activists.

“Oh my god, I am so thankful,” Mae said of her relief on the victory results. “We still have work to do, but today, we need to celebrate this kind of joy. It’s special because of our collective effort, we banded together, and we made it happen.”

For Black women like Mae, the victory in Pennsylvania was a clear sign of their power as a voting force in American politics.

“This is what we do,” she said. “Black women save the world, we change the world. Black women are amazing, we are superheroes.”

East Carson Street is known as a very popular hangout spot for white residents of Pittsburgh, but for many of the cities’ black residents, it’s a place to be feared.

“Damon Young likes to joke that East Carson Street is where the Steelers get beat up by the cops,” IHood Media Founder Jasiri X told me as we marched down the street and white bar-goers greeted the Black Lives Matters activists with applause.

Nearby, 63-year-old Baldwin resident, Chris Kuznicki, had been eating lunch with her husband, a Trump voter and retired union boilermaker, outside of the patio of the Double Wide Grill.

“I can’t believe my husband took me here today and then this happened,” she said, holding her fist in the air to show her solidarity with the marchers. “He’s a big fossil fuel person and voted for Trump. I am just thrilled.”

Postman Marc Mancini stood nearby in a shirt that read “Eat the Rich” and celebrated the victory.

“I can’t tell you how insane things were at the Postal Service with all the tension and all the mail,” said Mancini. “We were carrying a ton of ballots and political mailing. Just a ton, it was crazy.”

Down the street, Guillermo Perez, steelworkers organizer and president of the Labor Council for Latin American Advancement, led a crowd of 30 blue-clad Steelworkers shouting: “When we fight, we win!”

“This is a great day for immigrant workers in Pittsburgh today,” said Perez. “Anytime you defeat a fascist it opens up all kinds of possibilities for workers…This opens up a lot of space for organizing.”

While many celebrated the victory, many also cautioned there was work to be done in pushing Biden to the left. But today, activists celebrated and hoped to build on momentums for future reforms.

“This is a day that we can all rejoice, thank god for the good weather,” Lee said, noting the 70-degree early November day. “Take your time to rejoice, take your time to celebrate because there are so many lives that were on the line with this fight right here, but also take time to remember all the people, who didn’t make this far, every kid, who languished in a cage, every loved one, every family member that we lost because of COVID-19.”

East Carson Street was flooded with activists, many who hoped that the joy they felt would be contagious and power them to future victories.

“Revolutionary joy is what we got,” Mae said. “It reminds you of why you are doing what we are doing.”

She then led a crowd to start dancing to the song, “Apache” as Pittsburghers rejoiced in the defeat of Trumpism.

Be the first to comment on "1,000 Dance Down Pittsburgh’s East Carson to Celebrate Defeat of Trumpism"