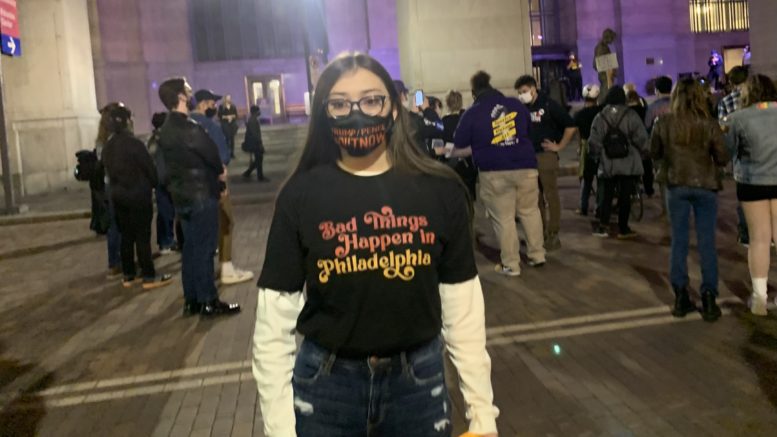 PITTSBURGH, PA — “Cancel our rent, evict the president instead,” chanted roughly 400 protestors as they marched through the streets of downtown Pittsburgh yesterday demanding that every vote be counted.

The protests came on the heels of the Trump campaign suing Pennsylvania to stop counting the votes. But protestors took to the streets demanding the opposite.

As of Thursday afternoon, approximately 326,000 mail-in ballots are still uncounted in Pennsylvania, Trump is leading by 90,000 votes, and the mail-in ballots are breaking for Democrats by a more than 2 to1 margin for Biden. The remaining ballots appear to be heavily concentrated in the Democratic stronghold of Pittsburgh and Philadelphia. (Ballots are expected to continue arriving and will be valid as long as they are received by the U.S. mail by Friday at 5 p.m.)

Madeline Fortos, a 16-year-old Mexican-American Penn Trafford high school student, traveled 45 minutes from Westmoreland County to the protest. Her high school is quite conservative as her county voted for Trump by more than 60%. For the young activist, the atmosphere of the protest was a welcome relief, she said.

“Protesting is a great way to get involved cause I can’t vote yet,” said Fortos as she handed out flyers promoting future actions. “I am sick of Trump’s fascism. He has used violence against peaceful protesters, he has locked my people in cages on the border. I am sick of the direction that this country is taking; our climate is dying. We don’t have a future without a climate.”

Nearby, 22-year-old Black Pitt student, Claude Corbett, was revving up the crowd as the march started to embark onto Grant Street.

“5, 6, 7, 8! Social justice can’t wait,” shouted Corbett into a megaphone adorned with the bumper sticker of the group “Socialist Alternative.”

While Claude said he was a critic of Biden, he said he thought it was vital to take Trump out of office to create space for anti-capitalist and anti-racist organizing.

“With the little bit of democracy that we do have, I think that we have to defend it with all of our might,” he said.

Some activists attending the March said that protests like this could help prepare for more dramatic actions.

So far, at least 7 unions and 3 local AFL-CIOs representing over 600,000 union members have issued a call for a General Strike if Trump tries to steal the election.

“We can’t just go to our members and say go out on strike, that won’t work,” United Electrical Workers Secretary Treasurer Andrew Dinkelaker said, marching down Grant Street and waving a red UE flag. “We have to show our members, the support that is out there in the community, and that people will have their backs if they go out on strike.”

Dinkelaker said that mobilizing and preparing for a General Strike now could help unions in their fight to push Biden to be more progressive.

While activists called for the votes to be counted, many also issued their criticism of Biden and called for people to be prepared to push Biden from the left.

When Obama was elected in 2008, many activists were thrilled that the Bush era was over. However, many later were disappointed and failed to mobilize in large numbers to push Obama to be bolder.

This time around, activists aren’t being so naive about what the election of a Democratic President means.

“There is a lot of work to be done,” Claude said marching downtown, but he added that he was hopeful this could be the beginning of a change in the country.