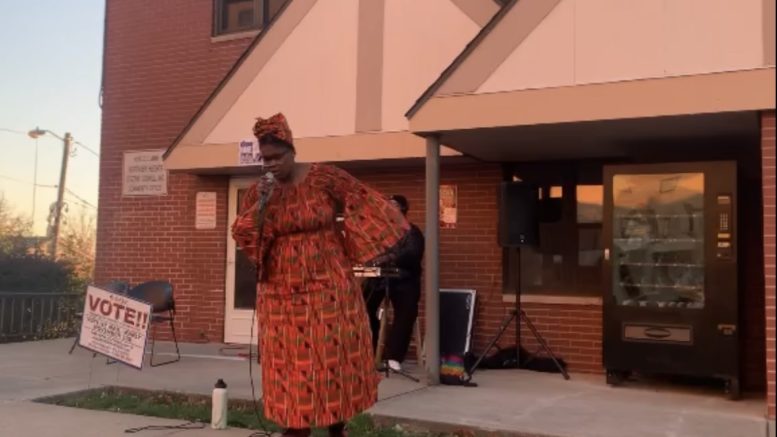 PITTSBURGH, PA – On the afternoon of the election, Siraji Hassan was standing outside of the voting precinct in the Northview Heights housing projects, urging his fellow Somali refugees to vote for Joe Biden.

“I am tired of this bullcrap,” he said as a Black woman in hijab strode past him to vote.

As the executive director of the United Somali Bantu of Greater Pittsburgh, the “bullcrap” was all of the anti-immigrant rhetoric he has faced since Trump was elected into office.

“Since Trump has been elected, people have been voicing all kinds of racism and showing their true colors,” said Hassan. “We wanna change that because that’s not the America that I knew when I first came in 2004.”

For most of the day, Hassan decided to stand outside of the Northview Heights polling place, helping many Somali refugees, who had been in the U.S. for more than a decade, vote in their first election as American citizens.

Voting in only his second election as a U.S. citizen, Hassan was jubilant describing how he felt voting out Trump.

“It feels so good, I feel like I got the power to make a change, every vote counts,” he said.

Outside of the voting booths at Northview Heights, the mood was electric as DJs blasted hip hop tracks and a dozen people began dancing on the sidewalk as a food truck  handed out free tacos to neighborhood residents.

“Today is for the ancestors,” said community activist and artist, Jacquea Mae as she took the mic to sing Marvin Gaye’s “What’s Going On?”

For Mae, it was important to be there today for her Black community.

“I wanted to bring joy, especially Black joy,” she said. “We have so much stuff to be angry about COVID-19, this and that, people are dying. It just seems like it never ends.”

Mae said she was excited about voting for Biden after four years of Trump. However, she added that she was not naive about the work that many activists like herself will face if Biden and Harris prevail in the polls.

“This is the beginning of a long road, things won’t change for us unless we do the work,” she said. “We are the leaders that we are looking for cuz nobody can be us, nobody can stand up, the way we can.”

While Mae knows there may be disappointments ahead in a future Biden administration, she said she’s prepared to do what it takes to work for justice and equality.

“Very often, at times, we forget that this road that we are on was not started by us, it was started by the elders and ancestors, who challenged that we were more than three-fifths human and had the right to vote like everybody else,” she said. “We forget about that all the time, but now we don’t have any choice, we have to pay tribute and honor the elders.”

As the sunset on Election Day over Northview Heights, Jacquea Mae was already looking forward to the fight head.

“This is just a small-mini step,” she said. “We got more work to do, I am gonna be working till I die, you know what I am saying?”