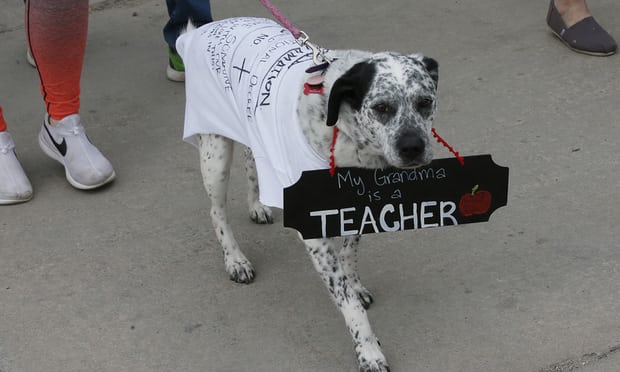 From the windswept plains outside of Chandler, Oklahoma, Payday Senior Labor Reporter Mike Elk has a dispatch for the Guardian on the bonds between women being formed on the grueling march:

“I have bled on half of these women,” said Madeline Jacobsen, a third-grade teacher at Bell elementary. “Our feet are gross and you can’t reach them at the end of the day so someone literally has to help you wrap them and get your feet good.”

Many had never attempted anything so intense as a 110-mile march, in this case from Tulsa to the state capitol in Oklahoma City. But they were inspired to make a statement about the need to fund education properly.

“I planned to walk five miles each day because I didn’t think I could do it all,” Jacobsen said. “I have walked every single mile because I can do more with this group and this support than I can ever do alone.”

The marchers are mostly women, and they have formed a tight bond. Every night, they have dinner together and go over “pluses” and “deltas” of the day. Deltas are obstacles they would like to overcome. There is give and take. The women talk through issues and figure out solutions to make everyone feel included.

“Men wouldn’t be able to do things like this,” said 52-year-old Radonn Broeffle Musgrove, a 31-year teaching veteran. “Women are able to work these sort of things out.”