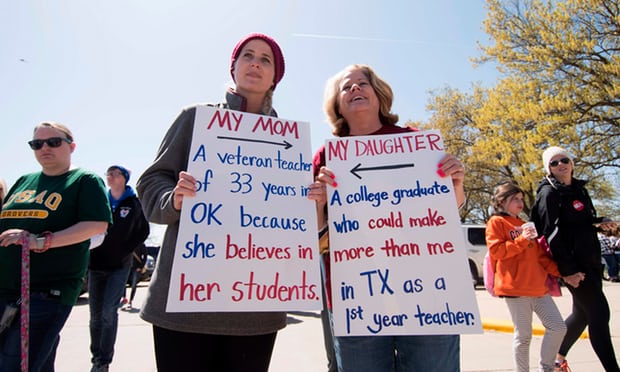 “Today the legislature started to hear us,” the OEA said in a statement. “The passage of clean versions of the ‘ball and dice’ legislation, HB 3375, and the Amazon tax bill, HB 1019, were vital to Oklahoma students. Because of the educators, parents and students who have taken to the Capitol this past week, the new funding for Oklahoma’s students nearly doubled.”

However, the OEA also criticized the repeal of a recently passed $47m hotel and motel tax, which had been slated to boost education funding, as a sign of bad-faith bargaining by Republican leadership.

“We call on Governor [Mary] Fallin to immediately veto [the repeal] because it steals $42m in funding away from Oklahoma’s students,” the OEA said.

The teachers vowed not to end their strike until the state passed senate bill 1086, which would close a loophole in the state’s capital gains tax and raise an estimated $100m for classroom resources. The Oklahoma GOP has so far refused to consider raising the capital gains tax.

Be the first to comment on "BREAKING: Okla. Passes More School Bills, But Teachers Vow To Continue Strike"