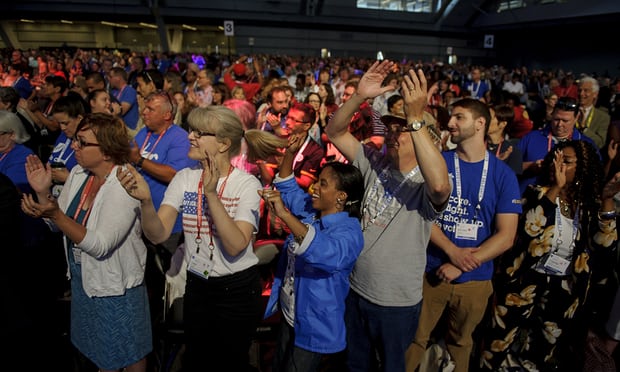 Audience reacts to former secretary of state Hillary Clinton during her speech at the convention of the American Federation of Teachers on Friday, in Pittsburgh, Pennsylvania. Photograph: Jeff Swensen/Getty Images

Writing for the Guardian, Payday Senior Labor Reporter Mike Elk filed a dispatch on the new energy in teachers’ unions:

“We are all militant again, we will all go to jail if we have to,” said Robert Russo, a teacher union leader from New Jersey who served 15 days in jail in 1970 for his role in an illegal teachers strike. “They are taking away rights, they are taking away everything we have worked for years and people are very invigorated.”

Despite school being out for the summer, teachers around the country aren’t taking a break. They are mobilizing support for more teachers strikes in states across the country including in Louisiana, where a survey of 3,800 teachers in May performed by the union showed that 61% of teachers supported a strike.

“Some of our local presidents were calling and saying they saw what was happening in West Virginia and Oklahoma and that they had been hearing in their locals that there were teachers and school employees seeing these strikes and becoming inspired,” says Larry Carter, president of the Louisiana Federation of Teachers.

Be the first to comment on "‘We’re militant again’: teachers at union convention galvanized by wave of strikes"