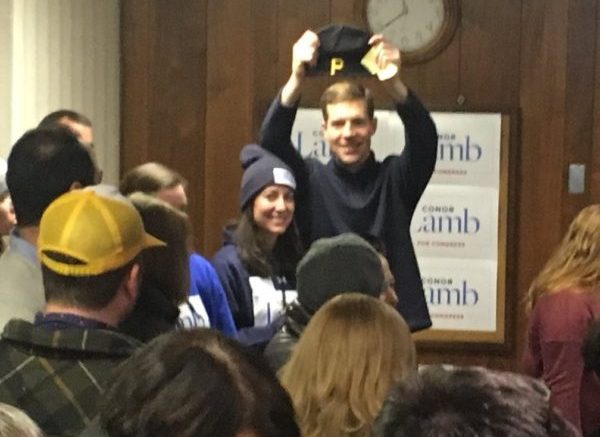 Conor Lamb holding up a Pittsburgh Pirates hat in a challenge to Chicago Cubs Owner Joe Ricketts, who is spending $1 million in dark money in the #Pa18 Special Election

GREENSBURG, PA – This past Saturday, when temperatures outside were a mere 5 degrees, it was nearly impossible to get into Conor Lamb’s newly-opened office that will be used for the PA-18 special election.

The crowd at the wood-paneled downtown headquarters was packed in like sardines, boasting over 70 activists of all ages. Finally, after gently pushing my way through the crowd, I was able to make my way into a side room where I ran into my grandfather’s old political ally, former State Senator Allen Kukovich.

“This office has been used by the Democratic Party, including during the Obama campaigns, and there has never been turnout like this,” said Kukovich.  “For early January, in zero degree weather, the enthusiasm is just incredible.”

The Democratic Party of Westmoreland County was once a mighty force.

Two years after my birth, in 1988, the county voted for Michael Dukakis 55-44 percent, in a year in which he won only eight states. In the last election, the county went for Trump 63-32—and this despite the county still maintaining a voter registration margin of 100,000 more Democrats than Republicans. (See Payday’s 7,000-word long-form on the decline of the Democratic Party in Westmoreland County).

However, Democrats in the district are bullish about their chances of rebuilding the party. Since Trump took office last year, they have increased the number of local Democratic committee members from 300 members to 400 and for the first time in decades are holding meetings in 8 out of 9 districts in Westmoreland County.

A win for Democrats in the district could give Westmoreland County Democrats the boost of confidence they need to take their rebuilding efforts even further.

“It could re-energize the party, that’s for sure,” said Ernie DiMartino, a local party activist.  Within the last year, the energy level of the party has risen quite a bit. What’s exciting about this is that you see the foot soldiers stepping forward to help Conor and they are excited and that’s gonna help”.

Westmoreland County Democratic Party Chair Lorraine Petrosky said the thing that really impressed her is how many young people have begun getting involved in local organizing with the special election. In the process, they have fired up older activists.

“They are the people who have the stamina to help knock doors during the frigid weather and inclement weather because that’s what the next couple weeks are gonna be,” said Petrosky.

It will be an uphill race, but the 33-year-old former Marine Corps prosecutor is bullish on his chances.

“We stand in the middle of a congressional district that was drawn by Republicans to make it impossible for us to win. They used a computer program called RedMap to accomplish that,” Lamb told the assembled crowd of activists packing the headquarters. “Yet in spite of all that, we all know that that this race already is a dead heat before we have had any TV commercials or many people in this district have even gotten to know me.”

Lamb took aim at the dark money flooding into the district — money intended to decrease the sense of momentum on the Democratic side in this pivotal Western PA special election that will likely draw international attention.

Last week, Speaker Paul Ryan’s Super PAC, the Congressional Leadership Fund (CLF), announced that they plan to open two campaign offices in the district. However, unlike the volunteers who were knocking doors, Ryan’s Super PAC intends to hire over 50 paid, full-time canvassers to go door-to-door.

In a bellwether Georgia special election last year, the CLF raised more than $7 million dollars to knock on over 300,000 doors.

“It doesn’t surprise me that the other side is relying on outside money because our opponent already said from day one that his agenda was someone’s else agenda. It wasn’t the agenda,” said Lamb. “So, therefore, the owner of the Chicago Cubs [Joe Ricketts] is the one paying for his first TV commercials.”

In a jab at Ricketts — who owns the Cubs through a family trust — Lamb held up a Pittsburgh Pirates cap and implored the crowd to join him in zero degree weather to knock on doors.

“Yes it’s cold, yes it’s going to be an uphill fight for the next 9 weeks, but I think everyone in this room knows that we can do it,” said Lamb to the sound of raucous cheers.

“We have all that we need in this room to win this race,” Lamb told the crowd at Democratic Party headquarters. “You had it already today when you walked in the door. It’s in the hearts and minds of our people, and that’s something that the people with dark money on their side will never be able to catch up to.”