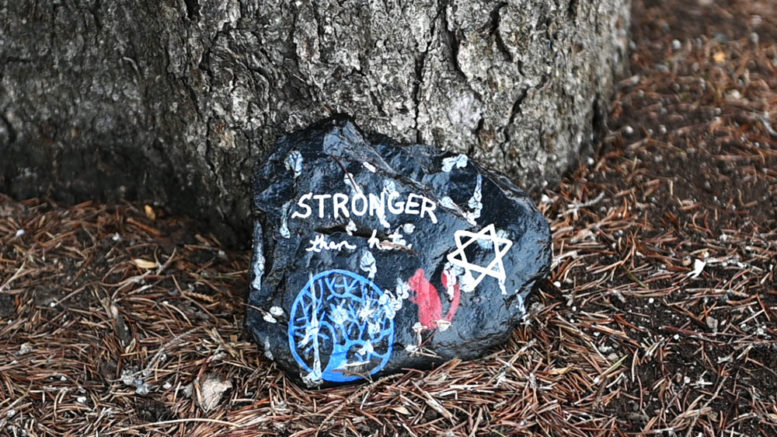 A memorial stone outside of Tree of Life Synagogue (Zach D. Roberts)

PITTSBURGH, PA – Today, marks the 2nd anniversary of the Tree of Life synagogue massacre when 11 Jews were killed for their support of the Hebrew Immigrant Aid Society.

To mark the commemoration of the shooting, we at Payday Report have produced with Zach D. Roberts, a 25-minute documentary: “The Unlearned Lessons of the Tree of Life Massacre.”

Two years ago today, I arrived at the synagogue shortly after the shooting had stopped and SWAT Teams were still securing the building. What was most impressive to me was that people in the streets of Squirrel Hill had already begun talking about using this moment to fight even harder for immigrants.

Shortly afterwards, I ran into Mike Smalls, who was rushing up to the police station to drop off pizzas for the officers who had just braved an hour and a half gun battle to retake the synagogue. Driving with Smalls in his utility van, he told me, “We gotta make this moment about how to organize people.”

In the ensuing weeks, dozens of rallies called for solidarity, and the cry “Stronger Than Hate” became a slogan affixed to bumper stickers, T-shirts, and banners all around Pittsburgh.

However, two years later, many Pittsburgh activists say the pledge of becoming “Stronger Than Hate” in the wake of the massacre hasn’t come true.

Jasiri X is the CEO and co-founder of 1Hood Media in Oakland, an organization that since 2006 has used art and multimedia to educate Pittsburgh’s Black youth about social issues and fighting violence in their communities. 1Hood has been at the forefront of many of the major protests in Pittsburgh.

“To us, it always felt like ‘Stronger than Hate’ doesn’t include me,” said X. “Really from the start, it was like, oh, that doesn’t include Black people in Pittsburgh, because that has never been our experience. Our experience has been one of racism, oppression, hate. To us, it was always just a slogan and it was not real in terms of how we live.”

While labor leaders like Allegheny County Labor Council President Darrin Kelley went around and gave speeches calling on people to be “Stronger than Hate” in the wake of Tree of Life, many unions in Pittsburgh continued to engage in the same old racist and anti-immigrant practices.

Construction unions in Pittsburgh worked with Republicans and some Democrats to successfully pass a statewide E-Verify Bill in 2019 that made it tougher for immigrant construction workers to get jobs.

In the aftermath of the Tree of Life shooting, Monica Ruiz of Casa San Jose, an organization working to protect the rights of immigrants and refugees, said that many groups simply weren’t willing to be allies in the fight.

“There is a lot of hard work that a lot of people aren’t willing to do and until we are willing to do that, we aren’t going to change anything,” said Ruiz.

Many unions in Pittsburgh also spent hundreds of thousands of dollars in an attempt to defeat Representative Summer Lee, a former labor organizer and the first Black woman elected to the State House from Western PA, due to her opposition to fracking and call for a crackdown on chronic pollution. (Lee defeated the unions to win re-election with 77% of the vote).

“In advocacy, there needs to be more inclusion in terms of what liberation looks like across all spectrums,” said County Councilwoman, Liv Bennet.

Many worry that even if Joe Biden were elected that white supremacy acts of terrorism could still happen because of the failure of many to fully address racial justice issues.

“I think it’s gonna happen again and I don’t think Pittsburgh is prepared for it,” said acclaimed Pittsburgh Jewish writer, Jacob Bachrach. “I think if we continue to think that if we hold tight, the election goes our way, if things kinda settle down then we can have some slight reversion to normal after November; after January then some of this will dissipate, but I think that underlying causes remain”.

To look into these questions, our documentary questions how the growing energy for the Black Lives Matter movement creates an opening in Pittsburgh to address many of the racial justice issues that weren’t addressed following the massacre at the Tree of Life synagogue.

We interviewed some of the biggest movers and shakers in Pittsburgh, including Emily Kinkead, a 33-year-old woman who led a muti-racial coalition to defeat a Democratic State Representative who voted for E-Verify. We also spoke with longtime Black KDKA radio host Chris Moore who for decades has tried to shake up the media system in Pittsburgh. Retired UE News Editor Peter Gilmore also speaks about how unions have fallen into the trap of dividing workers by race in Western PA.

Our documentary “Unlearned Lessons of the Tree of Life Massacre” is our most ambitious project to date at Payday Report and one that holds a special meaning for me as Jew who grew up near the synagogue. There are few things more important to me than honoring our Jewish martyrs who gave their lives for showing solidarity with immigrants.

Our documentary asks tough questions and we hope you take a chance to watch it. Thank you for supporting our work at Payday Report.

Donate to Help Us Continue the Fight For Racial Justice

Be the first to comment on "WATCH: “The Unlearned Lessons of the Tree of Life Massacre”"