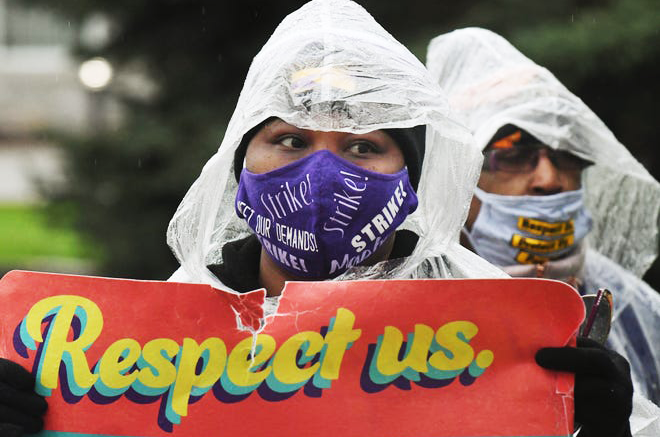 Last month, Payday broke the story of the 70,000-member Rochester AFL-CIO becoming the first local AFL-CIO to call for a general strike if Trump attempted to steal the election.

Now, other unions and civil rights groups across the nation have joined them.

Today a group of seven unions, both national and local, have called for a general strike in the case that Trump discredits the election results.

Together they follow in the footsteps of the 200,000-member Seattle AFL-CIO and the 60,000-member Western Massachusetts Area Labor Federation that also issued calls for a general strike earlier last month.

“We believe that the labor movement has an essential role in demanding and defending democracy,” read the unions’ press release obtained by Payday Report. “We believe in the power of the people — the multi-racial, working-class majority — and we are ready to defend our right to a free and fair election and a peaceful transition of power.”

Along with the unions, a group of more than 100 Black clergy members, including the former President of the NAACP, Reverend Cornell William Brooks, have signed an online pledge that calls for a general strike if Trump “attempts a coup or refuses to respect the legitimate result of the election.”

“We will need many different tactics — protests, occupations of state capitals, strikes — but fundamentally it will all require unity, courage, preparation, and discipline,” wrote the faith leaders in their pledge.

As reported in the Guardian last week, Sara Nelson, president of the 50,000-member Association of Flight Attendants, also called for a general strike.

“We will have to do the one thing that takes all power and control from the government or anyone with corporate interests in keeping this person in office,” she said. “And that is withholding our labor.”

So far, AFL-CIO President Richard Trumka has resisted efforts to call for a General Strike. However, with growing support for a General Strike effort endorsed by unions representing over 600,000 members, it would be difficult for Trumka to resist the growing momentum coming from the rank-and-file within organized labor.

For More Coverage Like This, Donate Today To Help Payday Cover General Strikes If Trump Steals The Election