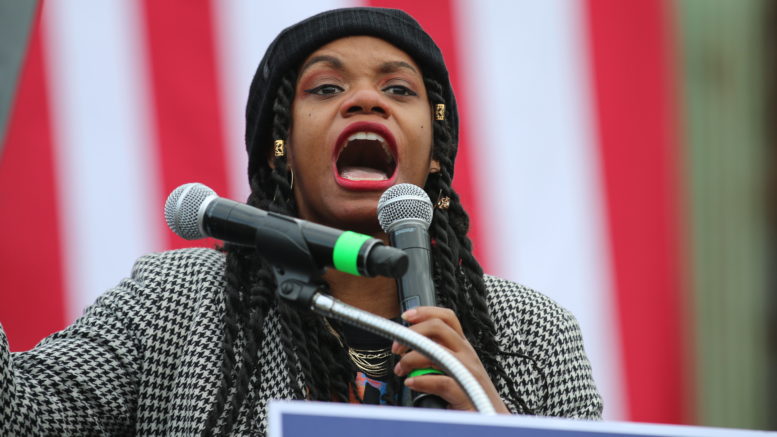 Waksmunski was one of nearly 200 attendees who drove to the heart of Pittsburgh’s deindustrialized Mon Valley to attend Senator Bernie Sander’s socially distant car rally. With cars jammed into the parking lot, attendees came to rally behind Sanders and hear other speakers, like local State Representative Summer Lee and Sara Innamorato, as well as the UE union, make one more effort to back Joe Biden for president.

People honked their horns as speakers took the stage, creating an atmosphere that felt more like a soccer game.

“I’ve never been to a rally like this — the energy is just electric,” said Waksmunski as cars blared their horns to show support for the calls to action issued by the rally’s speakers.

“In order to build our multiracial working-class movement, we first have to confront the forces of repression and violence that are threatening our values and our democracy,” said socialist State Representative Sara Innamorato, who opened up the rally. “We are in the closing weeks of the Presidential election and while we know there are people out there that feel that neither candidate is our champion, it is clear that one is our enemy.”

Rallying progressives to back Biden, Innamorato laid out the steep risks if progressives sat out the election.

“The re-election of Donald Trump would be an existential threat to our movement for justice because we cannot win democracy in the workplace if we lose it in our civic life,” said the state Representative. “We cannot recover from historic trauma when new ones are inflicted on us every single day, we can’t guarantee healthcare and housing for all as a pandemic rages and millions face eviction.”

After Innamorato, Black socialist State Representative Summer Lee, the first Black woman elected to the State House from Western PA, took the stage. The rally was being hosted in Lee’s district and Lee herself grew up in poverty in nearby Braddock less than a mile from the rally.

“If you grew up in this area then you know what it’s like to be a union worker, who is unsure if your job will be there at the end of the pandemic,” Lee said. “If you live in this area, you know what it’s like to be unable to pay bills as we are dealing with the economic downtown of the pandemic. This is a fight worth fighting, everyone of us is worth fighting for.”

Lee, who backed Sanders in the primary, urged skeptics to come over to Biden.

“I tell you that we have a duty to fight for our freedom. Whether you are disappointed or whether you have the best person on your ballot to know that you are on the ballot. I am here today because I am going to fight and vote for you,” she declared to a chorus of car honks. “It is your duty to show up this day, to show up for the next 10 days to show up till November 3rd so that we ensure that we are defeating Trumpism.”

“What we hope is that on November 3rd, that we’re not facing just an end, but we’re facing a beginning,” said Lee of the election.

Following Lee, a locomotive worker from United Electrical Workers and a Giant Eagle grocery store worker, facing illegal relations for organizing, spoke on the importance of electing Biden to create the space for additional organizing.

“I like that UE flag out there. UEEEE,” shouted UE Local 506 member Brian Pietrzak as he pointed to his union comrade George Waksmunski as activists hit their horns at the rally.

Pietzak, who led a nine-day strike at Wabtec in Eric in 2017, said that Biden would help labor take advantage of growing activism among organized labor, which has seen more than 1,000 strikes since the beginning of the pandemic in March according to Payday Report’s Strike Tracker. Pietrzak argued that electing Biden would give the labor opening to push for even more.

“Throughout the pandemic, union workers have been on the frontlines because we’re the last line of defense from preventing the economy from grinding to a halt,” said Pietzrak. “Joe Biden understands that we need to build an economy that works for everyone, not just powerful corporations and the ultra wealthy. That means working to build a strong, inclusive middle class. And Joe knows that the only way to ensure a strong middle class is with strong unions.”

“No union member should vote for Trump,” Pietrzak said.

After the workers spoke, Senator Bernie Sanders took the stage to the song “Power to the People.”

“What a beautiful parking lot, your cars look great and so do you,” said Sanders as he removed his N-95 mask to a cacophony of car horns honking for him. “Four years ago, Trump won Pennsylvania by 44,000 votes and we aren’t going to let that happen again.”

He assured the crowd that Biden would aggressively walk picket lines and support the trade union movement as President, adding that he had spoken to Biden and Biden had said if he were elected president, he pledged to aggressively support picket lines.

The comment echoed statements made by Obama in 2007. During President Obama’s primary campaign in 2007, Obama famously pledged to walk the picket line if workers’ rights were threatened. However, Obama never followed through on this pledge and ignored unions when they urged him to march with Wisconsin workers being stripped of collective bargaining rights in 2011.

But Sanders guaranteed that Biden’s presidency would be different when it came to standing up for workers’ rights. The speech came just days after Politico broke the story that Sanders had been pushing to be Secretary of Labor in a Biden administration.

“One of the goals that Joe Biden and I have is that we know that workers do well and the middle class does well when we grow the trade union movement in America,” Sanders told the crowd. “There are millions of workers who want to join unions but are unable to do so because of illegal corporate activity. We are going to put an end to that.”

While many progressives are disappointed in Biden, on Saturday, progressives like Senator Bernie Sanders and Summer Lee urged activists in Western Pennsylvania to not allow the state to vote for Trump again. To a chorus of car horns at the socially distant rally, they urged people to vote for Biden to create the space for more organizing.

“I hope that you will show up and vote to protect every Black, brown, queer, marginalized and disabled people because they are on the ballot,” Lee said.

“Our hope is on your ballot.”

Donate to Help Us Cover the 2020 Election in Western PA

Be the first to comment on "Bernie, Summer Lee & UE Rally Skeptics for Biden in Western PA"