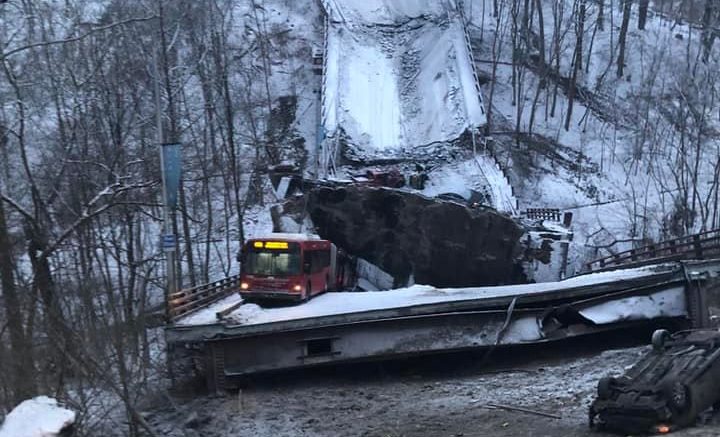 Greetings from the Burgh, where it’s been a very scary day as the Fern Hollow Bridge collapsed. The bridge links Pittsburgh’s Squirrel Hill neighborhood to my childhood neighborhood Regent Square through the 700-acre Frick Park.

The good news is that no one was seriously hurt, and the three people taken to the hospital are in “fair condition,” according to city officials.

Fortunately, the bridge collapsed at 6:39 a.m., and schools were delayed by two hours, so many parents were home rather than on the roads. As someone who takes the 61B bus (pictured above) two to three times a week across this bridge, I can’t begin to tell you how close to home this hits (Payday literally had their BBQ just 100 yards from this bridge.)

Shortly after the Fern Hollow Bridge collapse, tweets resurfaced from 2018 when a concerned resident contacted Pittsburgh 311 Twitter account to warn them of the bridge’s collapse.

“I hope someone is keeping an eye on the underside of the Forbes Avenue bridge over Frick Park? One of the big “X” beams is rusted through entirely,” Dr. Greg Kochanski, a Pittsburgh resident and physicist, wrote on Twitter in 2018.

According to PennDOT records, there are 175 “at-risk” bridges in Pittsburgh, leading to concerns that this collapse could be a warning of other impending collapses. (For more info go, here).

The four-lane Forbes Road is a major transit-heavy roadway that cuts through the middle of the 700-acre Frick Park. The road’s closure will lead to serious transit delays and congestion in neighboring communities.

“People in my area use this bridge every day,” wrote State Representative Summer Lee on Twitter, who represents this community. “This horrifying collapse was 100% preventable. This is what happens when you fund mass incarceration & the military-industrial complex at the expense of core priorities.”

President Joe Biden, who happened to be in Pittsburgh for a pre-scheduled appearance to talk about infrastructure, visited the collapsed bridge site.

“I didn’t realize that there are literally more bridges in Pittsburgh than in any other city in the world,” Biden said in a press conference. “We’re going to fix them all.”

Donate to Help Us Cover the Bridge Collapse in Pittsburgh.

Many labor activists were excited when workers from the iconic Appalachian chain Tudor’s Biscuit World announced their bid to unionize at the Elkview, West Virginia location in November.

However, early this week, it was announced that the union drive was defeated by a margin of 7 against 5 in favor of the union.

The defeat comes after the union alleges that several workers were fired for their union activity. UFCW Local 400, which led the union drive, has already filed several unfair labor practice charges against the company and plans to ask for another union election.

“It’s disheartening,” 64-year-old employee Cynthia Nicholson told the Charleston Gazette-Mail. “We’re going to keep fighting because you just cannot let this injustice go on. That battle is not yet over.”

For more, check out The Charleston Gazette-Mail.

In an interview last year, film director Boots Riley told me that the biggest mistake of the ruling class was coming up with the “essential worker” term because it made workers start “having more of a sense of their own worth.”

Now, a new study by the media critic Adam Johnson shows that The New York Times is using the term less. Johnson writes:

During previous surges, uses of the terms increased roughly proportionate with hospitalizations. This makes sense: The more acute the pandemic, the more people were hospitalized, the more the media would focus on the effects on “frontline” or “essential workers.”

But the current Omicron surge, despite having a comparable amount of deaths (in absolute numbers) and heretofore unprecedented hospitalizations compared with previous surges, one sees no such corresponding uptick in usage. In fact, use of the terms has gone down to an all-time low since the pandemic began in March 2020, with only four thus far in January, on pace for 9, compared to over 100 the last time hospitalizations were this high. The workers once referred to by the Times as “essential” and “frontline”-healthcare workers, nurses, teachers, grocery workers-are no longer afforded this normative label, but are instead now largely referred to by their job titles alone.

For more, check out Johnson’s column on Substack.

“The way the doctors are treated by USACS affects the very essence of our presence in this hospital, caring for the patient,” Allan Kamara, RN, SCVMC ED nurse, and an ED physician, told MedPage Today. “When you lack continuity of care for a patient in any way, anybody in healthcare will tell you, that’s a recipe for disaster.”

For more, check out MedPage Today.