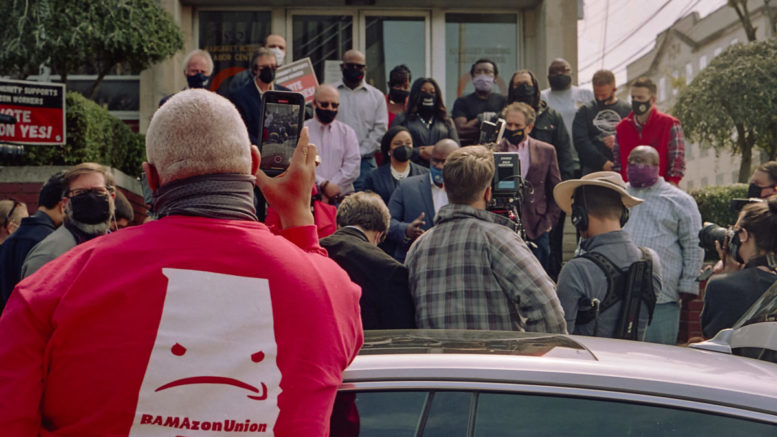 Greetings from the Burgh, where I’m slowly regaining my energy to write the newsletter as I struggle with the effects of long COVID.

Thanks again for all those donations as I slowly return to work.

60 Starbucks Seeking to Unionize in 19 States

Early last December, Starbucks workers at a Buffalo store became the first in the nation to unionize. Now, workers at 60 Starbucks stores in 19 states have opted to do the same.

The movement has won massive community support in every Starbucks that has organized, and many expect it to grow given Starbucks’ history with difficult working conditions.

“We have a turnover rate of 140%,” Santa Cruz-based Starbucks worker Joseph Thompson told Restaurant Dive. “There’s been so many different issues at the store, but [workers] are dedicated to making sure it can continue in a great manner. And the only way we can see that happening is through a union.”

(Check out a map of all the places where Starbucks workers are organizing.)

One of the leading names mentioned for the Supreme Court vacancy is Michelle Childs, who previously worked at anti-union law firm Nexsen Pruet Jacobs & Pollard.

While it’s unclear if Childs consulted on anti-union cases, she did defend employers who were being sued for racial discrimination. Alex Sammon at the American Prospect has the story:

Bloomberg Law has 25 cases registered in which Childs participated during her time at the firm; 23 of those involve alleged employment discrimination or other employment-related civil rights violations. Race and gender were common factors in such suits; seven such cases entailed race-based job discrimination, and another three involved sex-based job discrimination. In all but two registered instances, Childs was not representing the plaintiff but the defendant, meaning that she overwhelmingly represented employers accused of violating civil rights and gender discrimination laws in the workplace.

These cases catalogued commonplace abuses. In Greene v. Conseco Finance, for example, the plaintiff, an African American woman, alleged race and pregnancy discrimination in a situation where the company denied her a promotion and then terminated her outright. Childs represented the employer, Conseco. The case eventually resulted in a jury siding with the plaintiff, awarding her $193,000 in damages after Childs withdrew. In Harris v. L&L Wings, a plaintiff alleged near-daily sexual assault by a workplace supervisor for years; Childs represented the company. A jury eventually sided with Harris, the plaintiff, awarding compensatory and punitive damages and even attorney’s fees.

In Alabama Amazon Re-Do Election, Half of All Workers Voting Are New Employees

In March of 2021, Amazon workers in  Bessemer, Alabama, voted against an Amazon union drive by a margin of 738 to 1,798 out of a total workforce of nearly 6,000. However, the National Labor Relations Board set aside that union election as a result of illegal anti-union intimidation by the company and ordered that a new election occur.

This week, workers at Amazon in Alabama began voting on a new union election that is set to conclude on March 28. Union organizers say that workers, who saw Amazon fail to deliver on their promises in the last election to improve conditions without a union, are less receptive to the company’s union anti-union message.

However, a news report by Birmingham News shows that half of all Amazon workers voting in this election are new employees, who may not be as receptive to the union’s message. Indeed, with Amazon wages starting at $15-an-hour, many service sectors will be doubling their pay to work at Amazon’s warehouse. (See our on-the-ground analysis from last year on how these forces helped to defeat the union drive)

For more on the re-do union election, check out The Birmingham News.

Unions that Fight on Behalf of Temps See 21% Wage Increases

As a result of labor law, many temp workers employed in workplaces alongside unionized workers are not covered by union contracts. In some workplaces, unions choose not to fight for temp workers and instead focus on benefits for their union’s current members.

However, a new study by Cornell’s Industrial and Labor Relations School shows that in workplaces where unions do fight on behalf of temp workers as part of contract talks, these temp workers see, on average, a 21% wage increase.

“The findings may rankle some ‘progressive’ unionists,” said Adam Seth Litwin, associate professor of labor relations, law and history in the ILR School and lead author of the study. “Old-school, adversarial, non-cooperative unionization is out of vogue. And there may be a number of good reasons why. But at least with respect to helping non-traditional or non-core workers, unions are much more helpful when going head-to-head with management, rather than partnering with them.”

Check out Cornell’s School for Industrial and Labor Relations for more on the study.