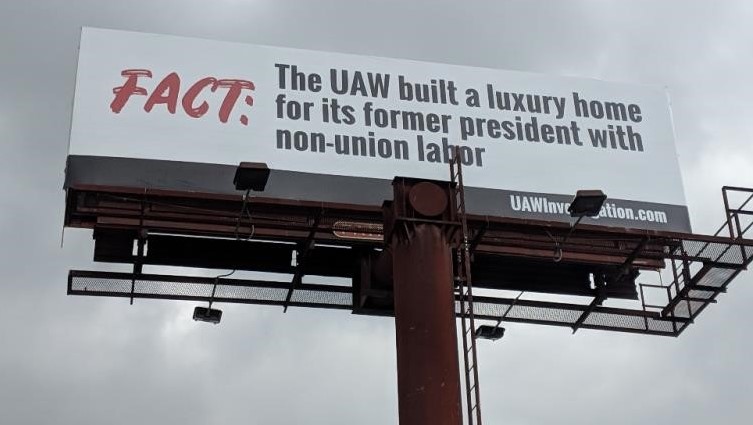 Greetings from the Burgh, where the labor movement has had a rough day, but first an appeal funds

Folks, it’s coming to the end of the month and freelance checks that should have been here, well, they aren’t here. So, pass the hat and donate a few bucks if you can.

However, after votes were counted today, the Pitt Graduate Employees Union, a chapter of the Steelworkers Union, lead by only 37 votes. However, the University of Pittsburgh took an active role in challenging ballots; presenting challenges to 153 votes.

The union quickly denounced the University of Pittsburgh management for interfering in the election.

“We believe the count today is due to the university’s misleading information and active efforts to obstruct the campaign and election, including pressuring graduate student workers into voting no,” said Hillary Lazar, one of the leaders of the graduate employees union.

In yet another sign that Volkswagen has abandoned its declared union neutrality, Volkswagen delivered an NLRB legal brief this week seeking to delay a union election at Volkswagen until 2020.

Since 160 maintenance workers at the plant voted to unionize in 2015, Volkswagen is arguing that a new union election can’t be held for that group of workers as well as production workers until the legal issues are resolved.

However, the UAW has already withdrawn their petition for the maintenance workers, but Volkswagen is arguging that under federal another union election can’t be held until the next calendar year. Previously, Volkswagen had argued that they would only recognize a union of maintenance and production workers.

The UAW blasted the legal move by Volkswagen as the latest sign that the German automaker is not truly neutral as this election approaches.

“Volkswagen’s current maneuvering to avoid an election in a wall-to-wall unit that it has for years argued is the only appropriate unit at its assembly plant is disgraceful,” UAW lawyer Michael Schoenfeld told the Chattanooga Times-Free Press.  “Volkswagen’s ridiculous challenge to the petitioned-for unit should be immediately rejected and an election ordered without further delay.”

Anti-UAW Billboards Go Up in Chattanooga

As VW seeks to delay the union election in Chattanooga, anti-union forces are kicking their efforts into high gear.

This week, union buster Rick Berman and his group Center for Union Facts put up a series of billboards on major highways around Chattanooga in order to sow doubt in the UAW.

“The UAW built luxury home for its President with non-union labor” reads one of the billboards.

In the race for Kentucky’s Governor slated to take place later this year, the ongoing wildcat strikes in Kentucky are likely to play a major role.

The most recent flashpoint is a set of subpoenas issued by the GOP Governor Matt Bevin’s administration to school districts to find out, which teachers are calling in sick to protest state policies. The state’s Attorney General Democratic Governor Andy Beshear has promised to fight the subpoenas in court.

“If the governor’s subpoenas are not withdrawn by the end of the week, I will file suit on Monday,” Beshear said in a statement Wednesday afternoon. “See you in court.”

(For more on the fight go to the Louisville Courier-Journal).

Beshear, who is considered the front runner in the Democratic Primary for Governor held on May 21st, is feeling pressure to stand up for the teachers union as he is expected a stronger-than-expected challenge from his life from former state auditor turned progressive solar energy entrepreneur Adem Edlen

Daniel Marans over at the Writers’ Guild-represented HuffPost has a look at the dynamics:

In a state where Democrats typically support coal and oppose abortion rights, Edelen is blazing an uncharted path on environmental and social issues. He speaks out in support of abortion rights and the need to address the state’s persistent racial inequities and identifies climate change as a major threat to the state. “Every farmer and every hunter in Kentucky already knows climate change is real,” he said.

Stances like those won Edelen the backing of the political arm of the state’s largest liberal nonprofit, Kentuckians for the Commonwealth. The group has 12,000 members, including a sizable presence in Louisville’s predominantly black West End.

“Adam was the first person who really told us what he is for,” rather than what he is against, said Meta Mendel-Reyes, chair of Kentuckians for the Commonwealth.

Approximately 775,000 undocumented immigrants live in the state of Florida, making it one of the most immigrant populated states in the country.

The Florida House passed a similar measure four years ago, but the bill died in the Senate. Now with narrowly-elected Florida Governor Ron DeSantis declaring sanctuary cities a top priority, the bill was able to sail through both houses.

“That’s why this is moving forward,”  State Senator Joe Gruters told the Miami Herald. “It has opened up some doors that weren’t previously available.”

This week, NFL Draft in Nashville has received a large amount of publicity, but labor advocates argue that the draft system perpetuates inequality.  Our friend Oliver Bateman has a look at Mel Magazine:

You see, even going early in the draft is no guarantee that you’ll earn out your true value. “With a first-round pick, the league owns the first five years of a star rookie’s career as a result of the four-year rookie contract they sign, plus the fifth-year team option the player’s team can exercise. Then the team can ‘double tag’ the player, twice paying them a high but single-year ‘franchise player’ rate, thus ensuring the player doesn’t hit free agency until after their seventh season. Again, going back to that injury analysis I did, only 481 NFL players are in year seven or higher, 21 percent of the league.”

The result of all this, Moore notes, should be obvious enough to anyone who follows the league. Contending teams hope to land a stud defensive end or running back on a relatively affordable rookie contract, then invest the remaining chunk of their salary cap in a multi-year deal with loads of guaranteed money for a star quarterback like Matt Ryan ($100 million guaranteed), or if they’re less lucky, an above-average quarterback like Kirk Cousins ($84 million guaranteed). “Like I discussed at length in my book, having a system of low, undervalued compensation for big chunks of NFL rosters has allowed teams to compete for championships with high-cost, first-tier players paired with rookie contract players. For example, out of the $5 billion in salaries the NFL paid in 2017, 17 percent of the total went to just 50 players and 50 percent of it went to 150 players, from a pool of 1,700 or so players on active rosters.”

“These players don’t even get paid their fair market value in college,” Moore continues. “Cork Gaines at Business Insider published a story in which he found that University of Texas football players are worth about $670,000 each to that school, which is more than what every single player drafted after the start of the fourth round earns as a salary in their first year in the NFL. In fact, every player drafted in the fourth round and later doesn’t make a million in salary in any year during their rookie contract, although their signing bonus helps some exceed $1 million in their first year.”

In other words, players — particularly players who lose larger amounts of their larger-than-national-average salaries in markets with high state and local taxes — end up woefully underpaid by year four of their careers, should they even make it to that fourth year. Meanwhile, a bright star working on a one-year “franchise tag” who generates 16 games’ worth of SportsCenter highlights but suffers some disgusting, Bo Jackson-esque injury in his last play of the year could vanish from the national sporting scene with nary a peep.

For more go to Mel Magazine

The Tenement Museum in New York City has finally unionized on its third try:

Workers of the Tenement Museum have attempted to unionize twice in the past, but in both cases were blocked by management. The first attempt at unionization occurred in 2007. The second attempt in 2014 was successfully quelled as well. This time, the workers report a more accepting management, which they attribute to the museum’s new leadership under President Kevin Jennings, a former Obama administration appointee who comes from an education and activism background.

Maida Rosenstein, president of Local 2110 UAW, told Hyperallergic that this time around, the Tenement Museum distinguished itself from other museums by remaining neutral in the elections on a union. Rosenstein attributes the change of policy to the new president, but also notes that previous attempts came in times of a different political atmosphere, when “There wasn’t the level of activism that we see in New York now.”

The Tenement Museum is the second New York City museum to successfully unionize in 2019. The first was the New Museum, whose workers voted in favor of a union in January. Workers at the Bronx Museum of the Arts, Museum of Modern Art, the New Museum, and New-York Historical Society are also members of UAW (United Auto Workers) Local 2110.

“This is a time when more workers at cultural institutions are looking at unionization,” Rosenstein said. “There’s a growing disparity in the difference between the top echelon of some these cultural institutions and people who are working on the day to day level. A lot of those talented and educated employees work for low wages and without overtime compensation.”

For more, go to Hyperallergic.

Folks, I gotta run to go on a date but pass the hat one more time so we can make rent this month incase those freelance checks don’t come in.

Be the first to comment on "VW Seeks to Delay Union Election Till 2020 – Pitt Grad Election Too Close to Call – KY. Gov Goes Subpoenas Teachers"