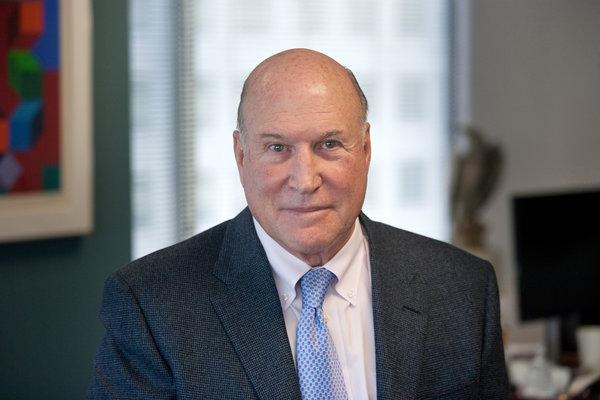 “We don’t need union bosses in Detroit telling Tennessee what’s best for our workers,” U.S. Senator Marsha Blackburn (R-TN) is fond of telling audiences as the anti-union campaign at Volkswagen in Chattanooga, Tennessee heats up.

However, the person leading the anti-UAW efforts in the press in Chattanooga is a New York City anti-union lawyer turned ad man named Rick Berman.

Dubbed “Dr. Evil” by CBS’s 60 Minutes, Berman started his career as a management lawyer at Bethlehem Steel in the 1960s before working as the Chamber of Commerce’s lead anti-union lawyer in the 1970s as they laid for their assault on organized labor. Later, Berman went into the restaurant industry before amassing a small fortune and starting his PR group Berman and Co to argue against drunk driving laws and laws prohibiting smoking in restaurants while always focusing on the need to combat unions.

At age 76, Berman says he has no plans to retire and use his small fortune to see the world as other wealthy men his age might do.

“You know, there just is nowhere that I really want to go,” Berman tells me by phone from his downtown Washington D.C. office three blocks away from the White House. “I’ll keep working unless it’s not fun.”

What Berman says excites him in the twilight of his life is what he sees as taking on “corrupt” union leaders.

When I attempt to ask Berman who is funding his efforts, he interrupts me. “Now Mike, you know better than that,” says Berman as he lets out a loud laugh.

I first got to know Rick Berman when I worked at POLITICO five years ago. The veteran union buster would invite me out for beers at Joe’s, an ornate steakhouse with two-story tall 19th-century marble columns in their dining room, less than a football field away from the White House.

As a yinzer, who had grown up in a blue-collar part of Pittsburgh, I felt somewhat uncomfortable–I had never been anywhere as fancy as Berman’s local favorite lunch spot.

Despite being the son of a UE union leader and a NewsGuild union activist myself, Berman was also very jovial and always very excited to see me. In his elderly years, Berman seemed to relish in imparting on me the lessons of the dark art of union busting that he had learned over the course of his life to one of the few labor reporters in town.

In his eighth-floor corner office with a panoramic view of Washington’s monuments, Berman would smile with pride as he pointed to a picture of former Senator and 1972 presidential candidate George McGovern on the wall. He would explain to me that getting the then 87-year-old McGovern to cut an ad for him blasting card-check signup rights was the key to defeating the Employee Free Choice Act at the height of Obama’s power.

Now, Berman is engaged in a crucial battle to defeat the UAW at Volkswagen. A win at the German-owned automaker would be the UAW’s first successful union organizing drive at the foreign-owned auto plant in the South. A win there would give a massive boost to workers in the South who have sought unsuccessfully to organize the growing auto industry in the region.

The stakes for Berman in many ways are higher than they were when he led the efforts to defeat the Employee Free Choice Act.

In an exclusive interview with Payday Report, Berman laid out his strategy for taking on the UAW in the press as they seek to unionize Volkswagen in Chattanooga.

“We are looking at all of the misbehavior and the fraud practiced on the UAW members that have only recently come to light, and we are giving it some exposure,” says Berman of a series of ads highlighting the conviction of 4 top UAW officials for accepting $4.5 million in bribes from Chrysler in exchange for taking concessions from the company at the bargaining table behind the backs of their members.

The ads, which first appeared in the Chattanooga Times-Free Press as well as in the Detroit Free Press this weekend, focus heavily on how the UAW has had to spend $1.5 million in union dues to defend itself against the federal bribery investigation according to Department of Labor records.

Berman says next he intends to focus on how the UAW paid for non-union construction labor to build a $1.3 million cottage for retired UAW President Dennis William at the UAW’s 1,000-acre retreat on Black Lake in Northern Michigan.

The ads also highlight a website, which Berman has set up, UAWInvestigations.com, which links to news articles on the corruption scandals plaguing the UAW. The site also highlights a 2017 New York Times investigation into how UAW representatives at Ford plants in the midwest routinely refused to file sexual harassment complaints on behalf of their female workforce.

The aim, he says, is to sow doubt in workers’ minds about whether the UAW really will represent them.

“Knowing about the UAW would be enough for me to vote no, I wouldn’t give my money to those guys,” says Berman. “All you gotta do is read the newspaper and figure out how corrupt they are and I don’t know if I would want to join.”

Berman says he thinks it’s a message that could persuade a lot of workers in the non-union South to vote against the UAW.

“It will resonate with a lot of them,” says Berman. “Whether it’s the main issue, I don’t know. There are a lot of issues….A lot of people don’t like [union] seniority systems because they can’t move along based on their own abilities if the line is too long to get promoted.”

Despite the fact that Gallup opinion polling shows that union approval is at its highest rate in 15 years with 61% of Americans approving of unions, Berman says that even people who might see themselves theoretically as pro-unions can be turned against them.

“They may be in favor of organized labor in a poll, but I’m not certain how many of them would vote yes to join a union election in their workplace–that’s a very different question,” Berman points out. “It goes back to you may think unions are good, but you might not want to join one because of all the rules, regulations, and costs.”

Although federal labor law prohibits employers from weakening current labor rules in the workplace once there is a union, Berman says that workers can be persuaded that conditions might actually worsen under a union contract.

“There is no guarantee your deal is going to be any better after the contract is signed, you know there are givebacks and giveaways; some things are better for some people, some things are worse for people. How it works out for you is anybody’s guess,” says Berman.

“The only thing that [unions] got to sell is that we will see to it that you get treated fairly,” says Berman.

Berman concedes that in Chattanooga the UAW may have an opening to succeed on issues of arbitrary shift changes that disrupt family life when Volkswagen switches workers from daylight to night time shift.

“A lot of times people vote for a union when they do vote for a union just because they are aggravated over some point and it’s unfortunate that comes down to a couple of things like that which might be easily addressed differently so now they will try to pay dues to someone else to talk for them, but that’s an expensive way to get your shift changed problem taken care of,” says Berman.

UAW leadership rejects the idea that workers would be paying to have someone else represent them.

“Why shouldn’t Chattanooga workers have a voice in bargaining over things like lack of notification for overtime impacting childcare, or VW having a $19 billion profit but only giving workers a 50 cent an hour raise. Every other Volkswagen worker in the world has the right to bargain that,” says Rothenberg referring to the fact that 43 out of Volkswagen’s 45 plants worldwide are unionized.

Ultimately, the veteran union buster Berman says the campaign will come down to whether or not workers have faith in the UAW.

Be the first to comment on "EXCLUSIVE: Union-Buster Rick Berman on His Anti-UAW Strategy at VW in Chattanooga"