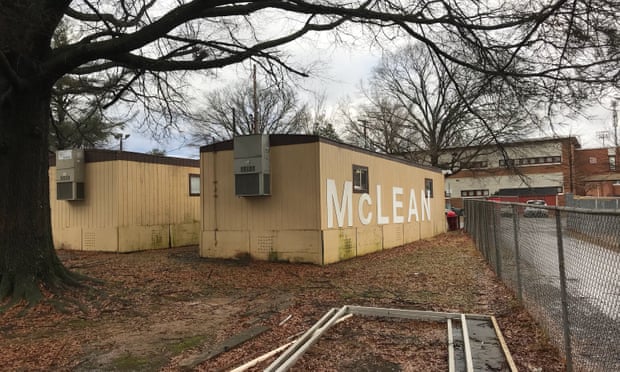 22,000 students in Fairfax County alone learn in plywood trailers like this pictured outside of McLean High School (Mike Elk/Guardian)

Filing a dispatch for the Guardian, Payday Senior Labor Reporter Mike Elk has a look at education funding inequities in Virginia:

As a freezing rain poured down on Virginia last week, a student dressed in only a light red sweater made a mad 40-yard dash from her modular trailer classroom across the parking lot into the warmth of McLean high school in Fairfax .

Due to overcrowding, more than 22,000 students in Fairfax county receive their education in cheaply constructed plywood trailers, often with visible signs of green mold, like those parked next to the baseball fields next to McClean high school.

Those trailers, the poor state of school funding in general, low teacher pay and now the huge tax breaks the state is giving to lure in Amazon have led the teachers to strike on Monday, the start of the latest in a series of strikes by educators across the US.

In Fairfax county, the third richest county in America, there are over 800 trailers serving as temporary classrooms because the school district cannot afford to build new classrooms.