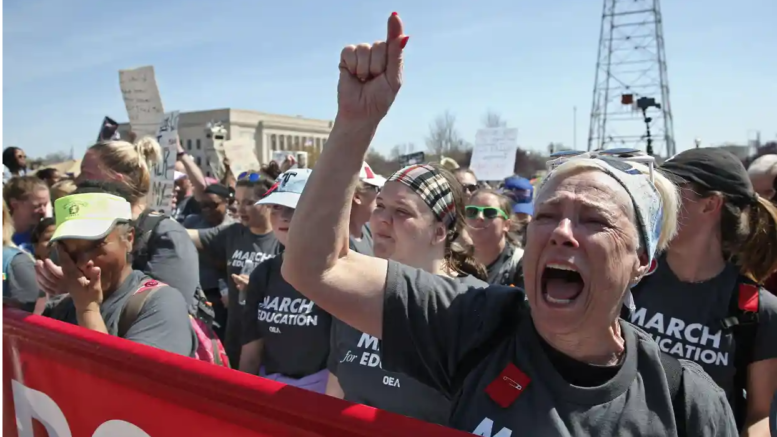 Greetings from the Burgh, where we’re ready to head down to the ballpark for Clemente Day festivities. (Be sure to check out our story on how Clemente helped get the players’ union behind Curt Flood.)

The University of Oklahoma Set to Strike Monday

In 2018, Payday Report traveled to Oklahoma to cover the 10-day long teachers’ strike. Now, educators and students are going on a two-day walkout at the University of Oklahoma (OU) next Monday and Tuesday to protest the lack of COVID protection measures.

“OU remains committed to forging ahead recklessly, with no meaningful COVID policies in place, having ignored these pleas from its community, refusing any semblance of shared governance,” the OU Days of Action website read. “With procedural options clearly exhausted, we must take the next step.”

Instead of holding classes, professors are encouraged to hold teach-ins on how the school could better handle the pandemic.

For more, check out OU Daily.

On Tuesday, the staff at the SmartStyle hair salon at Walmart in Allegany, New York, locked the doors and put up a sign saying “We Out.” The staff posted a notice telling their customers of the new locations of the hair salons and where they could find them.

“The last nine months especially has been fairly taxing with us having had a limited staff and no support from the higher-ups,” Roth told the Olean Times Herald.

For more, check out the Olean Times Herald.

In honor of Clemente Day, donate $21 to keep the Strike Tracker going.

Finally, if you can, please consider signing up as one of our 624 recurring donors today.

Every new donor helps us become more sustainable and helps us focus more on stories, not fundraisers. Donate today.

Under the union contract between ATU and New Orleans Regional Transit Authority, the city should provide drivers with hazard pay for work during Hurricane Ida, which the union said they did not receive for all of their work.

Additionally, the transit authority was supposed to provide hotel rooms for all drivers who worked during the storm. However, more than a dozen drivers say that they were left without places to sleep.

When ATU local President Valerie Jefferson raised this issue with management, she was fired. Management claimed she was fired for “swearing” at management in a “threatening way,” however, the union disputes this claim and points to previous incidents of retaliation against bus drivers.

Bus drivers say that they are outraged at the way that they’ve been treated following the storm.

“So they needed help from the union to bring in operators, so of course I helped them,” Jefferson said at a press conference yesterday. “Operators came in, and they were sad because they were leaving home, leaving families. …We sacrificed.”

For more, check out The Lens.