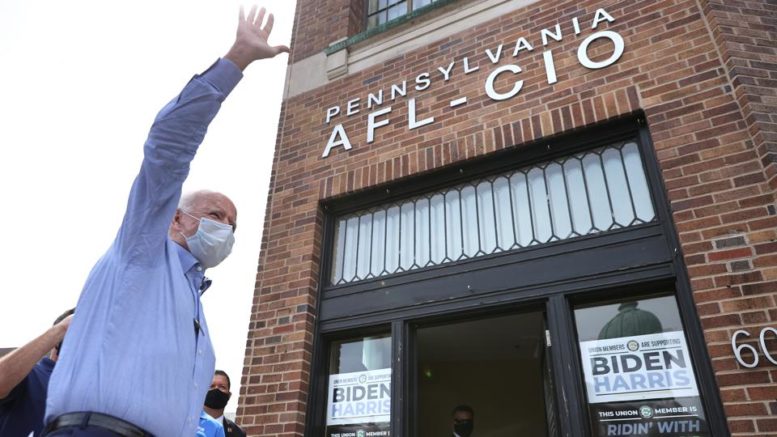 Biden campaigns outside of PA AFL-CIO

Greetings from the Burgh, where snow is on the forecast.

As part of Biden’s inauguration, his home states of Pennsylvania (his birth state where he grew up) and Delaware are hosting a series of online Inaugural Events. However, the events have drawn criticism when it was recently discovered they were sponsored by Ballard Spahr, a law firm specializing in union avoidance.

The firm, Ballard Spahr, was paid more than a million dollars to successfully defeat a union election of graduate employees at the University of Pittsburgh. The union drive was defeated by a mere 37 votes in April of 2019 in an election.

“Can anyone from @PADems explain why a law firm that specializes in ‘union avoidance’ (as per their own website) is sponsoring this event Anyone?????,” tweeted Allegheny County Councilwoman Bethany Hallam.

With many frontline workers at risk because of Trump rioters, unions are finding creative ways to fight back.

The flight attendants union successfully pushed to get federal authorities to include Trump riots on the “Do Not Fly List.”

The hotel workers union in DC is asking hotels to close during the inauguration and authorizing its members to go on safety strikes if they feel unsafe.

Transit workers in DC are also threatening safety strikes if conditions are unsafe in the transit system during next week’s inauguration.

We are working hard to cover this story so help us stay focused on reporting and not fundraising.

Facing the threat of COVID, hundreds of workers at one of Maine’s largest hospitals are now unionizing.

“By joining the union, they will have a voice to protect their patients and ensure that they continue to receive the high-quality care they deserve, especially during the pandemic,” said Maine State Nurses Association President Cokie Giles.

However, the hospital is fighting back with misinformation that unionization could actually hurt the nurses.

“There are no guarantees as to what a union can do for our nurses in terms of pay, benefits and working conditions. Nurses could be better off, worse off or stay the same. From our perspective, the union cannot provide the solutions for the challenges we face at MMC,” Maine Medical Center President Jeffrey Sanders wrote in a letter to nurses this week.

1,400 Grocery Workers Threaten to Strike in the Bronx.

For the first time since 1986, 1,400 grocery workers employed by Hunts Point Produce Market are threatening to strike as the company refuses to give grocery workers, who make $30,000 to $40,000 annually, a $1 an hour raise.

Workers at Hunts had threatened to strike in the past. However, given the sacrifices that many frontline workers have made with workers getting sick, workers feel that now things are different.

“What makes this different is that we see our members showing up for the past 10 months, a testament to their strength,” Teamsters Local 202 President Daniel Kane said at a rally yesterday. “Everybody out here will stand out here until we get a little justice, until the eyes of the powerful and wealthy start realizing that workers matter, that regular everyday people matter.”

One group of workers who has not gone on strike in major numbers so far are the nation’s truckers. Despite the low pay, long hours, overworked days, and unsafe conditions, a nationwide trucker strike hasn’t materialized. Fleet Owner has the story:

The Teamsters in the 1960s, then led by Jimmy Hoffa, not only negotiated rates for their union members but, by default, other drivers as well. The union negotiated The National Master Freight Agreement which set wages and working conditions for truck drivers across the country. Driver pay and benefits were relatively high, solidly middle class, and were often bettered incrementally during subsequent negotiations as a nationwide driver strike was a formidable threat.

This all changed largely due to industry deregulation. Drivers lost their negotiating power as fleets undercut each other to entice shippers to sign on. Ironically, many independent drivers sought deregulation because they wanted to enter new markets and wrangle for higher rates, but deregulation was not always to their benefit.

“I don’t think the outcomes were everything they had hoped, but that’s a strong example of where owner-operators were able to see the goal that they wanted realized, which was to deregulate the industry,” [Steve Viscelli, a former driver and sociologist at the University of Pennsylvania] said. said. “Again, for many of them, I don’t think it turned out anywhere near what they hoped, but they certainly played an important, at least symbolic role, in representing to Congress and the Carter administration the downsides of regulation for small-business truckers.”

For more, go to Fleet Owner.

Over the American Prospect, our friend Alex Sammons has a look at how the effects of Prop 22 are more devastating than imagined:

Uber, Lyft, and DoorDash will benefit most from the new regime. But companies beyond the gig economy saw their opportunity to get in on the low-cost labor pool. In January, grocery giants Vons, Pavilions, and Albertsons announced that they’d be firing their full-time, benefits-receiving delivery staff, venerated just months ago as “essential workers,” and replacing them with subcontractors from DoorDash, which has secured a nationwide deal to take over the service. Only unionized staff was spared in the layoffs. That move is a startling sign of things to come, as companies realize that Prop 22 allows them to subcontract the same labor at a lower cost, making Uber, Lyft, DoorDash, Postmates, and Grubhub look more like traditional staffing agencies than innovative, high-tech products.

Meanwhile, health care stipends provided under the new Prop 22–devised “benefits” program are proving to be a pittance. Uber has offered no more than $400 a month toward health insurance for drivers who hit maximum hours standards, a small percentage of the overall cost (the average premium for the lowest level of coverage on the ACA exchanges for a family is $1,041 per month). To even qualify for the full stipend, workers must already be the primary policyholder on an existing plan and put in at least 25 “engaged” hours per week, excluding time spent waiting for jobs or driving to and from them. It takes about 40 hours of work to clock 25 hours of engaged time, according to the aforementioned Berkeley Labor Center study.

Donate so we can keep covering how labor is fighting back against Trumpism.

Finally, remember the best way to support us is to sign up as a recurring donor today.