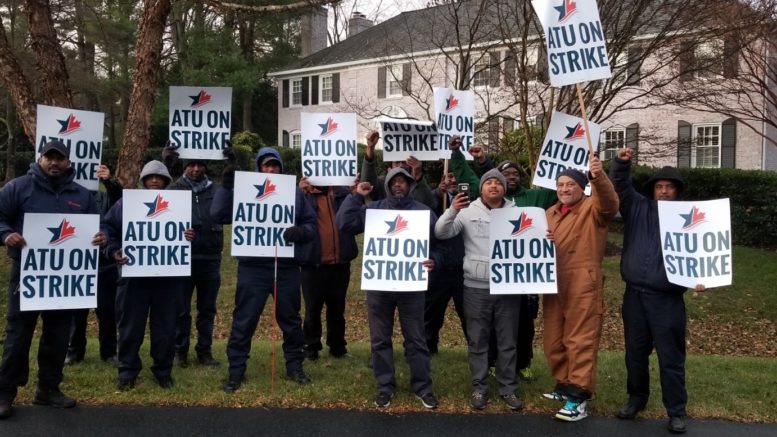 “I’m still having those headaches,” says a weary Raymond Jackson, a President of ATU 689 local in Washington, DC.

While he’s recovering from COVID, and despite being exhausted, Jackson is forcing himself to face a new threat to transit workers like him: violence from Trump rioters in our nation’s capital.

During the Capitol riot last week, thousands of rioters traveled from their motels in the suburbs of DC to the National Mall via DC’s transit system.

After the riot, Many rioters started fights and attacked the heavily Black transit workforce going to and from the Capitol building. Fearing for their lives, many transit workers fled their posts in subway stations at the urging of their union, who didn’t want to see their members killed.

As a full-time union president and a long-time Metro mechanic, Jackson is now working for the 16,000 members of his union in the nation’s capital as Inauguration Day approaches next Wednesday.

“I gotta get up and work, though,” says Jackson. “I gotta make sure our workers are safe and make sure the riding public in this region is safe.”

For the past week, Jackson’s union has been pushing for more security on transit so that transit workers aren’t left to fear for their safety.

“We have been working hand-and-hand with the authority to make sure that our members are not getting into work in any kind of unsafe condition,” says Jackson. “We are not going to put ourselves or the public in harm’s way ‘cause some radical thinking group of people think they wanna overthrow the government.”

So far, Jackson says that the transit plans have been lacking and that they are asking the transit authority to do more. If not, he says he has told his members to walk off the job.

“We are asking the jurisdiction in this region that they need to protect the workers as well as the rides by any means necessary. That means that if you put armed national guardsman in our station, then you should do that.”

Jackson says the authorities have promised to do more to protect workers and he hopes that they follow through on their plans.

“What we have told members is that if you don’t feel safe then leave. If it’s not safe enough for you then you have to leave, I tell workers.”

Under federal labor laws, workers are guaranteed the right to refuse to work in conditions that could result in bodily or physical harm. With riots and protests expected in all 50 states next week, ATU is telling transit workers nationwide that the union will back them legally if they decide to walk off their jobs.

“We want our members to know they have a choice and the legal right to refuse unsafe work during political violence,” says national ATU President John Costa. “That includes refusing to run a route during or near armed demonstrations, riots or other forms of insurrection, and taking action such as deviating from their routes to avoid areas with developing dangers.”

Jackson’s union is but one of several that have mobilized to counter the threat of right-wing fascists rioters.

As Jackson’s union fights to make the nation’s transit system safe, he says that the union has found overwhelming support from members of the community, who know that the workers are putting their lives at risk during a volatile time in the history of the nation’s capital.

With strong community support behind his union’s effort to secure the transit system, he is hopeful that the transit system will be safe for all in DC to use during the inaugural. However, if need be, Jackson says that his union is willing to engage in safety strikes to protect against the threat of pro-Trump rioters.

“If at any moment it feels like things are going to go awry, then the union is going have to do what the union is going to have to do,” says Jackson. “This is the nation’s capital and what happened here last week never should have. So we as a union are fighting to make the transit system safe for all the workers in DC who need to use it every day to get to their jobs.”