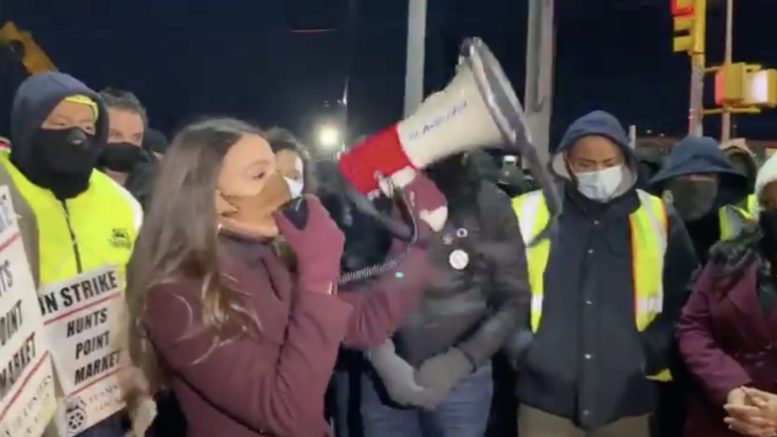 On Saturday workers followed through with the strike after their employer denied them a $1-an-hour raise despite being deemed essential workers during the pandemic.

More than 60% of New York’s produce comes through Hunts Point Produce Market, the largest wholesale market in the world. According to their union, Teamsters Local 202, six of their workers also died from COVID-19.

“These are the essential workers who went to work every day through the worst of the pandemic to feed New York,” Daniel Kane, president of Teamsters Local 202 said in a statement. “All they are asking for is a dollar-an-hour raise so they can feed their families.”

Then last night, a Payday reader tipped us off to a video of Congresswoman Alexandria Ocasio-Cortez rallying a crowd of picketers while handing out cups of Bustelo coffee and hot chocolate where workers were picketing at 772 Edgewater Road, Bronx, NY.

Ocasio-Cortez applauds the workers for their courage and tells the community in her district in the Bronx to “pull up” to support workers.

“For anybody, who might be watching or hearing, who isn’t part of the union, who is just in the neighborhood, pull up. Pull up,” Ocasio-Cortez shouted to a crowd of dozens of strikers clapping and cheering.

Ocasio Cortez urged folks who might be watching to swing by the picket line and bring down hot chocolate as she did for the workers.

We amplified the video on our Twitter feed and quickly went viral with Ocasio-Cortez tweeting it out to her over 11 Million Twitter followers.

In an atmosphere where workers have increasingly turned to striking, the Hunts Points Produce Market was able to quickly find massive community support.

On Wednesday night, a 21-car-long train carrying produce showed up at the market, but when the locomotive engineer for CSX, a member of the Teamsters from Ohio, heard that the workers were on strike, he refused to deliver his produce.

“The locomotive engineer said, ‘We’re Teamsters too,’ turned the freight car around, and headed back to Ohio,” said a worker on a video released from Teamsters Joint Council 16.

Under many Teamsters union contracts, union members are allowed to refuse to deliver cargo across the picket line, increasing the likelihood that sympathetic truck drivers and railroad drivers could put pressure on the company by refusing to deliver products.

In the video, one of the striking Hunts Point workers is seen marching back to a growing crowd of his co-workers.

Be the first to comment on "Following Arrests, AOC Rallies 1,400 Striking Grocery Workers As Railroaders Refuse to Deliver Produce in Solidarity"