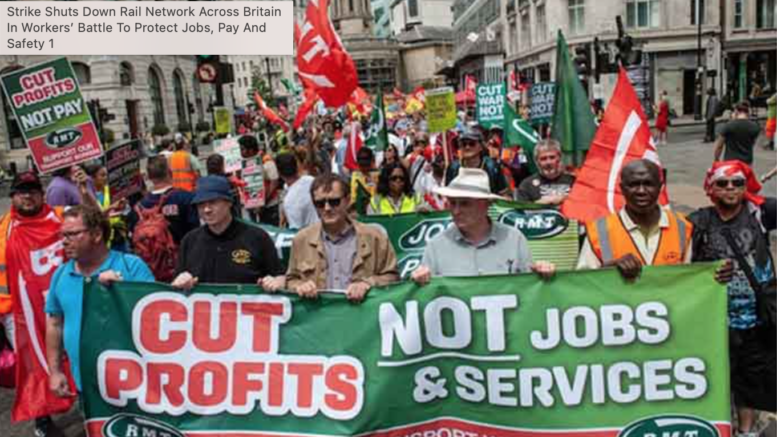 Welcome to another international labor newsletter.

Donate to help us cover international labor news including our trip to Brasil this year.

More than 40,000 workers walked out of their jobs this week in Britain’s largest rail strike since 1989.

Staff from ​​Network Rail and 13 other train operating companies are fighting for a pay rise of at least 7% as skyrocketing inflation eats into their wages. Rail bosses are offering a maximum of 3% with conditions that will affect new hires.

Rail workers went on 24-hour strikes on Tuesday and Thursday, and one more is planned for Saturday. The Rail, Maritime and Transport Workers’ union boss Mick Lynch told the BBC Saturday’s strike will likely not be the last if they do not get a settlement.

In response to the strikes, the British government has allowed employers to replace striking staff with temporary workers. It also raised the amount unions can be fined for “unlawful” strike action from £250,000 to £1 million.

Tunisia saw multiple strikes over the weekend as hundreds of protestors demonstrated against President Kais Saied’s upcoming referendum, and a separate decision to sack 57 judges.

On Saturday, the Free Constitutional Party and supporters took to the streets of Tunis to oppose Saied’s decision to change the country’s constitution so that it will give the presidency more power. He intends to put the new constitution through a referendum on July 25.

“Tunisians are starving, public finances are collapsing, but Saied does not care. He only focuses on a personal project to impose his constitution.. we will not accept that,” Abir Moussi, the leader of Tunisia’s Free Constitutional Party, told the crowd.

Saturday’s protest was followed by further demonstrations on Sunday, led by the coalition Salvation Front.

Tunisia is currently suffering from high unemployment and inflation, which have risen to 18.4% and 7.5% respectively. Last week, the country’s largest trade union, three million-strong UGTT, led a nationwide strike against Saied’s plans to freeze wages and cut subsidies.

Over the weekend, Tunisian judges also extended their strike for the third week to protest Saied’s firing of 57 judges, which the Tunisian Judges’ Association said was politically motivated.

On Monday, Zimbabwe’s teachers and healthcare workers went on strike to demand the government pay them in U.S. dollars as the country suffers from hyperinflation and sees their currency rapidly devalued.

Healthcare workers, who are on an indefinite strike, held placards and danced outside Zimbabwe’s main hospitals on Monday, Al Jazeera reported. One union leader told the news outlet the first day was a success. “We have been invited for a meeting by the Health Services Board and the ministry. This had not happened in the last 14 months,” Dr. Tapiwanashe Kusotera, the leader of Health Apex, an association of healthcare unions, said.

“We just want to live a better life. Some of us are married, some of us have got kids, different responsibilities. So with the current salaries, we cannot afford” to support our families, Denford Masona from the Zimbabwe Hospital Doctors Association told Voice of America.

The country’s teachers’ union began a five-day strike on Monday.

Both groups of public workers are asking to be paid in U.S. dollars at $540 a month — the amount they used to earn in 2018 before the country re-introduced its local currency. Nurses now earn about $80 a month. Zimbabwe’s inflation rate jumped to more than 130% in May.

Read more at The East African

Zakir Hossain, who often speaks out on migrant worker issues in Singapore, did not get his work visa renewed in retaliation for his advocacy work.

In one Facebook post last October, Hossian, a construction worker from Bangladesh who had been in Singapore for 19 years, said workers were being treated as “slaves” and the dormitories they lived in were “work camps.” He also said soldiers and armored vehicles surrounded a dormitory where riot police were called in after unrest broke out.

Hossain thinks his permit was not renewed because he speaks out about issues like high agent fees and workplace harassment.

“Singapore is my home away from home, and I want her to do better as a country. For that, she has to learn to listen to its people, even migrants,” he continued.

In a statement, Singapore’s Ministry of Manpower claimed Hossain’s Facebook post was “false” because there were “no soldiers, let alone armored vehicles,” even though a Channel NewsAsia report shows police officers in protective gear and armored vehicles outside the dormitory.

“The ability of a foreigner to work in Singapore is not an entitlement,” the ministry wrote. “He has over-stayed his welcome.”

Workers at Chile’s state-owned miner Codelco — the largest copper producer in the world — launched an indefinite strike on Wednesday after the government forced a foundry to close.

The Copper Workers Federation, which represents around 50,000 workers, is demanding the government invest $54 million to upgrade the plant so that it meets top environmental standards.

The smelter shut down after more than 100 people in the area fell sick from sulfur dioxide poisoning.

The union’s president Amador Pantoja said, per a report from Radio Universidad de Chile, the government should “give it what Chile really needs” to help it get out of poverty.

The U.K’s United Sex Workers has raised £20,000 to fund a judicial review of Edinburgh City Council’s strip club ban. Unless overturned, the rule would force all strip clubs in the city to close in April of next year and bar new clubs from opening.

According to United Sex Workers, around 100 strippers who work in the city’s four sex clubs will lose their jobs, putting their lives at risk.

“By removing workers’ livelihoods during an unprecedented cost of living crisis, local councils are forcing us to make the choice between poverty or more dangerous, underground sex work,” the organizer, who goes by Audrey, told the Edinburgh Times.

If they successfully overturn the ban, Audrey said, this would “ensure thousands of workers’ rights” as “venues are under attack across the U.K.”

One councilor stood with the sex workers, saying the ban “was a moral decision based on spurious arguments.”

“It’s not our job to tell women where they can and can’t work, especially in the current economic climate,” said Susan Rae, a Green councilor for Leith Walk, a ward in Edinburgh. “They didn’t like it when they heard strippers were sending their kids to private school along with their kids. The judgemental tone of the debate was terrible.”

Alright folks, that’s all for today. Donate to help us cover our travel costs to cover the presidential election in Brasil this fall. Please if you can, sign up as one of our 694 recurring donors today.