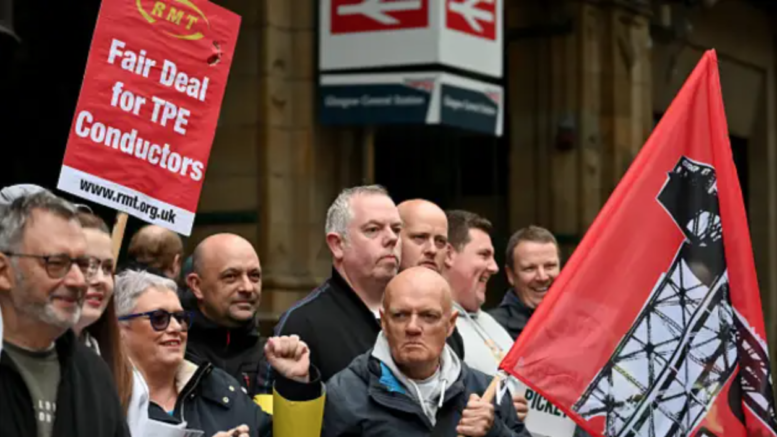 Welcome to another international labor newsletter. We’re here to give a short update about the U.K. rail strikes and movements in Australia and Mexico.

Donate to help us cover international labor news including our trip to Brasil this year.

Fresh from three 24-hour national rail strikes involving 40,000 signallers, maintenance, and train staff last week, the U.K. could see another round of rail strikes in late Julylate-July, The Guardian reported.

The Rail, Maritime and Transport (RMT) union and rail operators, including Network Rail, have yet to make any deals. The union said Network Rail is threatening to cut safety-critical jobs and increase working hours.

The rail operator has also refused to meet the union’s demand for a 7% pay raise, offering only a 2% rise. The country’s inflation rate hit a forty year high of 9.1% in May.

“If we don’t get a settlement, it’s extremely likely there will be [further strikes],’ RMT’s leader Mick Lynch told the BBC.

U.K.’s Trades Union Congress head Frances O’Grady said the government, which has openly criticized the union, is trying to stoke a “culture war.”

“It’s more about being seen to pick a fight — with hostility, sowing division. That is the point. So policy success [averting the strikes] isn’t really the goal,” O’Grady said.

Australia’s Teachers, Nurses to Strike Over Pay and Staff Shortages

Nurses and midwives from 80 hospitals in Australia’s New South Wales state are set to go on strike on Tuesday after their demand for pay raises in line with inflation and better staff-to-patient ratios were unmet in the most recent state government’s budget.

Members of the NSW Nurses and Midwives’ Association will stop work for between two and 24 hours, ABC News (Australia) reported. This would be the third time they go on strike this year.

Two days after Tuesday’s strike, the state’s public and Catholic school teachers will also walk off their jobs over similar demands. The teachers held their last protest in May.

The government has promised to raise public sector wages by 3% this year, and possibly another 0.5% next year. But nurses and teachers say the raise is inadequate. The country will likely see prices rise by 7% this year, its Treasurer Jim Chalmers said.

In response to the strikes, NSW finance minister Damien Tudehope will introduce a bill in state parliament that would exponentially hike the fines imposed on unions for unauthorized strikes.

“It’s completely bloody-minded. The worst sort of bullying of the workforce I’ve seen in many years,” Mark Morey, the secretary of Unions NSW, said about the bill.

Mexico’s Nacional Association of Actors said the union is investigating the car crash that killed two actors and injured several other cast and crew members who worked on the Netflix series “The Chosen One.”

Actors Raymundo Garduño Cruz and Juan Francisco González Aguilar died after the van they were in crashed in Mexico’s Baja California Peninsula on route to the local airport on June 16th.

A labor secretary from the union Alejandro Calva said they had not received any complaints about safety issues related to the production, the Los Angeles Times reported.

“There’s no evidence that the driver wasn’t rested, that the company had bad production practices,” Calva said, referring to RedRum, the production company behind the show.

But friends of the deceased actors claim there were problems with the production.

“This was no ordinary accident, the cast had been complaining openly about the logistical and transport issues,” writer Rick Zazueta wrote on Facebook. “The conditions of the van were completely unfit for the purpose of transporting people,” including worn-outworn out tires and a loose steering wheel.

Alright folks, that’s all for today. Donate to help us cover our travel costs to cover the presidential election in Brasil this fall. Please if you can, sign up as one of our 702 recurring donors today.

Be the first to comment on "U.K. Rail Strikes Could Continue –  Australia’s Nurses and Teachers Set for Walkouts This Week – Mexico’s Actor Union Investigates “The Chosen One” Accident"