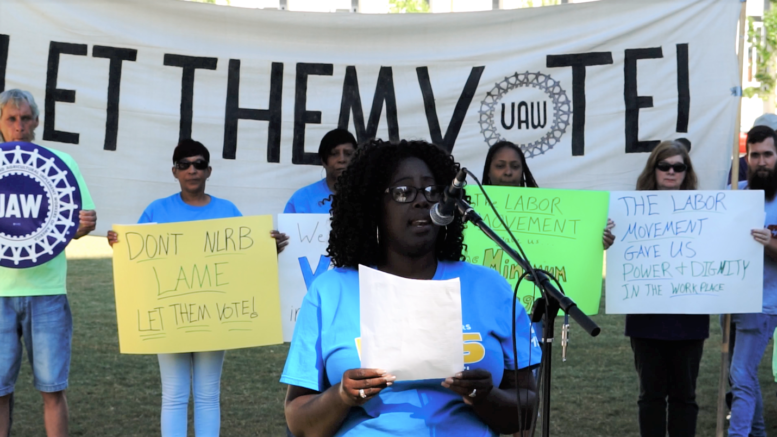 Despite months of legal delaying tactics by Volkswagen and the Trump-appointed National Labor Relations Board (NLRB), the NLRB finally announced today that they would conduct an election for 1,700 workers at Chattanooga facility from June 12th-14th.

The election sets up one of the most high profile union votes in a decade in the South.

Despite trying for nearly three decades, the UAW has never been able to win a union election at transplant foreign auto plant in the South. A win at Volkswagen’s plant in Chattanooga could open the door to more union organizing throughout the South.

In 2014, the UAW narrowly lost a vote at Volkswagen’s plant by 43 votes. Now, five years later, after a massive wave of #RedforEd teacher strikes have galvanized community support in the South behind organized labor, the UAW is holding a union vote in a very different political environment.

During the first campaign at Volkswagen, the UAW sought a union neutrality deal, which would have prevented them from speaking poorly of the company. This time around, the UAW has sharply criticized the company time and time again.

The UAW has even put TV ads and brought in additional organizers to mobilize community support behind the union effort.

As the election approaches in a little over two weeks, UAW members are excited for the opportunity to change the plant.

“They really seem scared of the accountability that a “yes” vote will bring,” said UAW Local 42 on their facebook page. “Now we have the opportunity to make a change for the better!”