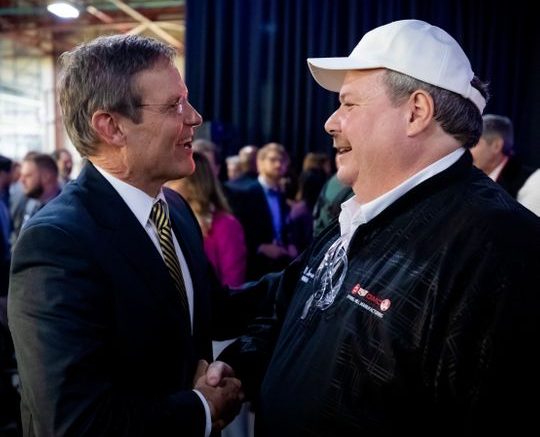 Following anti-union remarks at Volkswagen’s plant in Chattanooga, the UAW is accusing Tennesse Governor Bill Lee of hypocrisy given his previous praise of the UAW at GM’s facility in Spring Hill, Tennesse.

On Monday, Tennessee Governor Bill Lee visited the plant and gave a speech about his jobs plans for the state. During the speech, Lee advised workers against unionizing.

Halfway through his twenty-minute remarks about his job plan, the Governor took a few moments to address the looming union vote at Volkswagen; advising workers to vote against it.

Lee, who owned a large construction company, before becoming Governor of Tennessee this past winter, added that he felt a union made it more difficult to change things in workplaces; echoing the common anti-union refrain that unions are an outside party that impose unnecessary burdens and regulations on workplaces

Lee’s comments were interrupted with loud boos by the crowd. After a serious of interruptions, Lee struggled to regain control of the room.

“We are very fortunate to be in a state that has low debt, that has pay-as-you-go, that has low-income taxes, that has the work environment that we have in this state,” Governor told the crowd.

“Don’t forget low wages!” interrupted a worker shouting from the back of the room.

“We are very fortunate to live in this state and I tell you that I believe that the Lord has given us great things,” Lee says to rapacious applause from all sides.

The UAW said that Lee’s comments were totally hypocritical given that he praised the UAW and sought a closer working relationship at GM’s unionized plant in Spring Hill, Tennesee.

Recently, Governor Lee has met with UAW Local 1853 Chairman Mike Herron, who represents approximately 2,000 UAW members at GM’s plant in Spring Hill, Tennesse. The governor has sought ways to collaborate with the union there.

“Governor Lee has embraced and spent time with our UAW leaders at the GM Spring Hill plant in Spring Hil, Tennesse, why wouldn’t Governor Lee want Chattanooga workers to have the very same rights that those Spring Hill, Tennessee workers have and that every VW workers in the world”

Be the first to comment on "UAW Accuses Tenn. Gov of Hypocrisy in Anti-Union Remarks at VW Plant"