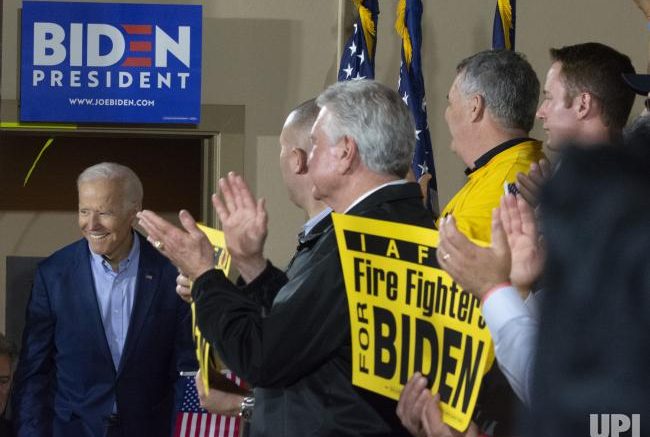 Biden at his campaign kick off in Pittsburgh in 2019 (UPI)

PITTSBURGH, PA. – The day of Joe Biden’s presidential announcement begins with a 78-year-old former pro-wrestler nicknamed “Jumping Johnny” Defazio, clad in a designer suit, struggling with the help of a cane to get up the steps at a union rally in downtown Pittsburgh. Defazio, the longtime director of the Steelworkers Union in Pennsylvania and Council President of the county government in Allegheny, is flanked by nearly a dozen white, middle-aged union leaders dressed in suits.

“Nothing says labor to me like a $700 suit,” jokes Sue Scanlon, a bus driver and proud member of ATU Local 85.

For Joe Biden, though, this is his base: the type of union leaders that show up to rallies in suits.

While the vast majority of the nation’s union leaders are pledging to remain neutral in the 2020 Presidential Primary, a small but vocal minority of union leaders in the white male led construction, firefighting, and fossil fuel-heavy industries have indicated that they intend to support Biden.

Instead of focusing on building support among women, communities of color, and millennial socialists, labor’s old guard gathered in Pittsburgh on Monday to declare that a moderate like Biden is the best candidate for bringing white working-class voters back into the Democratic Party in places like Western Pennsylvania.

“[Biden] is someone who, whether you are far-left or to the center, he runs on issues, the economy, infrastructure, that connects you whether you are an SEIU member or a carpenter,” says Pittsburgh-area Labor Council President Darrin Kelly, wearing a diamond-studded lapel pin of his union, the International Association of Fire Fighters, which endorsed Biden on Monday.

Kelly went on at length to express his frustration with presidential candidates who are supporting the Green New Deal.

“When you have a situation where you are taking away from someone’s ability to feed their family that is not going to be looked at favorably,” says Kelly. “When you put something together that is going to cost 100,000 energy jobs, I am going to be against it, I’m going to be vocal against it and not welcome it in Western Pennsylvania.”

Kelly, a native of the rough-and-tumble working-class and predominantly Irish-Catholic neighborhood of Greenfield, rejects the idea that Biden’s advocacy for mass incarceration policies could dampen enthusiasm needed in communities of color or that Biden’s treatment of Anita Hill could dampen turnout among women.

After the Workers’ Memorial Day rally in downtown Pittsburgh, the crew of suit-clad labor leaders makes their way over to Teamsters Local 249, a union which has faced heavy criticism from union democracy activists for stripping its members of hard-earned pensions.

Last September, the union applied for approval from the federal government to cut the pension benefits of over 21,000 Teamsters members in Western PA. The union was only able to do that due to a law that Biden had helped to pass, allowing labor leaders in poorly managed union-run pension plans to cut benefits without the approval of their members. (A law which was opposed by progressives like Senators Bernie Sanders and Elizabeth Warren and Teamsters for a Democratic Union activists.)

Inside the union hall, 72-year-old firefighters union president Harold Schaitberger is the first to warn union members not to ask for too much in 2020.

“This may not be popular in parts of the Democratic Party, but we can’t have a nominee that is too far left–it’s just simple,” says Schaitberger. “Sure, there are candidates who have high-minded ideals, maybe honorable ideals, but little chance of winning and there’s no question that the candidate that can win, the candidate who can and will be our next President, is Joe Biden.”

Al Hart, a former GE worker and UE union organizer who spoke at the Sanders’ rally, says he thinks it will be tough to attract support for Biden in Western Pennsylvania.

“Biden voted for NAFTA, which cost a half a million good-paying manufacturing jobs and also forced us to fight against wage cuts and it made it much harder to organize,” says Hart. “I was negotiating contracts after NAFTA and every manufacturing company had a credible threat that if you don’t cave into what we want, we are going to Mexico.”

However, Biden’s vote for NAFTA isn’t spoken about at the kickoff rally. Instead, Biden uses his remarks to paint himself as a champion of organized labor.

Shortly after taking the stage, Biden cheers out, “I make no apologies I am a union man.”

Later, Biden calls on the hospital chain UPMC to stop busting the SEIU’s attempt to unionize there.

“Stop the union busting. Stop,” Biden cries out as he explains what he would tell hospital CEOs as President.

However, just last Thursday, Biden held his first fundraiser with Steven Cozen, the owner of the union-busting law firm Cozen O’Connor, serving as a host. Cozen O’Connor has previously taken on the Pennsylvania Association of Staff Nurses in their attempts to organize hospitals.

Today though, Biden is honing his message for a very different crowd of potential supporters.

“I am with you. I have your back, and as President, I will fight like the devil to make sure unions are not [fought] unfairly,” Biden tells the assembled union crowd.

After the speech, I catch up with Johnny Defazio as he struggles his way down the steps of Teamsters Local 249.  “Jumping Johnny” Defazio appears ecstatic about Biden’s speech. He says it’s time for the Steelworkers to endorse Biden.

“He is for working people, it seems. I like him,” exclaims Defazio!

When I ask Defazio about the former Vice President letting the owner of a union-busting law firm host a fundraiser, Defazio looks surprised.

“I didn’t know about that,” says  Defazio. ”I don’t agree with that and I don’t like these union-busting attorneys.”

Still, Defazio is unfazed. “Biden stands for the working man and woman,” he tells me.

I ask if Biden’s support of NAFTA will hurt him with Trump voters in Western Pennsylvania, but the longtime Pennsylvania Steelworkers Union leader simply shrugs it off.

“It might have a little bit, but I think people forget about that,” says Defazio.

Finally, I ask him if he worries that Biden’s treatment of Anita Hill will alienate women voters and if Biden’s push for mass incarceration policies will alienate communities of color needed to win the voters.

“I really don’t buy into that,” as Defazio shrugs me off and begins to walk away.

As Defazio leaves, he passes by Lou Berry, a 60-year-old African American community activist, handing out flyers for Defazio’s 29-year-old opponent in the upcoming County Council election, Bethany Hallam, who is backed by UNITE, a political PAC founded to take on establishment Democrats in Pittsburgh.

“He is entrenched in his beliefs. He keeps marginalizing people of color and acting like we don’t matter–like our votes don’t matter–and they think they will win because of it,” says Berry as he shakes his head.